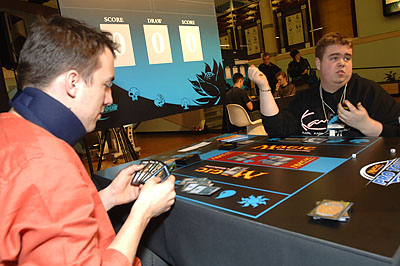 Olivier Ruel and Rasmus Sibast both came into Round 6 on the brink of elimination.his is the final round before the first set of cuts. With 12 points needed to advance to the next draft, I confirmed with both players that it was an elimination round for them. Olivier laughed, "This is my fourth elimination match today!" … "I lost my first two matches, and then lost the first game of the next match, and the second game I missed my land drops on second and third turn!"

In what turned out to be the blue-black mirror match, Rasmus was first and came flying out of the gate, suspending Corpulent Corpse then Riftwing Cloudskate and playing a morph and then Plague Sliver. Ruel used an Assassinate to kill off the morph (Fledgling Mawcor) but otherwise had nothing, getting a land bounced back to his hand when the Cloudskate joined the board.

Laughing in a frightened kind of way, Ruel shot out, "Is that the best you have?"

Rasmus had to smile. "Probably!"

Olivier laughed outright this time. "I hope so!" Replaying a fourth land, this time he had Mirri the Cursed but was so behind on tempo and life that he had to pass the turn and keep the vampire on D. Next in for Rasmus was the Corpulent Corpse. Grabbing up all of his creatures and threatening to swing with all four, Olivier winced.

"You wouldn't!" he said defiantly. Unfortunately for him, Rasmus then did put all his guys in the red zone, drawing a sheepish, "You did."

Mirri ate the Corpulent Corpse (tastes like zombie chicken?), but Olivier was down to a paltry two life. But Rasmus wasn't done yet, playing Rathi Trapperand a Skulking Knight to his pile of beaters.

Crazily enough, Olivier had quite a solid hand. Holding Sudden Spoiling and a fist of other stuff that just wasn't quite up to the task at hand, Olivier shook his head. "I didn't think I was losing this one." 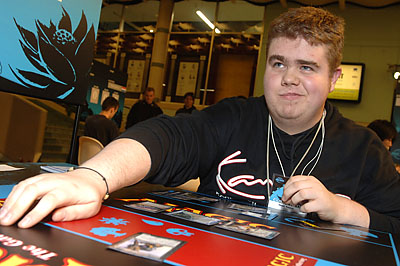 Olivier took good advantage of being on the play, leading with suspended Ephemeron and Trespasser il-Vec. Rasmus had a suspended Riftwing Cloudskate followed by Skulking Knight, but the Knight went down to a mighty Midnight Charm. Spiketail Drakeling joined the French team to Rasmus's Mana Skimmer, but the Drakeling got bounced next turn when the Cloudskate joined the party. Passing the turn with plenty of mana up, Rasmus looked like he was pulling away when he had Cancel for the Errant Ephemeron coming in. His Skimmer fell to Assassinate, but Pit Keeper and his own Trespasser were there for reinforcements. However, through all this Olivier had been shepherding in what damage he could, mostly with his Trespasser. Mirri the Cursed came down and charged in with her Trespasser friend, making it Olivier 14, Rasmus 5. Rasmus sent right back, putting it at Oliver 7, Rasmus 5.

With the game now white-knuckle tight, Rasmus added another Trespasser to his board, hoping to block by discarding and stopping the other Trespasser, which would get Rasmus another turn. However, after the Trespasser gained shadow to try and block Olivier's Trespasser, Olivier had a Sudden Spoiling to remove the shadow and guarantee that Mirri and his own Trespasser could get through for the lethal final blow.

That left the final game to decide who was staying and was getting eliminated. Rasmus was on the play, and Olivier would need to break serve in this blazing black-blue mirror.

This game developed into a nail-biter that went considerably longer than the previous two. Rasmus was a bit slow out of the gate, laying out just land his first couple turns. That worked perfectly for Olivier's hand, which started with a Dreamscape Artist that played all-star for much of the game. Bumping Olivier's mana turn after turn, somehow the activation always allowed just the right mana for a powerful play like suspending Ephemeron or discarding out instant-speed madness monsters like Muck Drubb. 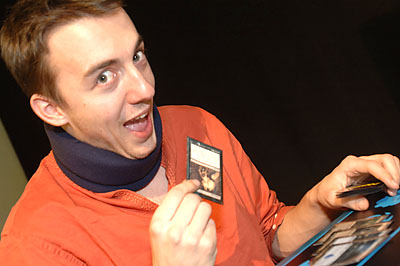 …but Olivier has reason to smile.

As the game progressed, it turned into a face-off between the tricky, spell-driven version of blue-black and the blunt implement approach of big or hard to block beaters. As the game swung back and forth, both players began to get low on cards. Olivier was down to just 7 life to his opponent's 17, but he had the slightly better board - if he could just get a good answer for a Trespasser that kept hammering in, and a Rathi Trapper that kept making defense problematic.

In the end, it was the overwhelming power of the French player's spells that proved strongest. A Sudden Spoiling put a dent in Rasmus's offense, and then a copy of Kor Dirge next turn stopped it altogether. Moving to offense, Olivier next got to use another copy of Kor Dirge to devastate Rasmus's position. From here Rasmus was down to just the mana in play and in his hand as a feeble Corpulent Corpse watched on from suspend-land with 3 counters still to go. Rasmus did what he could to hold on, but the three huge spells in a row were too much for his creatures to handle. A turn later and Olivier was up three creatures to none in play, and a turn later was all it took for him to put the match away and lock in his slot for Day Two.