Round 6: Yusuke Sasaki vs. Ryoma Shiozu 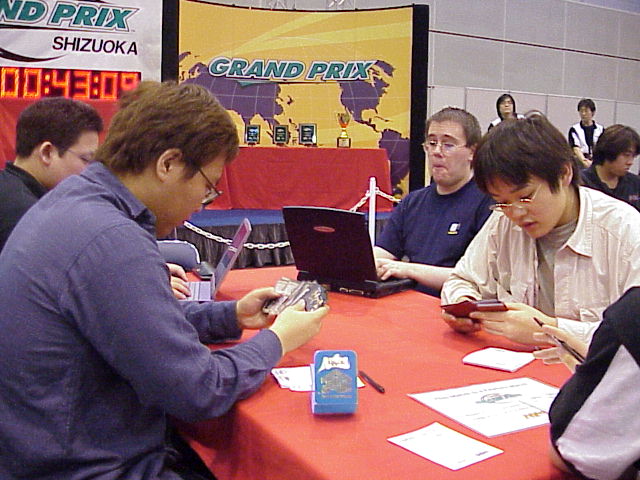 Nagoya's Ryoma Shiozu is on a hot streak as of late, with Top Eights at GP: Yokohama and GP: Kobe. His opponent is Yusuke Sasaki made it to Pro Tour New York 2000 (well remembered as Pro Tour: Lin Sivvi) and has been working on making his way back to the Pro Tour circuit.

Shiozu kicked off with a light speed victory in Jan-ken-pon to defeat Sasaki's rock with his mighty paper. Shiozu opted to play first. The two were content with their opening hands, and Shiozu opened with a first turn Diligent Farmhand. He attacked with it, then sent it to the great big cornfield in the sky as he fetched out a second island. Sasaki groaned as Shiozu played a turn 3 Nantuko Disciple. 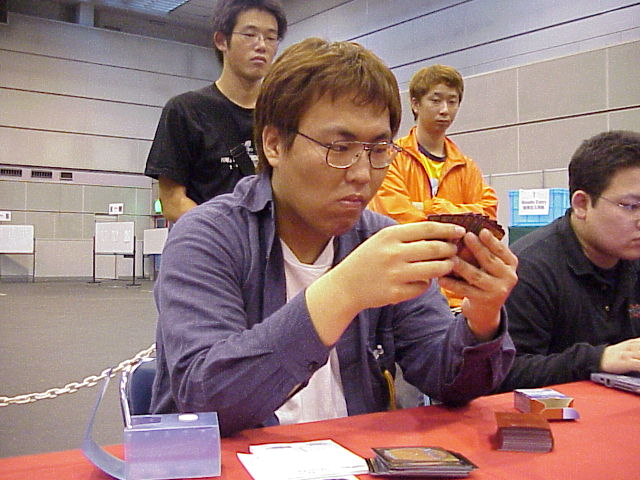 Shiozu continued to invade Sasaki's table with the Nantuko Disciple and a Spellbane Centaur. Sasaki managed to play his own Nantuko Disciple, but the beats just didn't stop coming, Gorilla Titan stomped onto the table on Shiozu's side, and the Spellbane Centaur knocked Sasaki down into single digits. A Disciple-boosted Twigwalker cleared the Centaur off the board, but that wouldn't solve the question the Gorilla Titan posed. A Muscle Burst exchange polished Sasaki off. Sasaki's Thermal Blast in hand would have taken a lot of pressure off him in the slow paced game, but he never found a mountain.

Game 2 had Sasaki starting. He dropped a turn 2 Werebear. Shiozu had forest, then island, but no play. Sasaki then made a key error by attacking with the Werebear, then casting Krosan Avenger. If he had thrown out the Avenger earlier, the Werebear could have saved him from a 1 strength Syncopate. This chastisement was only the beginning of Sasaki's downfall. 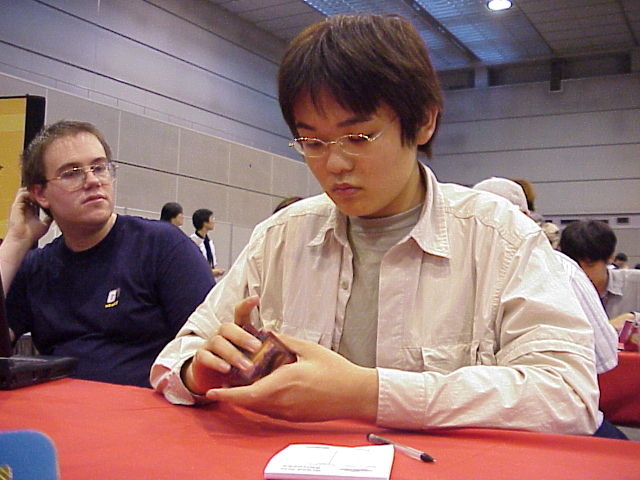 With no further mana commitments, Shiozu dropped a Leaf Dancer. The two players then drew land, lots and lots and lots of land. For five turns no plays aside from Werebear and Leaf Dancer playing tit for tat happened. It was as if the mana had suddenly turned off. Unfortunately for Sasaki, he had yet to draw a red mana source to power the Thermal Blast and Chainflinger in hand.

Desperately needing an answer to Leaf Dancer he Refreshed his Werebear. Shiozu would not hear any of that and Repelled the Bear to the top of the library. However, Sasaki managed to hold out long enough to draw Gorilla Titan, which ended the game in short order. If Shiozu had ever drawn a source of red mana in either game, the contest would have been a lot closer.