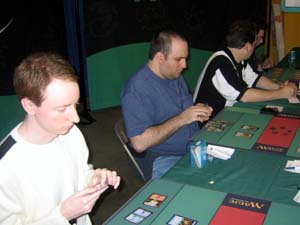 Mike Turian farewell tour has rolled into the nation's capitol. His opening acts for this gig include Gary Wise and the future of CMU. Along with Turian going to Seattle to join his future wife Rachel and Nate Heiss going to the DC area to move in with Mike Flores' favorite magician John Shuler, Eugene Harvey is done with his education at Carnegie Mellon and is returning to be a New Jersey resident full time. The once venerable CMU powerhouse will soon be bereft of their leadership and experience. Gary has also announced that he is going to move onto other pursuits once his current string of qualifications plays itself out.

This is the same team that made it to the quarter-finals of the last team Pro Tour. They were sitting across the table from David Rood--one third of 2020 the team that made it the finals against Phoenix Foundation the team Pro Tour before that one. With Elijah Pollak no longer playing Magic he and Steven Wolfman were left to their own devices to find new teams. David turned to two names from Canada's past--a pair of players who have quit Magic and come back again long before it was fashionable--Terry Tsang and Gab Tsang.

Terry was facing off against Eugene Harvey in the A seat and was somewhat fuzzy on the details of his Magic resume, "I was Canadian Nationals Champion…I think it was 2000 or 2001. At Pro Tour New York I was Top 8 in…was it 1999?--God! I am old!"

Terry's first play was Mask of Memory off of a pair of Plains while Eugene was showing Island and Mountain. Neurok Prodigy hit play for Eugene the next turn but Terry was out of land and passed the turn with a grimace.

Harvey flew over for two points and tapped out--he had played a Great Furnace--for Thoughtcast. Terry found his missing land and played a Razor Golem. Harvey attacked for two and Electrostatic Bolted the Golem. Terry had a fourth land for his Skyhunter Patrol but Harvey was ready EOT with Barbed Lighting.

Harvey untapped and did another two points in the air. My Enforcer joined the team but Terry Arrested it. Another two points in the air preceded Quicksilver Behemoth on the CMU side of the table. Terry scraped for a foothold in the game and cast Loxodon Mystic. Eugene got in for six on the next turn and when he replayed the Behemoth it was joined by a second Neurok Prodigy.

Terry's foil Slith Ascendant came down to guard the Canadian airspace. When Terry tapped the Behemoth and blocked one of the Prodigies Harvey saved it with a discarded Scimitar. He emptied his hand to replay it and also add a Clockwork Vorrac to the board. Terry was at four and he tapped the Vorrac with four points of flying in the air. Eugene was puzzled and looked over at Terry's life tally and it turned out there was minor discrepancy. They recreated the turns and it turned out that Terry was at a fatal four life.

Mike Turian took a quick game from Gab while Wise dispatched Rod in a similar fashion. The two veterans were surprised to find out that Harvey had won as well. "He hasn't won a match yet this weekend," laughed Gary.

Terry kept his opening hand but Eugene went looking for six cards he liked better. Terry had a turn three Slith Ascendant but Eugene kept it at bay with his Neurok Prodigy. Terry played out a Wizard Replica and Auriok Transfixer on his next turn while the mana-tight Harvey tapped out for Goblin Replica.

Terry played and equipped Mask of Memory on his Wizard Replica and got in for a point and the all-important two cards. Harvey did not have a fourth land but the Scimitar on his Prodigy was going to keep the flier at bay for the time being. That flier anyway--Terry untapped and cast a sixth turn Luminous Angel.

After Eugene reminded Terry to make a token the Angel put on the Mask and slipped into the red zone. Harvey sacrificed his Scimitar to Shrapnel Blast the Angel but Terry ravaged that plan with a Hallow that left the New Jersey native reeling. He had no blocks and Terry drew a pair of cards and played Skyhunter Patrol. 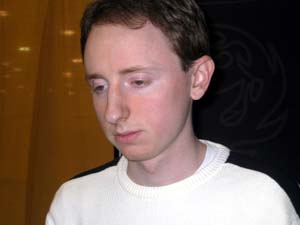 Harvey could do nothing but sit back on four mana and his Prodigy and Replica. When Terry attacked with all of his fliers, Harvey blocked the Angel with Prodigy and returned it by discarding Myr Enforcer. Terry attempted a Mirror Golem but it was Annuled. Harvey polished off the Angel EOT with an Electrostatic Bolt.

Harvey ate the Slith a turn later with his Prodigy--this time saving it with an Elf Replica. The card advantage of the Mask was too much for Harvey to keep up with though and soon thereafter he was worn down by Terry's air force.

Harvey came out of the gate with a Scimitar and Vedalken Engineer while Terry had a Talisman. Turn three saw Harvey play an Elf Replica and draw two cards with Thoughtcast. Terry played a Wizard Replica with blue talisman mana at the ready.

Harvey 's Engineer powered out an Enforcer and left him enough mana to also make a Slith Firewalker. He equipped the Elf Replica and banged in for three points. Terry tapped out to make a turn four Loxodon Mystic.

Harvey sent his Elf and Enforcer into battle and Terry took seven. Harvey emptied his hand to play a Quicksilver Behemoth and kill the Mystic with Barbed Lighting. Terry played a Transfixer, Gold Myr and Echoing Ruined the Enforcer. Harvey kept on coming though this time with Behemoth subbing for the departed Enforcer. Terry put Wizard Replica, Transfixer, and Myr in the way of the 3/3 replica and Harvey elected to let the 1/3 live.

He replayed the Behemoth and moved the Scimitar onto the Firewalker. Terry's deck yielded Vulshok Gauntlets and he slapped them on his flier. Eugene did the math and forced Terry to chump block the Behemoth by equipping it with the Scimitar and attacking with his two 1/1s as well--Terry was at six and he fell to four.

Terry tried to mount a last stand with a Mirror Golem but when he tapped out Eugene showed him the Shrapnel Blast in his hand. 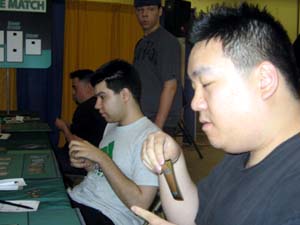 Gary Wise fell to David Rood but the Harvey victory meant they would remain at the top tables with a 6-0 record.