Round 6: Zvi Mowshowitz vs. Eric Franz

Unfortunately, Sideboard was unable to provide coverage for this Brainburst Premium Writer feature match. We simply didn't have the $3 to pay dues.

Our apologies,
The Management. 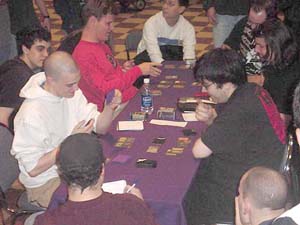 Actually, the truth is that three out of three feature matches I've covered today involved savagely one-sided facesmashery. Which of the two competitors emerged victorious from this battle royale?

Eric played first, and needed to go to Paris. His new six card hand came with only two ands, and a third was not forthcoming until turn six. Zvi, on the other hand, held onto a hand with a Daru Healer, Spitting Gourna, and Taunting Elf. He proceeded to peel and after land off the top of his deck, giving Franz time to recover. Both of them traded morphed Healers, leaving on the Gourna on the table—until Zvi drew into a Sparksmith. Eric still couldn't draw the good, so when Zvi played a turn eight Centaur Glade with eight lands on the board, Franz scooped.

One of the 'quick questions' for the players was "which six casting cost legend do you most want to open in Onslaught Limited". A good number of players answered "can't I just have Sparksmith instead?" This game proved the power of the descendent of Fireslinger. Turn two Sparksmith, turn five Goblin Taskmaster allowed Zvi to kill every last one of Eric's early creatures.

Dive Bomber, shot down by the goblin.
Glory Seeker, sent to a fiery grave.
Morphed Whipcorder didn't get a chance to do much rebelling.

All the while Zvi was free to cast monsters such as Snarling Undorak. Franz attempted to stop the bleeding with a Pacifism and a Treespring Lorian, but they were met with Akroma's Blessing and Wave of Indifference, ending the game on turn seven.