Round 6: Zvi Mowshowitz vs. Mike Long 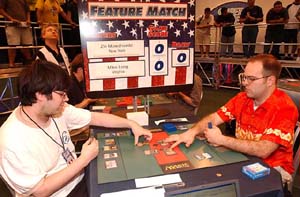 A long, long time ago in a galaxy far, far away Mike Long owned U.S. Nationals. He had a reserved seat on the National team and won a lot of money along the way. Two years ago his fall from grace also began at U.S. Nationals. Lately, Long seems to have gotten his game back into shape. He got a Top 8 at a Grand Prix and returned to the Tour. Now he's back at his former stomping grounds and he was 3-2 when he sat down to play Zvi Mowshowitz in a round 6 feature match. Both players have blue-green beatdown decks, but Long's includes a splash of white, giving him Mystic Enforcers where Mowshowitz has Aquamoeba.

Between rounds 5 and 6, I was talking with Pat Chapin, Alan Comer, and Scott Johns about an imaginary club where all the elite creatures in Standard hang out together. Flametongue Kavu and Wild Mongrel are members of The Club. And Psychatog is no longer the honored guest speaker anymore, but he is certainly still a member. Birds of Paradise has been a member of the club longer than anyone. He's kind of quiet – sitting in the back and not really stirring up much trouble, but he does control the finances for all the other members ... helping them pay for whatever they need. Nightscape Familiar is the toady – he doesn't really deserve to be a member on merit, but his buddy brings him along so much that everyone just accepts him as one of them. Spiritmonger keeps applying for membership, but he never actually gets let in. 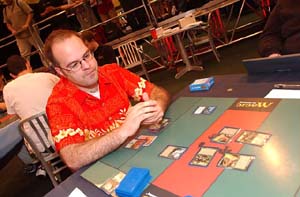 Mike Long had to take a mulligan before game 1, but on his second turn he played The Man: Merfolk Looter. He then proceeded to demonstrate precisely why The Club has rolled out the red carpet and let in The Man. First he tapped it, drew a card, and played Basking Rootwalla. Then he tapped it, drew a card, and played Arrogant Wurm. He did actually send Adarkar Wastes all the way to his graveyard on his next turn, but after that another Arrogant Wurm came into play. I didn't get to find out what amazing feats the Looter would perform next because Zvi declared "This game is unwinnable" and scooped up all his cards. 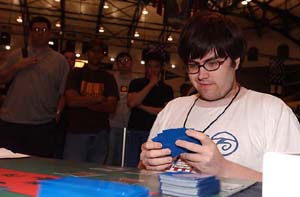 Long had not one, not two, but three Looters in game 2. However, Zvi got to go first and mulliganed into a Mongrel – Arrogant Wurm start. That put Long under some serious pressure and he felt forced to use two of his Looters as blockers, helping take down an Arrogant Wurm. (Spectators later questioned Long's decision to sacrifice two members of The Club. Long himself seemed angry when he forgot to loot before damage resolved.) Long then Looted away Circular Logic to stop a Basking Rootwalla, but Zvi had even more gas: a second Arrogant Wurm resolved and then a surprise Centaur Garden finished Long off a turn early.

Zvi had to mulligan again before game 3 and he had nothing better to do on his second and third turns than to pump his turn 1 Rootwalla. Long played a Mongrel, followed by an Unnatural Selection, followed by a Roar of the Wurm, followed by an Arrogant Wurm (after Rootwalla tried to fight with Mongrel). Zvi didn't even bother going through the motions after that, he just dropped his hand of land onto the table a extended his hand.