Round 6:
The Gitaxion Probe Test

With just two rounds to go, a clearer picture was forming as to who would likely make Day 2. Several teams, such as the Slovak Republic, were already well positioned at the top of the standings.

But there were a bevy of teams sitting right in the middle of the standings, including Martin Juza's Czech Republic squad and Justin Cheung's Australian team. The Czech team was in 25th place at 27 points, just inside the cut if it were to be made after Round 5. Australia sat outside the Top 32 in 44th place, but at 24points the team from Down Under was very much still alive to come back Saturday.

In fact, ignoring for the moment both players' teammates, a win here by Cheung would tie Australia with the Czech squad. That is how thin the margins are at this point in the competition.

But before we get started with all of the serious stuff, Juza was talking about how much his biggest fan enjoys reading coverage of him at Magic tournaments, and although we don't normally do this, we thought we'd make an exception to say hi to someone who he said had supported him through all of his tournaments: his mom.

Back to the action... 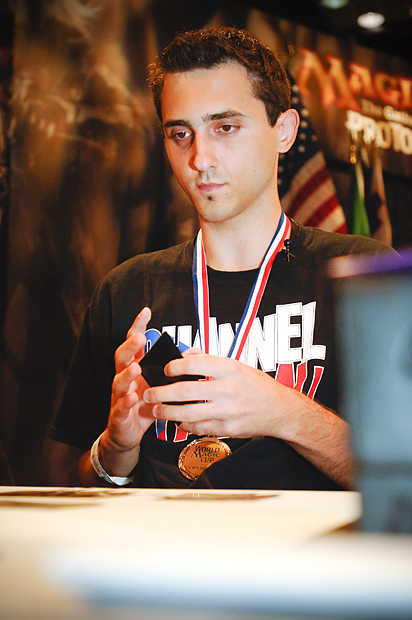 As players waited for the round to begin in the feature match area, Juza was visibly excited to get underway. And not just because his mom would be reading this. He was excited mostly at the prospect of surprising people with his deck choice.

"Do you have the Gitaxian Probe? I kind of want to show you my hand."

Cheung, for his part, was a picture of calm, smiling slightly at Juza's excitement, but refusing to give anything away. Cheung was playing Delver of Secrets, but he couldn't really know if Juza knew that or if he was fishing for information.

No Gitaxian Probe was forthcoming on turn one, but a Delver of Secrets was just the start Cheung was looking for anyway.

"Who do you think it'll be? What would you put me on?" Juza said before laying his first land, which turned out to be a Copperline Gorge.

Delver of Secrets refused to flip, but the promised Gitaxian Probe came out, revealing Whipflare, Slagstorm, two Glimmerposts, Solemn Simulacrum, and a pair of Titans in both red and green.

Whipflare came down as promised, resetting the board, but Cheung reloaded with a Blade Splicer, which immediately fell, along with its pet Golem, to a Slagstorm.

Cheung let a Solemn Simulacrum resolve in order to flash in Restoration Angel and follow it up with a Delver of Secrets, hoping to get in enough flying damage quickly enough to make Juza's late game unimportant.

Yet another Probe revealed a saucy hand for Juza, now with two more lands, including a Cavern of Souls, and the two Titans. One of them would be resolving the next turn. 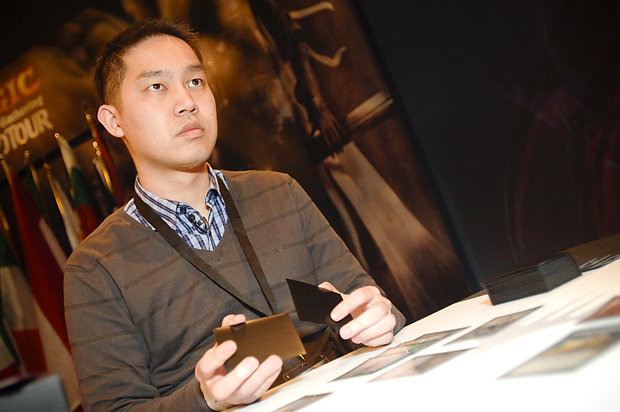 Justin Cheung's Australian squad badly needed him to win against Martin Juza in Round 6.

Predictably, Cavern of Souls named Giant, but Juza paused before choosing which six-drop to sling at his opponent. Cheung could still Vapor Snag either one, so he wanted it to have the most impact possible.

He choose Inferno Titan, but shot Cheung instead of the Delver of Secrets.

"I'm pretty sure you have the second Angel," he said.

Instead, it was Vapor Snag that sent the jolly red Giant back to Juza's hand. Juza's read was off.

Cheung simply attacked again and passed with all of his mana, including a Moorland Haunt, available. At this point, Cheung stood at 11 life while Juza was on 14, thanks in part to some Glimmerpost action.

Now with another turn to resolve a Titan, Juza paused again before opting for Inferno Titan once more, still choosing to shoot Cheung with all 3 points of damage.

Snapcaster Mage on Vapor Snag once again undid the Titan, but another Glimmerpost gave Juza some more breathing room.

Delver of Secrets flipped, revealing a very sorry Mana Leak as what was now Cheung's last card in hand, but he continued to attack, denting Juza's life bit by bit.

The little Inferno Titan that could resolved for a third time, this time killing Delver of Secrets and a Spirit token, and Juza added to his defenses with an Inkmoth Nexus, which sacrificed itself to the Restoration Angel on the next turn. Juza fell to just 3 life, facing a Moorland Haunt and a pair of fliers.

But it wasn't to be for the Australian. Slagstorm cleared the board of all creatures and gave Juza even more breathing room, and Huntmaster of the Fells practically sealed it, bumping Juza to 5 life.

When the top of his deck failed him, Cheung packed it in to Juza's lethal brigade.

"I can't even keep a bad hand, because of Gitaxian Probe everyone would know," Juza said as he and Cheung both sent back their initial hands.

"It's the Gitaxian Probe test. If you would be embarrassed, mulligan," Cheung sagely offered back.

Juza then told Cheung a story about playtesting for Pro Tour Dark Ascension, where Brad Nelson conceded to a first-turn Gitaxian Probe so as not to reveal a bad keep.

Back at the World Magic Cup, both players mulled to six, while Cheung Pondered to set himself up for a Mana Leak on Juza's Rampant Growth.

Cheung used that opportunity to resolve a Geist of Saint Traft on turn three and attacked with a Runechanter's Pike attached on turn four, all while Juza ramped before playing Huntmaster of the Fells.

The Wolf token leapt in front of the first-striking Geist of Saint Traft on the following attack, and Cheung used a Snapcaster Mage to Ponder a second time, leaving Island, Geist of Saint Traft, and Delver of Secrets on top of his library in that order. The land was likely to help him resolve a Tamiyo, the Moon Sage the following turn, should the opportunity present itself.

As planned, Tamiyo came down and moved the Ravager of the Fells out of the way to enable an attack for 7, which would have put Juza to all the way down to just 3 life.

Then came a big turn for Cheung that turned the course of the game. Just not as he intended. 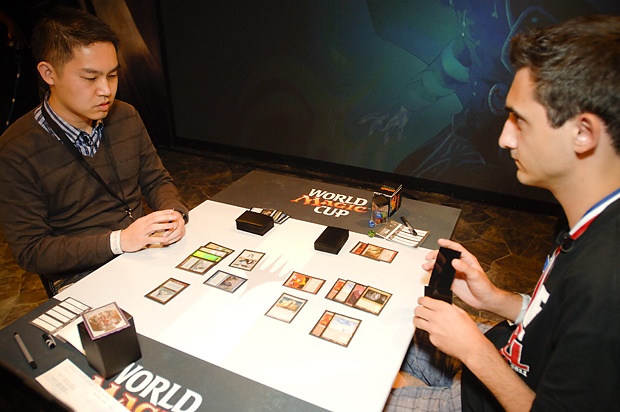 The outcome of this match turned about as many times as Ravager of the Fells did.

Cheung cast Phantasmal Image, copying the Ravager of the Fells (which does not trigger anything) and followed up with a Geist of Saint Traft. The two spells allowed Juza to flip the Ravager into a Huntmaster of the Fells, and tapping out meant Juza could simply pass to flip the Huntmaster back into a Ravager, killing the Image and redirecting 2 damage to Tamiyo.

All told, Cheung spent a card (the Image) to let Juza do the Huntmaster dance.

Still, the Australian plugged on. Another Ponder left cards on top, and Gitaxian Probe revealed Juza's stacked hand, with a Primeval Titan and Inferno Titan. If only Tamiyo would let Juza untap a 6th land...

Cheung then played and equipped Runechanter's Pike to his Geist, choosing to leave it back on defense. When a Geist of Saint Traft is your defensive option, you might be in trouble.

Tamiyo didn't let the land untap, but Juza's deck was forthcoming (even as Ravager flipped back to Huntmaster once again) and delivered a Rootbound Crag, enabling Primeval Titan for Glimmerpost and Kessig Wolf Run.

Juza looked to be firmly in the driver's seat. Inferno Titan killed Delver of Secrets and enabled Tamiyo's death at the hands of Huntmaster and a Wolf token. Juza was forced to chump block a giant Geist of Saint Traft with Inferno Titan, thanks to Runechanter's Pike, but it wasn't near enough.

Kessig Wolf Run was more than lethal, and once Juza decided to go for it despite an unknown card in Cheung's hand, it was purely math at that point.

And, indeed, Cheung had nothing.

4 Solemn Simulacrum 4 Huntmaster of the Fells