players entered this round at 4-2. A win would guarantee them advancement to day two, while a loss would put them in a "win or sleep late tomorrow" situation next round.

Berkowitz took a mulligan. His Talisman was Oxidized, and he protested his disgust loudly, missing his third land drop on the following turn. Ostrovich made a Tel-Jilal's Chosen, and when Berkowitz played another Talisman, Ostrovich had a second Oxidize. Berkowitz was stuck at two lands, and a pair of Molder Slugs later he conceded. None too happy about either his draw or Ostrovich's, he sarcastically talked about what a fair, good game they had played as he shuffled up for Game 2.

Berkowitz mulliganed down to six. Ostrovich's Chosen died to Electrostatic Bolt, and Berkowitz summoned Solemn Simulacrum. Ostrovich didn't have much to do, simply playing his fourth forest and saying go. Berkowitz put more pressure on the board with Arc-Slogger, and Ostrovich brought out Molder Slug. Berkowitz sacrificed the Simulacrum, and the Slogger got through for damage. He played another Simulacrum, and ended his turn.

Berkowitz- "If you beat me with something like Savage Beating, I swear I'm coming across this table."

Ostrovich summoned Duplicant, and in response Berkowitz shot Ostrovich twice with the Slogger before it became imprinted. The Simulacrum and Duplicant were sacrificed to the Slug in turn, and Berkowitz cast Grab the Reins with entwine to throw the Slug at Ostrovich, bringing him down to six. Ostrovich summoned Plated Slagwurm, and Berkowitz had Oblivion Stone in hand to deal with it, but was one mana short of being able to play and activate it. He played two Talismans and said go, tapping on his deck and bluffing by acting frustrated as he speculated out loud about what outs he had. The Slagwurm attack brought him to eight, he untapped, and played the Stone. It handled the threat, and Ostrovich came back with Fangren Firstborn. Berkowitz tried to kill it on end step with a Bolt, but Predator's Strike kept it alive. Another Bolt got the job done, and Berkowitz played a Vulshok War Boar that was eliminated by Duplicant.

Berkowitz- "Jesus, I shouldn't have even played that."

He had Shrapnel Blast with Ostrovich at six, and didn't want to be forced to use it on a creature. Berkowitz drew another Boar off the top, and Ostrovich attacked with his Duplicant and a Nexus. The decision was now whether to kill Ostrovich's Duplicant with Shrapnel Blast, or block and trade with the Boar. He decided to burn the Duplicant, hoping that Ostrovich wouldn't have an answer to the 5/5. Ostrovich did play Copper Myr, but had nothing else. The Boar attacked to bring Ostrovich down to one, and the counterattack brought Berkowitz to four. Facing few options, Ostrovich played Viridian Shaman to provide a chump blocker, killing the Myr. Berkowitz declared that he knew Ostrovich had Predator's Strike since he would have just chumped with the Myr instead, and played a Simulacrum. Berkowitz's hunch was wrong, as Ostrovich just played another Nexus and said go. They both blocked Berkowitz's creatures, and Arc-Slogger came out to finally deal the last damage. 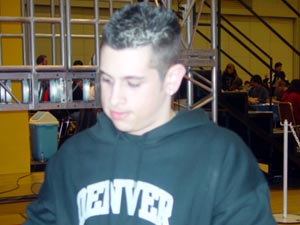 For the third game in a row, Berkowitz mulliganed his opening hand. He played a Talisman and asked "No Viridian Shaman", but that's exactly what Ostrovich had. Electrostatic Bolt killed it, and Ostrovich summoned Viridian Zealot. Berkowitz played a Simulacrum, and Ostrovch made a Fangren Firstborn. The Simulacrum got through for two damage, and Berkowitz played Oblivion Stone. Ostrovich's team counterattacked, and the Zealot destroyed the Stone. Berkowitz tried to kill the Firstborn with Fireball, but Ostrovich had Predator's Strike to make the save. It attacked again and grew to 6/4, and was chump blocked by the Simulacrum. Ostrovich added a Chosen to his side, and Berkowitz had the perfect answer for both creatures in Grab the Reins, but was one mana short of being able to entwine it. Instead, he had to settle for casting it before attackers were declared to slow down Ostrovich's offense for a turn. He didn't find an answer, and conceded.