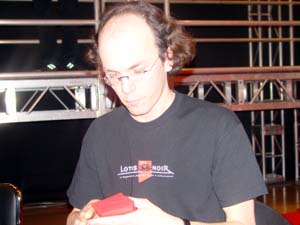 was all evil genius action this round as the mad Frenchman Nicolas Labarre squared off against Dave Humpherys's goatee-wearing twin. It was affinity on both sides of the table, but the build specifics were different. Labarre was in high spirits, whistling a jaunty tune while he shuffled up. Humpherys remained stoic.

All Humpherys's eggs were in that basket. He left the Ravager at home and passed it back. Labarre slowly drew his top card. He peeked at it, flicked through his hand, and then conceded.

"All I needed to draw was a non-land. Literally every other card in my deck won me that game." - Nicolas Labarre

Labarre sent back his first hand. He kept his next six, opening with Skullclamp. Humpherys made a Pyrite Spellbomb. Labarre started his meager offense with Arcbound Stinger. Humphers made a Disciple of the Vault and passed it back. Labarre brought out the Ravager and hit for one.

Unfortunately for him, Humpherys had a second Disciple, complicating his plans significantly. Labarre made an Arcbound Worker and ate it to beef up his Stinger and draw two cards. He hit for two and then Shattered one of Humpherys's Great Furnaces on his upkeep. Humpherys only play was a Darksteel Citadel.

Labarre Clamped his Stinger and swung in for three, then ate it for two cards and more counters on his Ravager. Then he put the Clamp on his Ravager and passed the turn. Humpherys decided it was time to go for it, and busted out Furnace Dragon. He lost everything but his Disciple, and Labarre was left with Blinkmoth Nexus and Glimmervoid, which he saved by turning on the Nexus.

Humpherys started hitting. Labarre had a Disciple of his own to trade with Hupmherys's, but he needed an answer to the 5/5 flier that was having his life total for lunch. Humpherys soon had him at three, but he rallied behind defenses of Pyrite Spellbomb, Myr Enforcer, and most importantly, Arcbound Stinger. The Stinger acted as speedbump.

Labarre hit back with his now 5/5 Enforcer and dropped another Pyrite Spellbomb. He had Blinkmoth Nexus ready to dive in front of the Dragon. Humpherys was forced to play an Arcbound Ravager and stay home. One Spellbomb cleared it out of the way. Labarre untapped and played a mighty Disciple of the Vault before swinging in. The Enforcer traded with the Dragon and Humpherys took two. All he had left in the tank was a lowly Arcbound Worker. That meant the game belonged to Labarre.

The players had just twelve minutes for the decisive game. Humpherys opened with Great Furnace and hit Labarre's Arcbound Worker with Electrostatic Bolt. He went for the throat with a Shatter on Labarre's only land. Labarre replaced it with Vault of Whispers and a Disciple. Humpherys dropped a Talisman and another land destruction Shatter. Unfortunately for him Labarre was long on lands. He played another Vault and a Skullclamp. Pyrite Spellbomb made sure Labarre wouldn't get any cards out of his Disciple.

Labarre finally got to keep a second land on the table while Humpherys made a Skullclamp of his own. Labarre made another Disciple, and Humpherys another Clamp. Labarre finally brought the noise, summoning a Myr Enforcer. His joy was short-lived. Before he could Clamp a Blinkmoth Nexus for cards, Humpherys Shattered his Clamp, then Bolted his Enforcer. 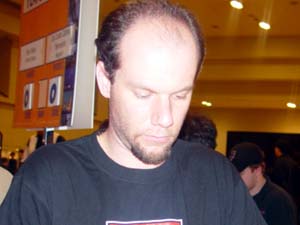 Then Humpherys drew an Arcbound Worker and started to draw cards. The first order of business was to off the Disciple, which he did with a Pyrite Spellbomb. Then came an Arcbound Ravager. All Labarre had was a Worker and Ravager. He took three from a Clamped Ravager. Humpherys played another and then Clamped the first again to draw four. He played a Myr Retriever and passed it back. Labarre drew a spicy one: Disciple of the Vault. The last card in his hand was an artifact land. His two 1/1's charged. Humpherys could block both, but he would lose an artifact in the process. Labarre had seven in play. He was at eight. Humpherys looked at it from every angle, but the numbers didn't change.