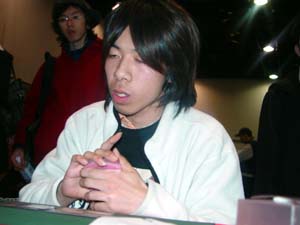 of these players came into this round with 4-2 records, making a win critical.

Shiki didn't have a turn three play, and all Yamashita could muster was Nim Replica. Shiki summoned Neurok Prodigy on turn four, and Yamashita played Tel-Jilad Outrider. Tangle Golem would have given Shiki a huge threat, but it died to Deconstruct and Yamashita played Wizard Replica. Not out of gas, Shiki brought out Fangren Firstborn. This was enough to convince Yamashita to stay back, even with a Fireshrieker. He put it on his Replica and said go, holding back to make sure the Firstborn never got bigger. Rustpore Ram dealt with the Shrieker, and Yamashita went to the air with Emissary of Despair. Shiki tapped out for Trolls of Tel-Jilad, which combined with the Firstborn to create a huge problem that would be hard to contain. Yamashita attacked with the Emissary, and brought out Nim Shambler. He only had one artifact out, so it was less than impressive. Likewise, Shiki's only artifact was the Ram, so the Emissary wasn't too threatening. On top of that, Shiki had a Blinkmoth Nexus, and activated it the next time the Emissary attacked. Before blockers, Yamashita targeted it with Irradiate, so it pumped itself in order to survive. Already in a bad situation, Yamashita conceded when Shiki played Darksteel Gargoyle.

Shiki brought out the equipment early, and had Bonesplitter and Mask of Memory in play by turn two. Yamashita played Fireshrieker, and Shiki had no creature to put all that hardware on. Yamashita had no such problem, playing a Tangle Golem. Shiki summoned Somber Hoverguard on turn four, but with the Fireshrieker out he wouldn't have much room to work with. It went on the Tangle Golem, dealing ten damage. Yamashita added a Nim Replica to his side, and Shiki switched to Plan B. He kept his creatures back, and brought out Molder Slug. The Replica died, and the Hoverguard chump blocked the Golem. Yamashita summoned Karstoderm, and Shiki began to stabilize a bit with Neurok Prodigy and Iron Myr. Molder Slug caused Yamashita to sacrifice the Fireshrieker, making the Golem far less intimidating. Shiki chose to sacrifice the Mask instead of the Myr, allowing him to bring out Trolls of Tel-Jilad. 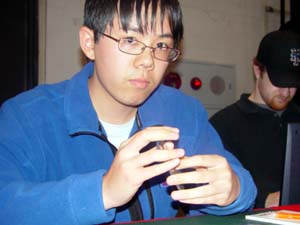 Yamashita played Moriok Scavenger, which brought back a Nim Replica that could at least provide a threat to the Prodigy. Meanwhile, the green fat kept attacking, and the Trolls made combat a bad proposition. The only out Yamashita had was the Barter in Blood in his hand, but for it to be effective Shiki would need to have only two creatures in play- as long as the Trolls were around with the current board position, it would be impossible to win. It didn't happen, and Shiki took the match.