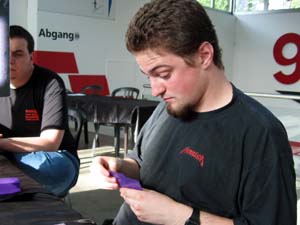 Moro is an Italian legend. He had a Worlds Top 8 in the last millenium and then took forever to score another big time Top 8. Accross the table... a Polish player called Adam Urban. The name sounds oddly familiar, doesn't it? From a few American events coverages perhaps? Since he's studying in Warsaw and doing the Grand Prix circuit in Europe, you might come accross the name a few more times.

He took a break to walk Troll Astetic into Condescend and played a second Nexus as his fourth land. Eternal Witness gave him the Troll back. Meanwhile Urban was busy using Darksteel Pendant to have some control over his draws.

The second time around Troll Astetic stuck. The Polish took the time to play Thirst for Knowledge and Serum Visions. Still, he gave the turn back to the Italian with no play other than Darksteel Ingot.

The Green team struck again and Raffaelle tried to up the ante with Fangren Firstborn. Condescend put an end to his "Timmy" dreams.

Working his life points like a marathon runner Adam Urban played Solemn Simulacrum, the ever-present Jens Thoren, and March of the Machines.His Ingot was now a fierce 3/3 that could block anyone and survive to tell all about it.

Again, the Polish sat behind the Ingot. Lo Moro showed him another Eternal Witness. Back came Creeping Mold a Blinkmoth Nexus brought Urban down to six.

Lo Moro thought about it... and used the Mold. Adam's last card in hand was Condescend. The three Nexus on the table dropped Adam Urban to five. Despite having the ground somewhat clogged up with Darksteel Ingot he had to find a way to stop the flying armada.

Lo Moro sent one Nexus, two Witness and Troll Astetic into the Red Zone. Adam Urban thought about it... and scooped.

Raffaele: "I just like to shuffle. I love shuffling."

Adam: "he likes to shuffle and he does it SO well."

That a mulligan announcement in case you were wondering. He kept his second hand ahd came out with a vengeance, stopping Viridian Zealot and Troll Astetic on turn two and three.

On the fourth he played Solemn Simulacrum, giving Raffaele the go ahead to cast something big on turn four. The Italian obliged with Frangren Firstborn. Viridian Shaman took Thoren out of the way and the Firstborn started stomping around the table.

Urban used Thirst for Knowledge to find an answer. And he did: Barter in Blood to clean the table. Lo Moro sighed noisily. Still, he couldn't really complain. His next play was Eternal Witness "regrowing" Viridian Zealot, after much deliberation.

He didn't draw March of the Machines but he did draw Solemn Simulacrum. Lo Moro struck back with Blinkmoth Nexus with three creatures stuck in his hand. Then he drew his third land... another Nexus. Although it did help it sure didn't help him play Troll Astetic or Eternal Witness.

Finally he found a castable spell: Tel-Jilad Chosen. But Urban shook his finger. Condescend stopped that nonsense. Another Thoren came into play before Raffaele found his second Forest.

He used it to play Karstoderm. Urban frowned. Lo Moro tried to even the score with Nexus but Urban had Echoing Decay. A swing and a Barter in Blood later the table was clean again and Adam Urban was hitting his deck demaning March of the Machines.

He didn't get it but he did get Death Cloud. With Lo Moro at three it was more than enough.

The Zealot started swinging but when Lo Moro tried a turn three Firstborn Urban shook his head (a.k.a. Condescend). The Italian took his own sweet time to think about his fourth turn and eventaully settled on playing Tel-Jilad Chosen and attacking with Zealot and Nexus.

Unzafed, the Polish used Thirst of Knowledge to set up his Barter in Blood. Lo Moro was back square one, well almost. He sacrificed the Nexus to keep the Chosen and played Troll Astetic while Urban dropped Thoren.

Viridian Shaman took out the Simulacrum and Adarm Urban fell to a mere six with nothing but lands on the table. He dropped another Solemn Simulacrum.

Adam: "Not another Shaman!"

Lo Moro put on his poker face and sent the crew in. Echoing Decay ate the Chosen and Thoren chumped Troll Astetic. Adam dropped Darksteel Ingot, Solemn Simulacrum and winced when Lo Moro unleashed his wrath on his deck.

He didn't get it. His Shaman died and Thoren took one for the team. Finally the Polish found Death Cloud. He played it for one, getting Lo Moro's lone Troll and his card in hand. 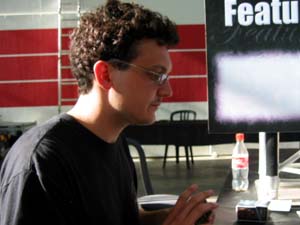 Afterwards he dropped March of the Machines and attacked with the Ingot. One turn too late, Lo Moro found Creeping Mold. Adam smiled and buried his March before played Thirst for Knowledge with seven minutes on the clock.

Lo Moro topdecked Karstoderm but Adam had just found Condescend. That gave him March of the Machines. With two Ingots he had a pretty decent clock. Two land draws later for the Italian the round was over.