Round 7: Adolfo Hernandez vs. Noah Boeken 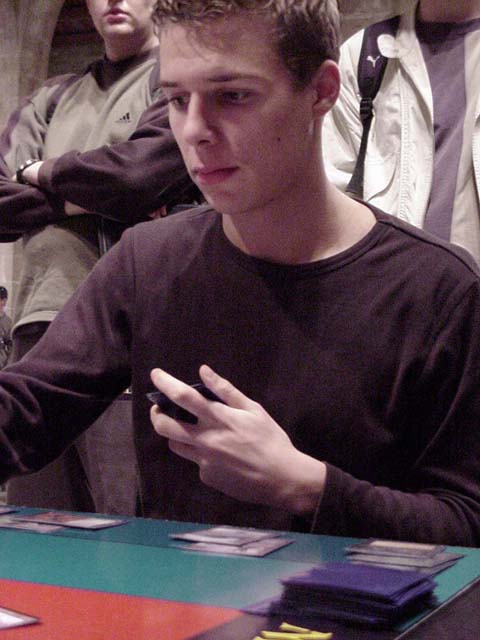 These two are probably a point away from the second day. With 701 players and eight rounds, 6-1-1 should be enough, while 6-2 might not make it. Coming all the way to 6-0 and then losing the last two rounds would be terrible but it might happen.

So far their day has been nothing but joy and a win here could mark the start of a run for the Top 8 tomorrow. One of them will walk away knowing he is in the second day.

Adolfo opened up with a Wild Mongrel and Krosan Archer while Noah started with a Millikin followed by a Dirty Wererat. When he played Aven Windreader Hernandez whistled and dropped his own copy on the following turn.

Boeken used a Diabolic Tutor to fetch out a game breaker choosing between Stalking Bloodsucker, Gravedigger and Morbid Hunger. After some deliberation he settled on the Hunger.

He countered Puppeteer, untapped and Hungered away the Windreader. Although the Krosan Archer could hold back Noah's Windreader the Dirty Wererat was now in full power and was more than a match for the Mongrel when it came to speed.

Adolfo had enough fight in him to counter the Flashbacked Morbid Hunger but there was little he could do to turn around the creature war. If he had somehow found the second Swamp to power his freshly drawn Morbid Hunger things might have been different.

This time the shoe was on the other foot. The Spanish player started out with a turn three Patchwork Gnomes followed by a turn four Dirty Wererat while Noah was forced to discard when he was locked at two lands (although he used the discard to make his Crippling Fatigue playable on the next turn).

Despite losing his Gnomes Hernandez had enough speed in him yet. He played a Mongrel and bounced a Cabal Torturer out of the way for another swing before playing Aven Windreader.

Boeken tried to fight back with a Zombify on his Grotesque Hybrid. Hernandez had no way around that so he tried to go through it: he attacked with the Mongrel and the Windreader.

Boeken traded the Hybrid for two cards for the Mongrel and a cycled Refresh dropping to six life. He needed an answer but the best he could muster on the next turn was a Dirty Wererat. Adolfo had a Repel to solve that dropping the last bloody elbow on a game Boeken never had a chance. 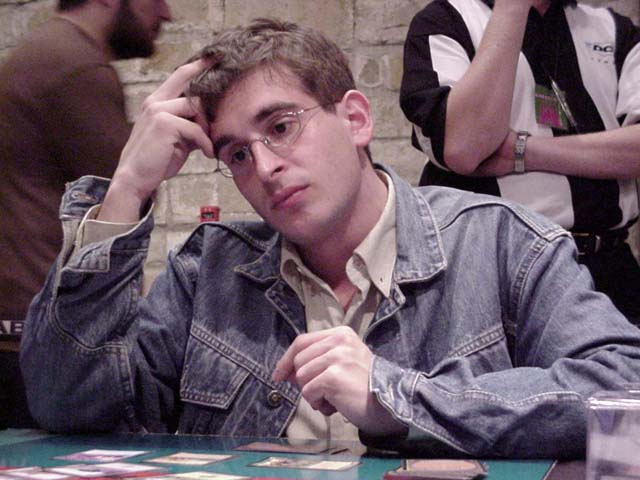 Hernandez kept a very risky and for the third game with only Islands and his deck decided not to help him out. By the time he found his fourth land, a Swamp Noah already had a Millikin, Looter and Windreader.

The Dirty Wererat and Crypt Creeper were not quite enough to catch up right away and when Noah Discarded a Diabolic Tutor to the Looter it was obvious he had a handful of menaces. The first one to come out was a Nantuko Cultivator (discarding two lands).

Still the Spanish players refused to lose his good humour, whistling as he Repelled the Cultivator away. Boeken shrugged it of and played a Aven Fisher further stretching his control over the skies.

With the Spanish now at nine Boeken played Aquamoeba and tried to Zombify a Grotesque Hybrid but Adolfo didn't forget about his Creeper and took the Hybrid out of the game.

The Dutch air force brought Hernandez down to four and Boeken played Stalking Bloodsucker to make sure there were no last minute surprises. Hernandez brought him down to six with a Mongrel powered swing and played Gloomdrifter to kill most of the table away.

All he had now was Gloomdrifter and Mongrel and Noah was down to Bloodsucker and Windreader. It was too little too late, the flying menace took him out in one swing.