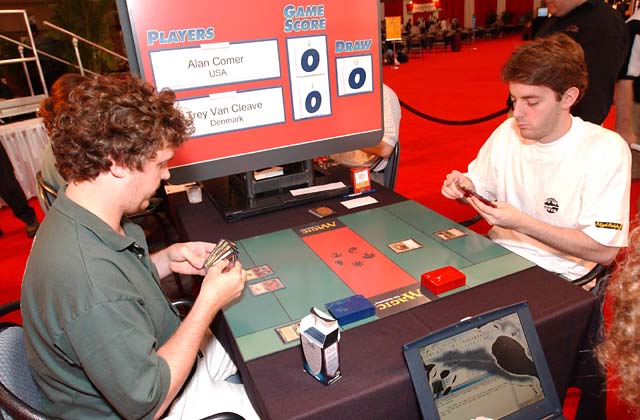 Alan Comer was none too excited at his chances in this round. His five-color green deck had been sabotaged by the player to his right. He missed out on a lot of Elves, and as a result had to run noncreature mana fixers. Trey Van Cleave thought that things weren't as bad as Comer suspected, but it's harder to judge when you've got your own draft to worry about.

Comer spent his first few turns developing his mana base with Lay of the Land and Primal Growth. Van Cleave soon had the boots to him, with Stormscape Familiar and Silver Drake swinging into an empty board. Comer went for Captain's Maneuver to take out the Drake, but Van Cleave was ready with Dromar's Charm. Unfortunately for him, his three lands were all he had to work with.

Comer turned up the heat with a doubly-kicked Rakavolver. Van Cleave triple-checked it. It was indeed a 5/5 flying Spirit Linked monstrosity. He added a Reef Shaman and Dega Disciple to his board. It was a lucky thing, too, since Comer came over the top with a kicked Benalish Emissary to take down his swamp. The 'Volver swung for five.

Van Cleave found a second island and played it, passing the turn back. Comer swung again, but this time his beats were stopped by a Rushing River. Van Cleave further clouded the issue, with his Reef Shaman turning Comer's island into a forest. Prevented from dropping his game-winning bomb, Comer had to content himself with a Kavu Climber. Van Cleave attacked in the air and again muddied Comer's mana.

Seeing that he was behind in the race, Comer replayed his Rakavolver with just the white kicker, making a mere 4/4. He attacked with his Climber and turned it over to Van Cleave. He in turn sent for four, but still frustrated by three lands, had no further play. 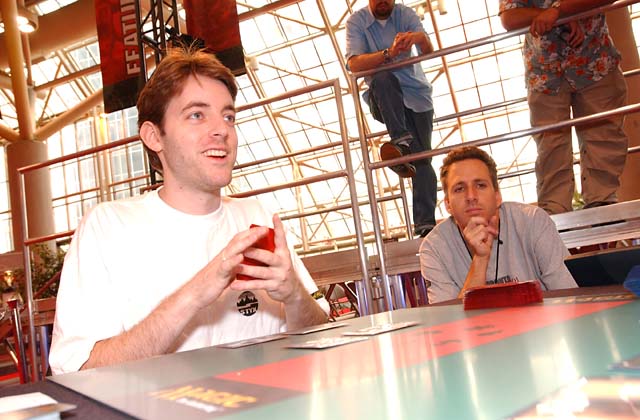 Comer sent both his giants into combat, and Van Cleave winced at the beating he was taking. He considered chumping with one of his Dega Disciples, or activating one of them via his Reef Shaman, but took it like a man. He was rewarded when Comer played Wayfaring Giant, and he was able to stop it with a Shaman-powered Dromar's Charm.

Still at three lands, Van Cleave was holding on. He dropped another Silver Drake, gating a Disciple. Comer's beasts attacked again, and the life totals stood eight to three in Comer's favor. At this point, Head Judge Mike Donais stopped the match. A warning for slow play that Van Cleave had received earlier was being upgraded into a Game Loss due to multiple infractions.

Van Cleave was understandably upset, especially considering the bounce spell in his hand would have given him the game on the following turn.

Van Cleave's Reef Shaman was no advantage against Comer's slow start. Fortunately, he also had a Silver Drake clocking him quite well. Comer played two Primal Growths, and kicked up a Pincer Spider on the fifth turn. Van Cleave sent his Drake into it, and played Night after blocking. Comer responded with Explosive Growth, protecting his investment.

However, he had no further play, holding only land and an uncastable Ebony Treefolk. Van Cleave's board was swarming with dudes, having added a second Drake and a Sea Snidd. Now he was able to break through with one, his Dega Disciple protecting the other.

Two Gerrard's Verdicts emptied Comer's hand, but he'd added a Stone Kavu to his board, and drawn into a second Pincer Spider. Van Cleave sent both Drakes, the Snidd, and a Metathran Zombie. He did extra damage with his Dega Disciple, and rescued his team with Pollen Remedy. The assault left Comer at one, and he scooped after seeing his next draw. 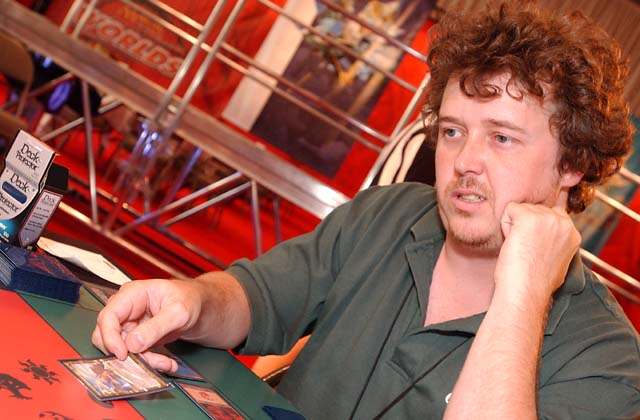 Van Cleave mulliganed to open Game 3. Comer came off the starting blocks with a Quirion Sentinel, and then a Pincer Spider. Van Cleave's six-card hand was good to him, as he had a Metathran Zombie with all three colors of mana, perfect for stopping the beatdown.

He had a Dromar's Charm for Comer's kicked Benalish Emissary, and dropped Zombie Boa. Comer came back with a Magnigoth Treefolk that could Plainswalk over Van Cleave. Van Cleave Verdicted away a Rakavolver and Cromat, and used the Boa's ability to waltz past Comer's blockers. Comer's Treefolk answered in kind. He played a Quirion Elves, ramping up to kicking his second Spider.

Van Cleave swung and handed it back. Comer attacked with both Spiders and the Treefolk. Van Cleave blocked and regenerated, saving himself five damage with Rushing River. Comer played out Tundra Kavu and Standard Bearer, and chumped the Boa to stay in the race. Van Cleave finally found more defense from a kicked Prison Barricade, and Comer decided to play the long game with Magnigoth Treefolk, recasting it and passing the play back.

At this point, play was again stopped, and Van Cleave received his second warning of the match for slow play. Van Cleave was awarded a match loss, and Comer's match score was converted to 2-0. The judges stressed that though Van Cleave's infractions were unintentional, one of the requirements of pro level play is the ability to make game decisions in a reasonable amount of time, something they felt Van Cleave was not doing.