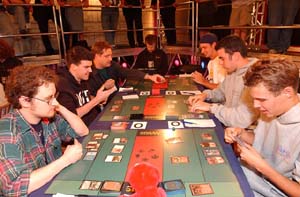 While shuffling, there was some talk about Fuller's reputation for trash talking. Valkyser commented "You didn't wash your hair" to Fuller, which seemed to confuse a few people in the area. Never at a loss for words, Mark Rosewater mentioned that "In Germany, that's probably funny".

Benafel started off his match strong against Mello, using Prohibit to counter Razorfin Hunter, and Exclude to counter Slingshot Goblin on the following turn. Benafel built up his air force with Razorfoot Griffin and Tower Drake, putting Mello on a clock of four damage. Meanwhile, Fuller's red/green beatdown squad of Quirion Sentinel and Raging Kavu was getting past Valkyser's Quirion Trailblazer with the help of Thunderscape Apprentice. Fuller joked around a bit and asked Valkyser if he had Simoon or Breath of Darigaaz. Indeed, Valkyser did have Breath, and wiped the board clean of Fuller's three creatures. A Questing Phelddagrif showed up on Valkyser's side of the table a few turns later, and Fuller's reaction was a word that cannot be printed on this wholesome family oriented website. The hippo went all the way, putting Valkyser up a win.

On the other side of the table, Kroger had the attack zone locked down thanks to two tappers, Benalish Heralds, Benalish Knight and Standard Bearer. Benafel had won his first game, and the score was even. Valkyser and Fuller shuffled for game two, and continued their friendly trash talking. Valkyser proposed "How about we lose today and win tomorrow?" Fuller responded by asking "What? You lose today and we win tomorrow? Okay!" 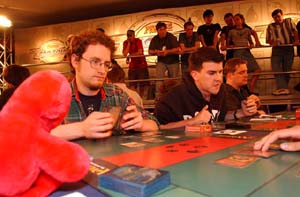 Kroger and Boeken were still at a stalemate, as Obsidian Acolyte and Standard Bearer along with a full ground army kept Boeken's red/black deck in a less than aggressive position. However, Boeken did have out Smoldering Tar, which was dealing a point of damage a turn. Benafel started off his second game strong with Tower Drake and Tidal Visionary, but Mello made the situation much less optimal with Razorfin Hunter. It pinged away Benafel's troops, while Mello built an army of his own. This helped Mello to win the second game, bringing his match to a deciding third. Valkyser used Breath to kill off two of Fuller's creatures in their second game, and summoned the Phelddagrif. This left Valkyser with only a mountain untapped, but Fuller did not have a removal spell available to capitalize on the situation. Fuller looked towards Boeken on the other side of the table, and asked his teammate "How are you doing over there?", implying that he was about to lose, and that Boeken had to win his match. Fuller used Tangle in an attempt to stop the bleeding, but it didn't help matters. He lost the game, putting his team down a match.

Boeken and Kroger were still in their first game, and Boeken sacrificed his Smoldering Tar, targeting the Standard Bearer. Kroger responded by using Obsidian Acolyte to give his Bearer protection from black. This gave Boeken the opportunity to go for it all with Death Grasp, since it now could not target the Bearer. However, Kroger had Pollen Remedy to save himself. With the board now heavily in his favor and no Smoldering Tar to worry about, Kroger won the first game. 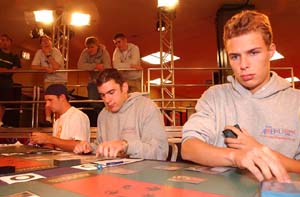 Benafel had his flying beatdown at full force in his third game, with Razorfoot Griffin and Hunting Drake flying through the air, and Shoreline Raider holding down the ground. Mello seemed to be beaten, but used Illuminate with red kicker to kill off Benafel's Griffin. This brought Benafel down to a fragile two life points, and Mello had Plague Spitter out. It dealt a point on Mello's next upkeep, and attacked for the win, since it would deal the last point of damage needed as it hit the graveyard. This gave Lyskavermaden the win

Kroger and Boeken still had a match to finish up, and were in their second game. Once again, Kroger had the ground locked up thanks to two Benalish Heralds and two Riptide Crabs. This helped give Kroger the match win, and gave Lyskavermaden a 3-0 sweep.