Round 7: Andrew Gordon vs Shun Jiang

Sitting pretty on a 6-0 record Jiang has already made day two but hes not looking to concede just yet. A win here will put him one away from a perfect day one and three wins away from getting himself a top 8 birth. Gordon is no slouch either coming into the round undefeated on a 5-0-1 record a win will push him into day two while a loss will have him with his back to the wall in the next game.

Jiang begins the round with a mulligan, explaining that there's no way that he's going to keep 6 land and a Myr and everyone around the table agrees. Gordon takes a long time deciding over his two blue spell, 4 Forest and a Duplicant hand before deciding to keep.

A turn two Myr and a turn three Sword of Kaldra are the plays that came from Jiangs mulligan hand. Gordon plays out a turn three Loxodon Warhammer and then a turn 4 Frogmite. The sword bearing Myr comes into the red zone again, knocking Gordon down to a tiny 8 life. Jiang thinks for a second and Deconstructs the Frogmite, but has nothing to do, burning himself for 3. Still unable to draw a blue land, or infact any land, Gordon packs away his hand in disgust.

During shuffling for game two both gamers discussed the probabilities of Gordon drawing a land over the course of the game along with the chance of him being paired up and against Jiang. 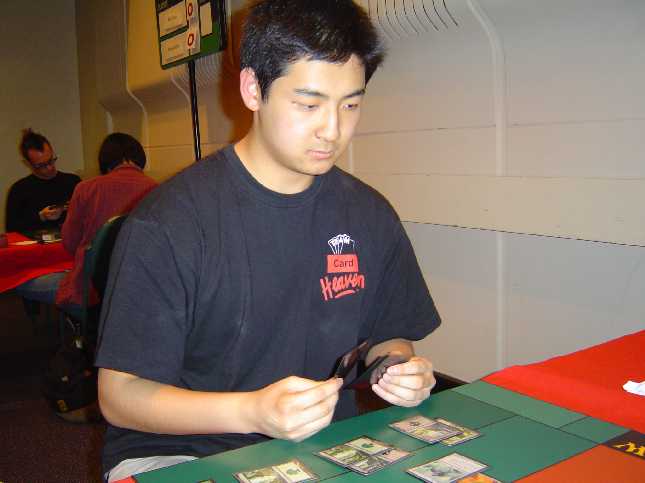 Jiang takes another mulligan in game two and starts play on turn three with a Journey of Discovery. After some thought Serum Tank is Gordon's answer and he passes the turn to Jiang. Leaden Myr comes down for Jiang giving Serum Tank a counter and Gordon is forced to activate it in his main phase as he searches for a land. Unfortunately for him he doesn't find anything and is forced to enter his discard phase, pitching a Battlegrowth. Jiang brings down Oblivion Stone but Gordon has the only out in his deck to remove it in his hand, Viridian Shaman.

Jiang tries to keep up the pressure with a Wurmskin Forger putting one counter on itself and two on the Myr. Gordon plays a Myr of his own which could provide relief to the mana screw that he is currently facing, if of course it lives to see his next turn. Sword of Kaldra comes right off the top of Jiangs deck and he bangs it into play. After what seems like an eternity Gordon finally gets a land off the top, allowing him to summon a Cobalt Golem and then a Frogmite thanks to its affinity for artifacts. The Sword of Kaldra gets equipped to the and it slams in dealing damage to Gordon. After combat Jiang shifts the sword back onto the Myr and passes the turn. Gordon plays out a Myr Enforcer and when Jiang sends the Sworded Myr into the red zone again the Viridian Shaman jumps in front of it. With no other plays to make Jiang then passes the turn with 8 mana open.

Myr Enforcer attacks back dealing Jiang 4 damage and an island from Gordon after the attack phase is greeted by a cry of "So lucky" from Jiang. One Dozen Eyes brings 5 1/1s into play to act as a wall of fog against the Sworded Myr. Jiang summons a Hematite Golem and ends his turn. After drawing his card Gordon exclaims "Now that's lucky!" dropping down his Loxodon Warhammer, equipping it to his Myr Enforcer and attacking. 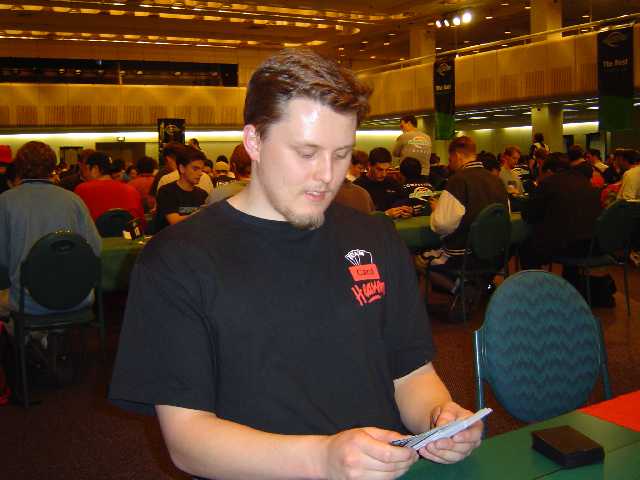 Gordon gets proceedings underway with a turn two Copper Myr and then follows it up by sending it into the Red zone and casting a Viridian Longbow. Jiang brings down a Yotian Soldier to stop the little Myr from applying anymore beats. A Myr Enforcer comes into play from Gordon's hand thanks to the affinity for artifacts. Stuck on three land Jiang plays a Deconstruct on the Enforcer and then uses the extra mana to play out Oblivion Stone.

Tel-Jilad Archers joins the team for Gordon and once again Jiang cant find a land, as Gordon drops down One Dozen Eyes making it a 5/5 monster. Duplicant locks down the freshly summoned Jiang Yotian Soldier. Escaping from mana screw Jiang plays out an Iron Myr and drops to one life during the next attack phase, allowing him to explode the Stone during Gordon's next turn. When the Stone is finally blown up during the attack phase Gordon drops a Tel-Jilad Chosen and a Myr and its more than enough to deal the final point of damage.