Round 7: Andrew Grain vs. Minga Wong 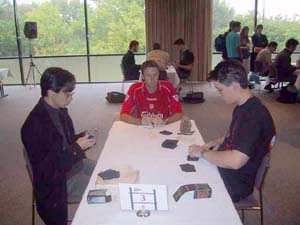 After an impressive showing at last years nationals making the top 8 playing a skies deck, Grain is looking to make the team this year playing a U/G/R madness deck. Wong is playing a deck that seems to have dropped out of the top decks of the format, B/R braids.

After winning the die roll Grain elected to play first and started strongly with a first turn bird and a second turn Spellbane Centaur. The bird bit the dust during Wong's second turn as it was the sacrificial lamb for a Chainer's Edict. Grain continued to apply presure dropping a Merfolk Looter, the heart of the madness engine, allowing cards to be drawn for free using the madness discard to play spells. Wong played back to back Phryexian Ragers but they were no match for a Flametongue Kavu assault, allowing Grain to further press home his advantage. To seal the match Grain played a Call of the Herd and sent in the full team for the final lethal damage.

Unfortunately for Wong he got off to a slow start playing a turn three Phryexian Rager which was no match for the turn two Wild Mongrel summoned by Grain. Using the discard effect of the Mongrel, Grain pushed through a point of extra damage and brought in an Arrogant Wurm using madness. Wong stabilised the board by dropping Shambling Swarm and the two players traded off creatures, with Grain re-establishing control with a Call of the Herd token. Wong was helpless as he failed to draw into any useful spells casting two rancid earths on Grains land. Two consecutive Nantuko Blightcutters sealed the game and the match for Grain as the Call token led his army to victory.