Round 7: Antoine Ruel vs. David Williams 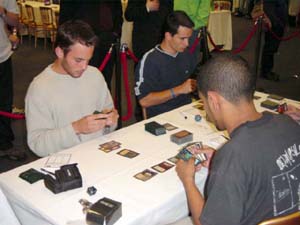 These two players are at the top of their games at the moment with both appearing in the Top 8 at the World Championships recently, before Williams was disqualified without prize. Ruel was playing a Red/Black deck featuring fast creatures, burn spells and disruption in the form of discard. Williams was playing a Black/Blue/White deck featuring a host of powerful spells including Vindicate, Yawgmoth's Agenda and Probe, amongst others.

Both players kept their opening hands and it wasn't long before they were both playing creatures. Ruel went first and started with a Nightscape Familiar, followed up by a Blazing Specter while Williams played two Lynx. After the players had traded hits for a few turns, Ruel upped the ante by played two Zombies. Williams replied by casting a Fact or Fiction revealing Recoil, Plains, Caves of Koilos, Probe and Coastal Tower. Williams took the pile containing Recoil along with Plains and Caves of Koilos. A Probe with Kicker from Williams got rid of two land from Ruel's hand.

The next turn saw Ruel attacking and knocking Williams to nine. Feeling the pressure, Williams recoiled the Nightscape Familiar and Vindicated the Blazing Specter, this however left him tapped out and Ruel used the opportunity to kill the two Spectral Lynx. Ruel then replayed the Nightscape Familiar which was killed by Williams in his next up keep to prevent Ruel replaying the Pyre Zombie he had just recurred. With only two mana available Ruel summoned a Shivan Zombie that was joined next turn by a Skizzik, the resulting attacked dropped Williams to two and he scooped when his draw provided no answers. 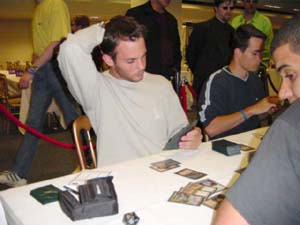 After a very quick and brutal first game that took all of ten minutes, this game stared at a more sedate pace. Williams going first was the first to act, Vindicating a swamp. Ruel replied with an Addle naming white, taking a Dromar's Charm over a Spectral Lynx or one of two Routs. The other card in Williams's hand was a Probe. Williams cast the Lynx next turn and Ruel replied with a Pyre Zombie, again the players started to trade attacks for a few turns until Williams tapped out to cast a kicked Probe and Ruel took the chance to kill the Lynx. Ruel discarded a Skizzik and Terminate to the Probe. Williams then continued to attack Ruel's mana base with a Recoil on a Swamp which netted a Void on the discard.

After countering a kicked Skizzik Williams assault on Ruel's land continued, this time with a Gerrard's Verdict which forced the discard of a land and another Skizzik. Ruel's answer was a good one however, with a Crypt Angel allowing him to get one of the Skizziks back from the graveyard. Another Fact or Fiction by Williams nets him another Recoil and he untapped and cast Rout killing the Crypt Angel. Williams now stepped into high gear and really took a hold of the game, first recoiling the Skizzik, then Routing as an instant the next turn to kill the Skizzik. Two Vindicates get rid of Ruel's sources of black mana leaving him with only three Mountains in play. Both players seem to be in top deck mode with an Addle by Ruel revealing that Williams had an all land hand. After his next draw however Williams ominously rearranged his graveyard and sure enough played a Yawgmoth's Agenda and things really looked bad for Ruel. A fact or Fiction from the graveyard provided Williams with two Desolation Angels and after a few turns maximising the abuse of the agenda with Charms, Verdicts and Vindicates, Williams taps out, putting twelve mana into his pool, playing one Desolation Angel and attempting to follow it with the next. Ruel however points out that the agenda is in play and Williams burns for five. Despite his miscalculation Williams quickly wraps up the game. 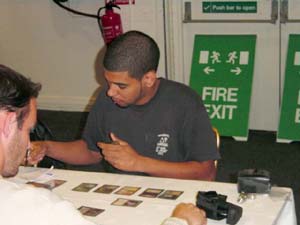 After mulliganing down to six, Ruel started the game and Addled Williams on turn two, which and took Gerrard's Verdict over Dromar's Charm. The rest of William's hand was a bit of a beating with Desolation Angel and Yawgmoth's Agenda and some land. Ruel was still lacking any red mana by his forth turn and thus when Williams cast Lobotomy he was rewarded with two Blazing Spectres, leaving Ruel with a Swamp and a Shivan Zombie in hand. Unlike his opponent, Williams had no mana problems and proceed to have answers for everything tried to do and another Lobotomy removed the Skizziks from Ruel's deck. All this and Agenda and Angel still to come. Oh Lordy.

A Crypt Angel from Ruel was answered with a Rout and next turn Ruel saw his first red source vindicated. Williams then played the agenda and in an almost exact repeat of the previous game made maximum use of the powerful enchantment to firmly establish control before he dropped the Angel with kicker to seal the game a few turns later.