Round 7: Battle of the Undefeateds

long and tiring battles, we come to this final round of Day One. Both teams have done well so far, the only two teams left who haven't suffered a loss. Yet they're both itching for something a little more: the right to be declared the undefeated team on this first day of Pro Tour-Charleston. 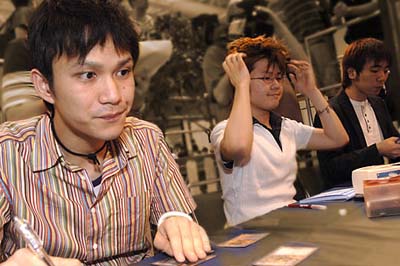 Ichirou, Shu, and Shuhei wanted to be the sole undefeated team.

Double SHU Desu is a Japanese team hailing from the Tokyo region. Their name, I'm told by Japanese reporter Keita Mori, means "We are two Shu's." Opposing their quest for flawless victory is one Slumpbusters, from Ohio, USA.

The tension, and the crowd, was thick with these two teams. Each player was happy to make Day Two, but still dearly wanted to be the champs of Day One.

The A seat was once again the matchup of the two bi-colored decks. In this case it was Ichirou's Rakdos build against Kendall's Orzhov creation. In the first game, Kendall came out remarkably well, playing a spell from turn two on. An Orzhov Guildmage and Dark Confidant took Seals of Fire, but the Belfry Spirit and Ghost Council of Orzhova were a little more resilient. Ichirou had a little burn and a Rakdos Augermage, but not much else. Things looked bad for Ichirou when his Augermage took a Mortify. Things looked dead for Ichirou when Belfry Spirit, Ghost Council, and the minions got a boost from Orzhov Pontiff. Ichirou could only stare at the lands in his hand as he packed it up.

Elsewhere on the table, seat C's Jon Swearingen's speedy red-white deck was making Shuhei's green-black-white control deck sweat. Frenzied Goblin, Veteran Armorer, and Skyknight Legionnaire kept crashing into Shuhei's life total. Shuhei would deal with each of them in turn, but their hits were adding up fast.

At five life Shuhei began to stabilize with a Debtors' Knell in play and a Loxodon Hierarch in the graveyard. Unfortunately for Shuhei, before he could turn recursionist, Jon calmly untapped and tossed out a Char and Scorched Rusalka.

The A and C players were gifted with very fast games, but the B side looked a bit more plodding. Shu Komuro was playing one of the talks of the tournament, a G/W/U/r deck designed by Itaru Ishida. Shu's deck was an aggro-control build, with Guildmages, Court Hussar, Supply//Demand, Remand, and Vitu-Ghazi, the City Tree. To make all these cards efficient, Shu was running a complement of Utopia Sprawl, a card most other teams were staying away from due to the prevalence of Rolling Spoil, Wrecking Ball, and even Wreak Havoc. Considering the record of Shu's deck, perhaps other teams should have taken a closer look.

Shu's deck wanted to get its mana together and protect the right creatures, hoping to kill Adam before he could cast his Simic Sky Swallower or Savage Twister. In the first game, Selesnya Guildmage was doing good work until a Repeal by Adam. Shu added Court Hussar to the table, correctly assuming it was Repeal-proof. When the Selesnya Guildmage came down and tried to make a token, a flurry of Electrolyze, Gather Courage, and counterspells either tried to eliminate or rescue it, depending on one's perspective. The Guildmage did perish, but that only left Adam wide open for Shu's Grand Arbiter Augustin IV. With the Arbiter preventing Adam from casting more than one spell a turn, and with Shu having a pair of Remands in hand, the game quickly fell in Shu's favor.

In their second game, Shu started out with an untapped Breeding Pool and a Utopia Sprawl for white. Three colors on turn one seemed good to this reporter. A turn-two Court Hussar was Remanded by Adam, but it stuck on turn three and hunted up a Remand of its own. Hussar began its rather laconic attack frenzy, joined by a Vitu-Ghazi, and later a Loxodon Hierarch. Adam looked a bit pained by the growing army on Shu's side, yet he had nothing to do until turn seven. At that point he tapped out for Simic Sky Swallower, a spell he and the crowd knew was going right back to his hand. Shu did indeed flash the Remand, then played Selesnya Guildmage next turn and earned the concession.

Kendall Bright once again led out strong with his Orzhov deck, but this time Ichirou's deck had given him more cards to play with. Back and forth they traded creatures and removal. On an empty board, Kendall played Castigate, forcing Ichirou to reveal double Giant Solifuge and a Demonfire. One Solifuge was removed, but the other came down for a quick four points. Kendall played a Ghost Council which got RFG-ed for good off Demonfire. Ichirou followed with a freshly drawn Lyzolda, the Blood Witch. 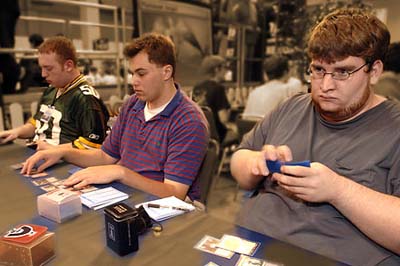 The Slumpbusters battled back to even the match with Bright's win.

Well, Kendall Bright came to play, showing Ichirou the ideal card against an opponent's 3/1 and 4/1: Orzhov Pontiff. The Pontiff wrecked Ichirou's board, although Kendall was still dangerously low in life. Kendall began the slow attack back, playing Ghost Council and gaining life whenever possible. Ichirou had a one-turn window to draw a Demonfire for the win, but it was not to be and Kendall took the match.

Once again the hopes rested on the third teammate, but this time the Americans were up a game. Unfortunately for Jon, the second game was decided on a severe mana disparity. Shuhei was up to seven mana before Jon could get his four. Shuhei's decision to include Angel of Despair was certainly vindicated this game, and as the angel came down and blew up a land, Jon scooped up his cards for the imminent third game.

For the final game of the match, Jon was on the play, a position his speedy deck enjoyed very much. Swearingen was quite displeased by his initial seven, even going so far as to curse a blue streak, but in the end decided to keep. Nakamura threw back his first hand but kept the next six.

Jon's distaste for his hand became apparent when, after his Mistral Charger and Veteran Armorer were destroyed, nothing came out to replace them. Land after land Jon played, with only the occasional Lightning Helix or Char cast as needed. High enough in life to be in safe territory, Shuhei cast a Congregation of Dawn, placing on top two Angels of Despair and a Skeletal Vampire. The fliers were too much for Jon's flooded draw and he extended the hand, to the crowd's applause and excited cheers of the Japanese.

Double Shu Desu wins the match and will start Day Two as the only team with a perfect record!