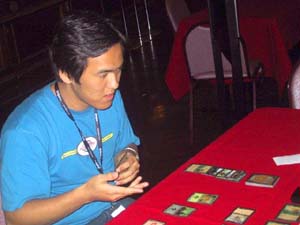 After Khoo defeated Seck in the final game for the last team place at nationals Seck has been biding his time waiting for his chance to pay him back. With both players sitting on 4-2 records the only way that they would be advancing would be via a win, with the loser feeling the sting of being one of the few name players not to be sitting down drafting Odyssey tomorrow morning.

After taking a double mulligan Khoo commented that his deck had mulliganed more times than he could count on his hands. Seck took advantage of Khoos slow start, casting a turn 2 Patrol Hounds and a turn 3 Beloved Chaplain. When Khoo could only muster a Druid Lyrist to try and stop the beats, Seck applied more and more pressure casting a Mystic Visionary on turn 4 and an Aven Flock a turn later. After having his freshly cast Crashing Centaur repelled Khoo decided that the best way to win the match was to move quickly onto game 2.

When faced with the decision to play or draw Khoo decided to let Seck go first, despite the speed of his deck in game 1. As soon as Khoo played his Minotaur Explorer Seck joked that he was taking another mulligan and that looked to be the case when it was Aether Bursted back to Khoos hand during the attack step, but Khoo played it again this time discarding a mountain. Seck played a Otarian Juggernaut and took the hit from the Minotaur dropping him down to 17 life. Keeping the momentum going Khoo dropped a Ember Beast to which Seck replied with a Patrol Hound, holding back on defense to double block the Minotaur and use the Muscle Burst in his hand.

When Khoo attacked a turn later, Secks plan came into fruition trading the Muscle Burst for the Minotaur, with nothing left to do he passed the turn. Seck attacked back with his minions, and summoned a Krosan Archer. Just when it seemed Khoo would lose control of the board he cast a Ghastly Demise on the Juggernaut and played a Krosan Archer of his own. A Chainflinger joined Khoos side of the battle and Seck added his second Krosan Archer and a Nantuko Disciple. Not to be outdone Khoo cast a Dirty Wererat and passed the turn back to Seck. 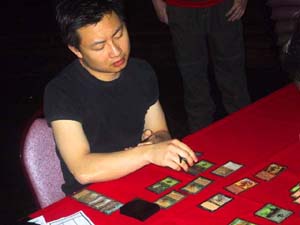 Figuring that it was up to him to take charge Seck sent his two archers and patrol into the fray. When the smoke cleared Khoo only lost two life to an unblocked archer, using the Ember Beast to block a pumped Krosan Archer, and his own pumped Krosan Archer blocking the Patrol Hound with +2/+2 from the Nantuko Disciple. Khoo then attacked back with all his men reducing Seck to 8 life, and then sat behind his minions as a thresholded Chainfliger took 4 turns to finish the job.

For the final game Seck forced Khoo to go first and on his third turn Khoo cast a Minotaur Explorer that was again met with Aether Burst. Trapped on 3 lands Seck played a Cephalid Looter desperately hoping that he could find his 4th mana to get his deck rolling. Khoo was relentless in his assault with a Nantuko Disciple and a Rabid Elephant adding more pressure to the already dropping hopes of Secks day 2 appearance. When Khoo recast his Minotaur Explorer on turn 6 and discarded an Elephant Ambush Seck scooped up his cards in disappointment.