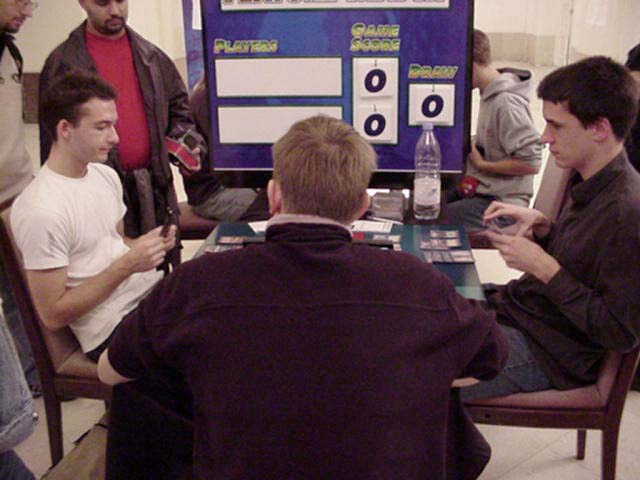 Both these players are quite well known Pro Players. Benedikt has two Pro Tour top eights in Worlds 2000, and Chicago 1998, where he finished fourth both times. On top of that, he is Austria's National Champion. Jelger's results are solid but not quite so impressive, as he has two Pro Tour top 16s, the most recent in Barcelona this year. This is also Klauser's home Grand Prix, as he hails from the city of Vienna.

A fairly slow start saw the first play of the match being Jelger's Dusk Imp on turn three, and Benedikt played an Aven Fisher. Wiegersma played a Call of the Herd, and in honor of his country's National Champion, the token was a photo of Tom van de Logt's head. Of course, he played the Flashback again and put yet another portrait of the World Champion into play.

Benedikt amply held off the Elephants with Face of Fear, and Jelger had to use Patriarch's Desire to remove it. Benedikt played a Childhood Horror to add to his air force and the game became a straight race between his Fisher and Horror, and Jelger's Springing Tiger and Elephant token. This was a race that the Austrian wasn't winning, so he held back with these and a Dirty Wererat.

Jelger played a Patriarch's Desire on the Childhood Horror, but Benedikt kept it in play by sacrificing a Ravaged Highlands and putting a regeneration shield on the Wererat. Still the Dutchman held the advantage, attacking with his Elephant and Springing Tiger. Since the Wererat could no longer block, Klauser took the damage and went down to four life. He didn't draw anything that would allow him to block on his next turn either, and scooped. 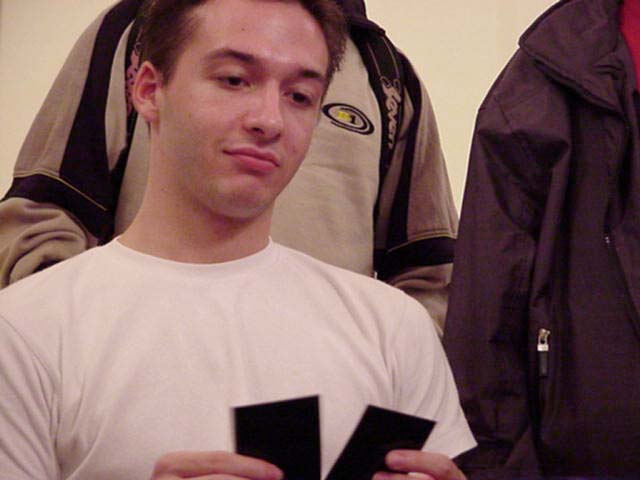 Jelger went first, and Klauser cast Careful Study on the first turn. This is a card that a lot of people would prefer not to play, and he discarded a Last Rites to it as well, suggesting that perhaps his deck is not so good.

In any case, Jelger played a Mystic Visionary, and a Springing Tiger, while Klauser had these covered with a Cephalid Looter and a Dreamwinder. Fearing a combat trick Klauser didn't block the Tiger as he was tapped out. Jelger also played a Dusk Imp and countered Klauser's attempt to Dematerialize it with a Shelter. This put Klauser further behind in terms of board position and card advantage, so this time when Jelger attacked with the Tiger, Benedikt basically had to block with his Dreamwinder.

Jelger didn't have a combat trick, so the creatures merely traded. Benedikt played an Aven Fisher and Wiegersma ignored it, attacking with Mystic Visionary and Dusk Imp to give Klauser a card back, but reduced him to nine. Klauser played a Barbarian Lunatic, but Jelger was still confident, as he played Call of the Herd and then Flashed it back all in the same turn. However, his confidence was misplaced, as Benedikt played a Shower of Coals with Threshold to wipe Jelger's board clean. Three turns later Benedikt had taken the game with his Lunatic and a top-decked Whispering Shade. 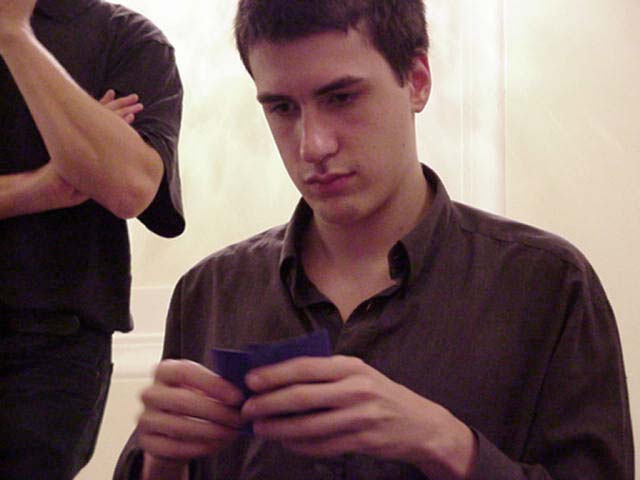 Jelger had a simple decision to take a mulligan with a seven-card hand that didn't contain any lands. His six card hand was better, as Benedikt discovered when he played Peek, revealing Call of the Herd, Shelter, and Fledgling Imp, and enough land to cast them all.

The first creature played was Puppeteer, and once again Tom van der Logt made an appearance as Jelger cast Call of the Herd. Benedikt had to take one damage from his Barbarian Ring just to Dematerialize it. Jelger played the Flashback to make a token once again.

Klauser's position wasn't so bad though, he had a Puppeteer and a Balshan Griffin. Jelger only had the Fledgling Imp to add to his token, and Klauser played Gravedigger, fetching a Face of Fear he had discarded to Careful Study earlier in the game.

The Austrian was clearly on top now, as Jelger's only play for his turn was a Fright crawler, although he was unwilling to attack. Jelger could give his Fledgling Imp flying to try and block the Griffin, although Benedikt would then use the Puppeteer to tap the Imp. But, of course, he had seen the Shelter in Jelger's hand and this would both prevent the Imp from being tapped but kill the Balshan Griffin as well, with no loss of cards for Wiegersma. Benedikt summoned an Aven Fisher, and attacked with just the Gravedigger, losing it to the Shelter and Imp.

Jelger now played a Repentant Vampire, and so the Puppeteer switched its attention to that. Klauser drew a Whispering Shade and started getting through some damage with it. Jelger was on only eight life, and had to block when Benedikt attacked with Balshan Griffin, Childhood Horror, and Whispering Shade. He gave his Fledgling Imp flying and traded it with the Horror, but he went down to two from the Balshan Griffin and the Shade.

Drawing a card that didn't help, Jelger congratulated Benedikt on a match well played, and packed up his cards.