Round 7: Blessed Are the Souleaters

David Sharfman is fresh off of a win at Grand Prix Paris, which, amongst many things, earned him a slot here in Nagoya. Jun'ya Nakamura is also fresh off a win that qualified him for play today, albeit a bit more recently; he was one of four players to win a Last Chance Qualifier in Nagoya on Thursday evening. These two players met in round seven with 5-1 records.

Nakamura won the die roll and decided to play first. He kept his opening seven cards while Sharfman took a mulligan to six cards he liked. 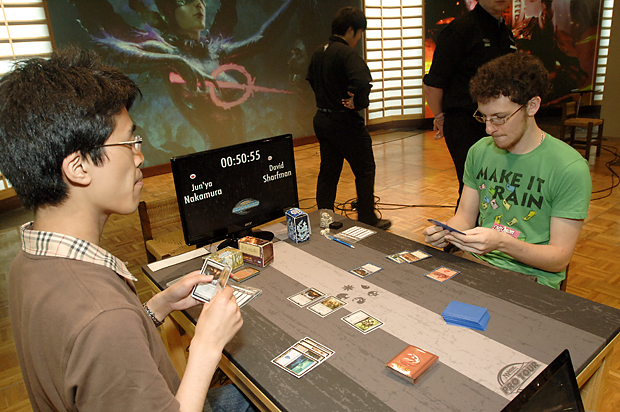 Nakamura kicked things off with a Perilous Myr on the second turn followed by Mycosynth Wellspring on the third. Sharfman had no second-turn play, but did have a Mycosynth Wellspring of his own to make his third land drop of the game. A couple of uncontested attacks from Perilous Myr brought Sharfman down to 18 as both players played Bladed Sentinel on the fourth turn. Sharfman's Chrome Steed, a burly 4/4 thanks to metalcraft, helped keep Nakamura's newly played Pestilent Souleater at bay. A second Chrome Steed allowed Sharfman to mount an offense by attacking Nakamura for 4. Binding Souleater from Nakamura kept one Chrome Steed under control for a bit, but a steady flow of attacks brought Nakamura down to 12 life.

With the pressure already on, Sharfman added Jor Kadeen, the Prevailer to his side of the battlefield, along with a Flayer Husk. Sharfman now had 25 total power of creatures threatening to end this game. Sharfman sent all of his creatures into the red zone and, with a series of blocks, Nakamura ended combat at 5 life with one creature on the board. Sharfman still had his Chrome Steed and Jor Kadeen to work with. Nakamura played the busty Chancellor of Dross on his turn, but even a 6/6 Vampire with lifelink wasn't enough to save him at his fragile life total.

Both players shuffled for the second game with only a quick glance at their sideboards beforehand. Nakamura chose to play first and took a mulligan to six. Sharfman elected to play with his starting seven cards in hand. 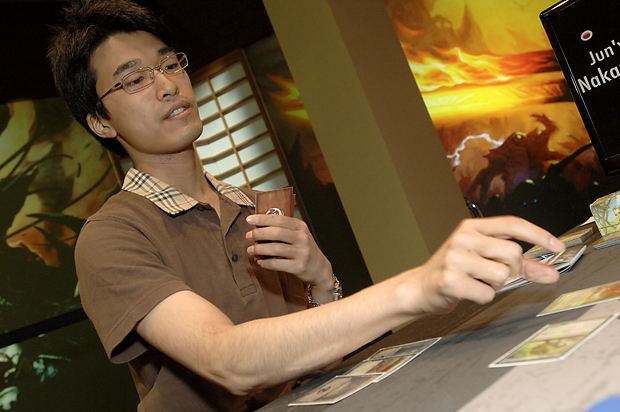 Nakamura opened with a second-turn Perilous Myr while Sharfman met it with a turn-three Trespassing Souleater. Flayer Husk and Binding Souleater joined Nakamura's board, while another Flayer Husk and a Bladed Sentinel joined Sharfman's. The former was equipped to the Trespassing Souleater and, after a couple of unblockable attacks, the life totals stood at 15 all. Nakamura played a Pestilent Souleater and left his team back to play defense. Sharfman continued his unblockable assault, which brought the life totals to 12 and 13 in Sharfman's favor. Sharfman resolved Shrine of Loyal Legions and passed the turn.

No longer content with waiting, Nakamura equipped his Pestilent Souleater with Flayer Husk and mounted his offense. Sharfman blocked with his Trespasser Souleater which was promptly returned to his hand on the following turn by Razor Hippogriff. Nakamura kept up his unrelenting attacks with Pestilent Souleater. Sharfman was content on the race and did not block. Life totals stood 4 to 9 in Nakamura's favor. 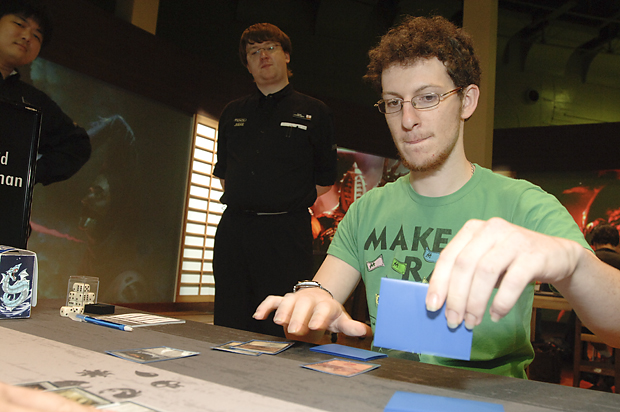 Sharfman went in for an attack with Bladed Sentinel, using Apostle's Blessing to sneak past Nakamura's defenses. Nakamura had Divine Offering for the Sentinel but Sharfman played a second Blessing, protecting it from white. While all this was happening, Sharfman's Shrine was steadily gaining counters. Sharfman cashed it in at five counters and threatened to finish off Nakamura with his army of Myr tokens. Nakamura sat at 7 life and had no answer for the tokens. After drawing a card on his turn, Nakamura extened his hand in consession. David Sharfman, defeating Jun'ya Nakamura, moved on to 6-1.