Round 7: Bluff Redux, or Swing for Two?

him, Terry! Bluff him real good!" - Osyp Lebedowicz, competitor for 'luckiest 4-2 player with a bye' in the tournament (competing against Antonino De Rosa).

As Terry Soh sat down he asked Frank Karsten what he thought of his deck. The Dutchman sighed and announced that he predicted a 1-2.

"Are you trying to bluff me?" enquired the bluffmaster himself. Unfortunately for Frank, and unbeknownst to Soh, Frank was playing it straight. His draft was a little patchy, with some colour-switching that left his deck a little precarious. Soh was letting nothing on about his deck. He had been forced to switch about in colours too, but seemed to have the better end of it. 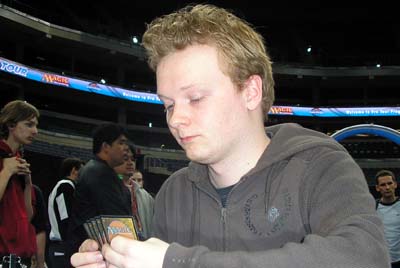 Karsten looked to end Day One on a perfect note.

Soh led with a forest, and Karsten one-upped him by playing a Forest with a Utopia Sprawl to produce blue mana. Soh had a turn-two Simic Guildmage off a pair of Forests, while Frank made full use of his SuperForest to play Aquastrand Spider. He then played a Mountain and passed.

A Trophy Hunter came out for Soh, while Frank had a turn-three Gruul Scrapper who ran straight in for the first damage of the game. Terry played an Island, signalling that he too was in the popular red-green-blue archetype. Terry attacked with his team, and when Frank blocked the guildmage with his spider, Soh tried to secure the kill by moving one of the spider's counters to Karsten's Gruul Scrapper. Unfortunately for Soh, Karsten had a Gather Courage, which forced the Invitational winner to move the second of the spider's counters across. When Frank followed up with a Streetbreaker Wurm, all of a sudden Terry looked in a little trouble. He played a Bloodscale Prowler and was forced to double block with it in order to kill the wurm. This took him to just 7 life to Karsten's 18, and a Petrahydrox threatened to be lethal.

Terry used Ocular Halo as a bounce spell, and dropped to two from Frank's attack with a 5/4 Scrapper. Frank then played out a couple more guys, and Terry scooped it up.

During sideboarding, Frank looked at his list of spells played by Terry, to make the best informed decision he could. A couple of cards came in and he shuffled up, getting ready to try to win on the draw for a second time.

Terry took a mulligan of his opening 7 on the play, while Frank was pretty happy with his grip. For turn two, Terry had nothing, while Frank had a Utopia Sprawl for his first Forest, which was then tapped for

Soh then cast a larger than average Trophy Hunter and passed to Frank, who made it two Petrahydrox. Petrahydri, anyone? There were still no attacks, but the opposing boards got scarier as Vigean Hydropon got an Ocular Halo, and Coiling Oracle jumped out for Soh to put a Gruul Turf right into play. As Karsten was running out of gas, Soh was building up an army off the card advantage from his Haloed up Hydropon. As a 3/2, Tin Street Hooligan looked just fine to everyone but Frank, who needed to find an answer to the growing Soh board fast.

His choice was Fertile Imagination, for which he named land. It was a good choice, as it made him six Saprolings, and revealed the Bloodscale Prowler in Soho's hand. The very next turn, Soh played out the Prowler, and Seal of Fire, signalling that all he had left was lands in hand. This didn't seem to matter too much though, as his board was busty to say the least.

Karsten finally found an answer to the Haloed Hydropon, but it wasn't the greatest, as it involved letting it restock on counters. Vedalken Dismisser was also a warm body on the board, but there was still a danger of chunks of his own side of the board getting bounced by targeted effects.

Frank played Izzet Chronarch to get back Fertile Imagination, and played it again. Again he named lands, and this time hit for four tokens. When Terry drew and said go, something triggered in Karsten's head.

Everyone swung in (10 tokens, 2 Petrahydri, Aquastrand Spider, Izzet Chronarch and Vedalken Dismisser) and Terry killed the spider with Seal of Fire, the Petrahydri with Trophy Hunter and Tin Street Hooligan, and two tokens with his other guys. This took Terry to six, and when he played out a Burning-Tree Bloodscale, Terry scooped it up.

Final Result
Frank Karsten 2, Terry Soh 0 (and 0 bluffs)
Frank Karsten advances to 7-0, having not lost a single game on Day One!