Round 7: Bob Maher vs. Dennis Bentley

Round 7 was a "Back to the Future" theme round in the feature match pit. 1996 Junior World Champion Justin Schneider took on Kyle Rose in one match (they actually drew so they would each clinch Day 2 with 6-0-1 records going into the final round). 1996 US National champion Dennis Bentley took on reigning Pro Player of the Year Bob Maher in the other match. Maher had a fairly typical red/black/blue deck while Bentley went out on a limb and played red/black/blue. Each player had 5 wins and a single loss when the match began and knew this was an important one. 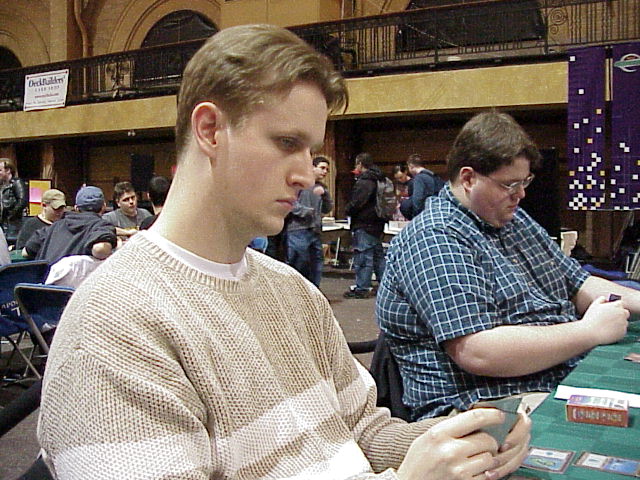 Maher played turn 4 Stormscape Master in game 1, but Bentley removed it with a Smoldering Tar. Other than a couple removal spells and a Hate Weaver that got Excluded, that's basically all Maher drew in the early game. Bentley beat him down slowly with a Cavern Harpy and then an Ancient Kavu. Maher used Hypnotic Cloud to great effect and then cleared most of the board by sacrificing two of his many lands to a Magma Burst, but he was at 2 and his only answer to Cavern Harpy was to bounce it and hope Dennis didn't draw any more blue or black creatures. Dennis didn't, but Flametongue Kavu cleared a path for Sparring Golem and Bentley staked himself to a 1-0 lead.

Bob Maher's Shoreline Raider was working overtime early in game 2, holding off Ancient Kavu and Kavu Scout. Bentley found the Plague Spores he needed to bust through and tapped out for it on turn 6, but Maher had Disrupt! Both players laughed about how savage a beating that was. Maher then untapped and cast Hypnotic Cloud with kicker to knock the last three cards out of Bentley's hand: Rushing River, Sinister Strength, and Ancient Kavu. Bentley's Stormscape Battlemage slowed the bleeding a bit, but Maher drew and played a Vodalian Serpent (with kicker) and soon Bentley was on the ropes. One Magma Burst later, it was all even at a game apiece and the players were quietly shuffling up for game 3. 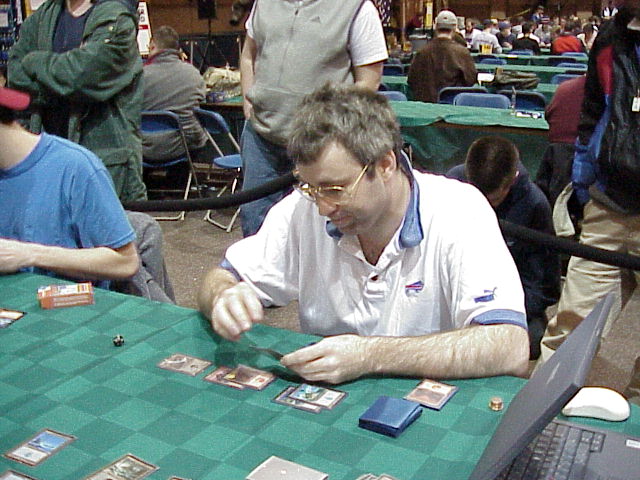 Game 3 was decided on turn 5. Bentley sacrificed a Sulpher Vent to get the 6 mana he needed for Plague Spores and Maher had the Disrupt AGAIN! Bentley's Cavern Harpy and Flametongue Kavu did their best to hold off Maher's troops, but without any color-changing tricks they just weren't enough. Maher cleared a path for his Shoreline Raider and Marsh Crocodile with an Agonizing Demise and then used Rushing River to trap Cavern harpy back in Bentley's hand. Smoldering Tar dealt with the Crocodile, but Bentley had no answers to Stormscape Master.