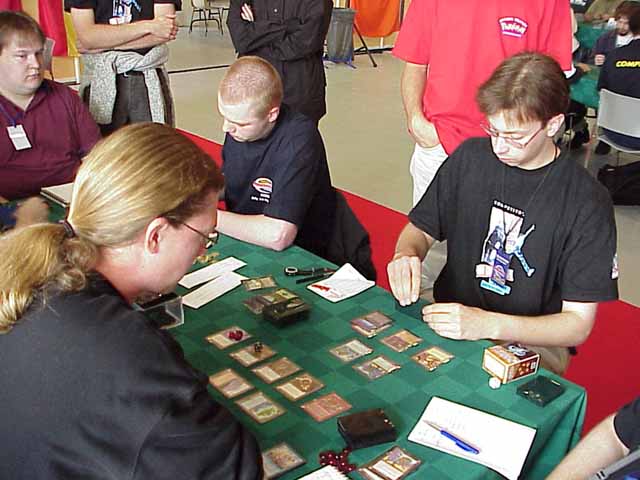 Having predicted a field-full of green decks (Angry Hermit, Stompy, etc.) many of the top players chose artifact-based strategies to combat these strategies. There are a lot of Wildfires out there, with an occasional Tinker deck as well.

Lührs is one of the competitors utilizing the Tinker strategy. His version splashes red for Goblin Welders. Surprisingly the deck does not include Wildfire.

Snepvangers is playing a rather strange Pattern of Rebirth deck he navigated to the top 8 finish of Holland nationals. The deck is quite skill-intensive, offering at least as many choices to its player every turn as control black.

In the first round Snepvangers was off to a good start with a first turn Bird of Paradise and a second turn Yavimaya Elder. Lührs' draw was very good as well. He used Grim Monoliths and Voltaic Keys to get out a turn 3 Masticore and still have mana enough to immediately kill the Bird.

Snepvangers used Eradicate to get rid of the Masticore and Duressed a Tinker out of Lührs' hand. Lührs played a Welder and a Smokestack, hoping to get rid of Snepvangers' permanents.

Although Snepvangers was losing card economy to Smokestack over the next several turns, he was gaining it back by playing Diabolical Servitude tricks - one turn he would reanimate a Yavimaya Elder, then sac it to Smokestack and end up with two more lands in his hand.

Eventually Lührs cast a Processor paying 8 life. Snepvangers found an answer in Uktabi Orangutan, but not before Lührs was able to make one 8/8 minion. For the next several turns Snepvangers was able to attack with his Masticore and chump-block with a creature he would play out of hand. Eventually he got Lührs low enough on the life total where he could no longer try attacking with the Minion.

Snepvangers proceeded to cast another 4/4 creature - a Phyrexian Plaguelord - and attack with both in order to win the game.

Second game was all Lührs as he played a turn 4 Processor paying 7 life and was quickly able to get up to enough mana to generate two tokens per turn. Snepvangers did not draw many answers and quickly fell to the power of the Minions.

Lührs was able to stop Snepvangers from casting anything for several turns in the final game when he played a Tangle Wire. While Snepvangers was struggling to regain his mana, Lührs cast yet another Processor, paying 10 life. Snepvangers used a Vampiric Tutor to find a Plains and use it to cast his Academy Rector.

At this point there were only a couple of minutes left in this round. Snepvangers needed only to draw another Swamp (in order to cast a Plaguelord and sacrifice the Rector to it) or draw a Phyrexian Tower in order to end this match in a draw. He drew an Uktabi Orangutan instead - an acceptable answer, as it gave him the ability to destroy a Processor and hold off 4 10/10 Minions next turn with Rector, Monkey and a Treetop Village.

Lührs drew a perfect card for the situation - a Rishadan Port. He used it to prevent Snepvangers from blocking and dealing 20 points of combat damage.