thought National team members could not play each other in the tournament?" asked Gabe Walls as we wandered by the Feature Match area where Paulo Vitor Damo da Rosa and Willy Edel were preparing to square off in a battle of 6-0 records.

Paulo Vitor is the Captain of the Brazilian National Team, but Edel is not actually on the team. Gabe's confusion was understandable though as Edel has been one of the most visible members of the Brazilian Magic scene for the past two Pro Tours with back-to-back finals appearances at Charleston and Kobe - the only two Pro Tours he had attended this year. The former finish came at the side of Paulo as a member of Raala Pumba. Paulo has been on a tear this season with money finishes at every Pro Tour he has attended including a Top 64 in Kobe.

Neither of these two players have practiced the draft format much since Kobe, instead choosing to focus their energies on the 60-card portions. Considering that the two of them have combined winnings of $46,850 in their past two Limited tournaments, it is safe to say that they have Draft pretty well covered.

Greater Gargadon was the lead off play from Edel, who was on the draw. Paulo suspended Errant Ephemeron, who doesn't hit the ball as hard but has a higher on-base-percentage than the red monstrosity.

Blazing Blade Askari came down on Edel's side. While Paulo could not advance his board on turn three due to technical difficulties with a Terramorphic Expanse, Edel smashed in for 2. He cycled through Chromatic Star to play Amrou Scout.

Tivadar of Thorn for Paulo seemed like a nice answer for the eventual Gargadon, but for the time being Edel grinned at the rarely used - and little known - colorless enabling ability on the Blazing Blade and attacked. Stormcloud Djinn came down on the other side of the board, but it was not a potential blocker. Edel saw to it that it could not attack either by hitting it with a Rift Bolt. He added Soltari Priest to a board that included a recently scouted Amrou Seeker.

Paulo seemed to have all the answers to Edel's board though. Errant Ephemeron was online, Lightning Angel joined the battle, and Looter il-Kor taunted the Soltari priest from across the Red Zone.

"Three in pool," announced Edel as he prepared to sacrifice those lands to the Gargadon, which, shortly after coming into play, received some Griffin Guidance. Paulo blocked as best he could - killing everything but the Gargadon and the Scout - and lost only his Looter and 13 life. He did not want to put his Lightning Angel at risk just yet and kept it well away from the unblocked flying behemoth. He dropped to 1. 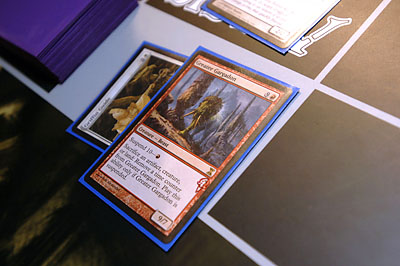 This bodily harm brought to you by the letter G and the number 11.

Edel fell to 4 on the counterattack. Paulo still had his Lightning Angel to absorb a blow from the Gargadon, and Edel could only hope for Grapeshot off the top. Orcish Cannonade was close, but even if it would have worked he didn't even have the mana remaining to cast it.

Turn-two Errant Ephemeron from Paulo was followed up with turn-three Knight of the Holy Nimbus. Edel had made an Askari. Paulo was not willing to get into a bad trade with the Blazing-Blade, and Edel made a second. Paulo got back across for two and played Flickering Spirit.

Edel bashed for four and summoned an Amrou Scout. Paulo hid behind Watcher Sliver with his Ephemeron on the immediate horizon while Edel's Cannonade took out the Spirit. Edel then used another Cannonade and Grapeshot to take down the Ephemeron - Edel was at four.

Thunder Totem represented a fresh flier for Paulo, and when Edel put Griffin Guide on an Amrou Seeker he could not attack - he needed to keep back for the flier. Lightning Angel for Paulo allowed Paulo to send in two fliers at one blocker. Edel ate the Angel and dropped to 2. I was sure Paulo had a burn spell in hand but he just put the Lightning Angel in the bin and passed the turn.

Edel played Skycutter on one turn and Soltari Priest on the next. Paulo had no plays. Finally he summoned Watcher Sliver and the reason for his attack became apparent: Grapeshot was the card in his hand several turns ago - he just needed another spell to make it lethal.