Round 7: Brian Davis vs. Diego Ostrovich

Both of these players were eager to get the decks they wanted. Davis bid aggressively on the "C" deck, a wild collection of painlands and Cephalids, with plenty of single-copy strangeness. Ostrovich's deck is more homogeneous, a nearly mono-blue wizard deck centered around the letter "P". Davis would start with six cards and thirteen life; Ostrovich, six and twenty.

Davis mulliganed in the first game, and kept a painful two-lander. Ostrovich led with Disruptive Pitmage, and Davis had to take four from Tarnished Citadel and Grand Coliseum to Counterspell it. Ostrovich followed up with Possessed Aven. 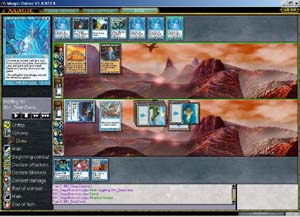 (click to open full-size in a new window)All Davis wanted was a land, preferably one that didn't sting. Phantom Warrior added to the beats. It didn't take long for Davis to pack them up.

"I had a reasonable hand and then I drew three Cunning Wish!" - Brian Davis

Ostrovich again got a curvaceous start of Disruptive Pitmage, Phantom Warrior and Possessed Aven, but unfortunately for him, Davis had drawn lands this game. When Ostrovich tapped out for the Aven on his fourth turn, Davis grinned from ear to ear.

"That's the game boys, I've got Llawan and he has no way to remove it." - Brian Davis

He tapped four and then played a Dragon Lair, busting out the Empress. Ostrovich's whole board went back to his hand. 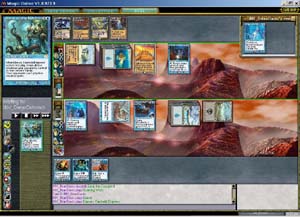 (click to open full-size in a new window)Cunning Wish got Dromar's Charm, and then Davis got the beats going with Crosis, the Purger. Another bug reared its head here, with Llawan preventing Ostrovich from playing his blue morph creatures face-down. Fortunately, it had no effect on the game-state as Davis smashed in, stripped Ostrovich's hand, and then untapped and killed him.

The final game was not pretty. Ostrovich stalled on two mana, then used his Voidmage Prodigy to stop Cephalid Looter. Davis had something much more savage waiting in the wings: Cephalid Constable. When Ostrovich missed his next land drop, Davis was able to lock him at two lands.

Shockingly, he had no trouble winning from that position.