Round 7: Brian Dudley vs. Daniel Campisi 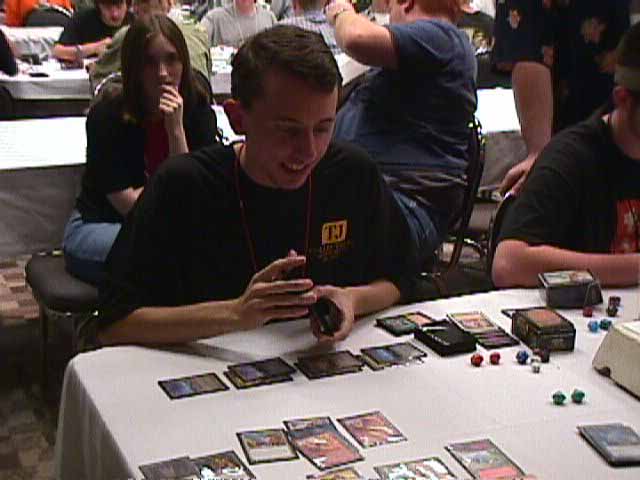 Brian Dudley is from Boston, where he plays at TJ Collectibles. He was playing a version of Control Black, designed by Mike Flores and used by Jon Finkel to win the US National Championship. Previous to this match, he had lost almost every first game in the tournament, only to come back and win after sideboarding. Daniel Campisi hails from Buffalo, NY and has been tuning his Remembrance/Sneak Attack deck for months. He lost only two games in all of the previous matches. These two were playing at the number one seat and many spectators were gathered around to watch the exciting matchup.

Daniel won the die roll and chose to play first. He started off by laying a Mountain and a Claws of Gix and Brian responded with a Swamp and a Duress. Brian examined Daniel's hand, which contained a Grim Monolith, a Remembrance, two Ghitu Slingers, and a land, and Brian made him discard the Grim Monolith. Daniel continued to draw land to help his mana shortage and Brian played a Spawning Pool and then played a Swamp and a Skittering Skirge. Daniel tapped out to cast Ghitu Slinger, killing the Skirge and Brian responded with an Eradicate on his next turn. Brian got a chance to look through the entire deck and remove the Ghitu Slingers from the game because of that costly mistake on Daniel's part (tapping out with Claws of Gix in play, making him unable to fizzle the Eradicate). Still, Daniel continued to play his game, casting a Remembrance and biding his time. Brian attempted to put the pressure on with a Skittering Horror, but Daniel was able to draw an Academy Rector in time. Once he had the Rector, he began by sacrificing it to get another Rector and to put an Angelic Chorus in play, and repeated the process with the second, third, and fourth Academy Rectors to gain nine more life and put a Phyrexian Reclamation and two Sneak Attacks into play. Once Daniel had these four enchantments in play, he simply had to wait for a Crater Hellion or False Prophet and they would allow him to establish board control. Despite Brian's best efforts, Daniel eventually drew a Serra Avatar and attacked Brian for 84 points of damage. 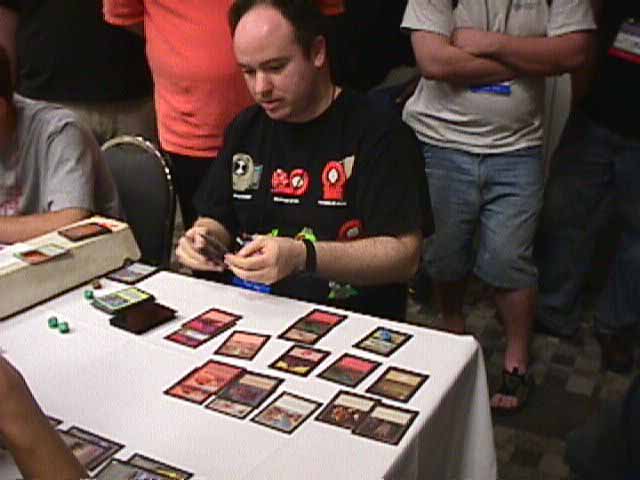 For the second game, Brian sideboarded out many of his weenie control cards like Massacre, Perish, and Engineered Plague for a little extra Phyrexian Negator beatdown and extra control in the form of discard, Stromgald Cabal, and Powder Keg. Daniel Campisi brought in a Light of Day, a COP: Black, and two Replenishes against Brian's black creatures and discard. Brian chose to play first and had a strong start with a Swamp, Dark Ritual, and a Skittering Horror. Daniel played a Plains and said "Done." Brian then untapped, drew, and attacked with the Horror. He had failed to draw a land, so at the end of Daniel Campisi's next turn, he Vampiric Tutored for a second Swamp, after Daniel had played a Mountain and a Grim Monolith. Brian played the second Swamp and attacked again with the Horror, bringing Daniel down to 12, but he had no disruption to stop Daniel's Academy Rector from coming out the next turn. Pretty soon, Campisi had a Sneak Attack on the board, he had cleared away the Skittering Horror with a Crater Hellion and then began attacking and blocking with Shivan Phoenix. Brian was almost able to disrupt him with a late Unmask and race him with a Phyrexian Negator and a Stromgald Cabal, but Daniel drew a Serra Avatar to join the Phoenix in one final attack.