Round 7: Brian Kibler vs. Justin Gary 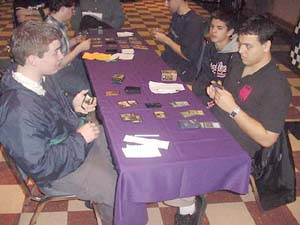 Both of these PT stalwarts are 6-0, going into this round, but Kibler one-ups Gary: the Invitationalist and GP Top 8 fixture hasn't lost even a single game with his sleek black/red concoction.

Gary, whose latest achievement of note is finishing second in the Nice Masters, is playing blue/green with a slight white splash – his deck's main path to victory is Silvos, Rogue Elemental, augmented by a pair of Riptide Shapeshifters to put it directly into play.

Kibler had to mulligan playing first, but he had the trademark turn-three play of nameless colorless typeless 2/2. Oddly, Gary had the same exact play (ok, not-so-oddly). Kibler swung and Gary made the obligatory block one must make when facing a morph guy with swamps and mountains across the table, and Kibler gleefully flipped over Grinning Demon.

Now Gary had a problem. He played out another morph guy, which was shocked, but then got a Barkhide Mauler down. Kibler didn't care. He kept swinging with the 6/6 and added Fallen Cleric and another face-down creature to his side.

Gary played his sixth land and stopped to think. After three minutes, Kibler interjected, "Come on, it can't be that hard."

Gary gave in to Kibler's protests and made a play – Snarling Undorak and go. Kibler untapped, looked things over, and cast what looked to be a devastating full-strength Death Pulse on the Mauler. But Gary was ready for such shenanigans, tapping his last two mana for Meddle. Fallen Cleric hit the bricks, and the game was suddenly not looking so bad for Gary.

"And they told me not to run that one," Gary said of Meddle.

Kibler couldn't hid behind the double ping of the Demon, so he sent it in to be double-blocked, trading it for the Undorak. Gary cast his Riptide Shapeshifter. "That can't be good for me," said Kibler.

Kibler played first again in Game 2, even though Gary tried to persuade him that doing so was card disadvantage.

Kibler played Lightning Rift on turn 2, a morph on turn 3, and then flipped said morph—Grinning Demon again!—on turn 4. Gary was less than pleased.

Screeching Buzzard game Kibler an aerial assault as well, but the Demon alone was too much for Gary. He buckled under its 6/6 heft after a few chump blocks, and he couldn't get his Shapeshifter out in time.

"Turn-4 Demon has won me a fair share of games," said Kibler.
"Yeah, but I'm not doing bad against it," retorted Gary.

Gary sided in a Disciple of Grace as anti-Demon measures in game 3, and Kibler sided in a Lay Waste to try and keep Gary from five (or six) mana for as long as he could.

Gary came out of the gates with an Elvish Warrior and a Mistform Wall, but when Kibler played a face-down creature, Gary assumed the worst. 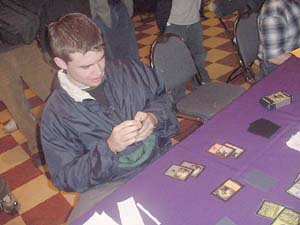 "Why?" he wailed, "Why does this always happen to me?"

"What, your opponent plays a morph guy on turn three?" quipped Kibler. Little did Gary know, it was just a Fallen Cleric.

Kibler also had out Lightning Rift, and this time he had a cycling-heavy draw to capitalize on it. Cycle Solar Blast, deal two more to Elvish Warrior. Cycle Dirge of Dread, give my guy fear, kill your morph guy. Gary winced. It got worse when Gary lost his Wall to the unmorphed Cleric.

Gary was holding a goodie, however, and dropped Centaur Glade. "What?!" yelped Kibler, "Double Shapeshifter, Silvos, Centaur Glade? That sounds like the kind of deck you'd read about on the Internet." How pointed.

Kibler attacked, and killed the first Centaur token with Pinpoint Avalanche, allowing him to get lots of damage through. Gary made another token and deployed a morph guy.

That's about when Kibler decided to go for it, tapping low and casting the nasty Insurrection. Gary had to read it, after which he raised his eyebrows. "...And they gain haste. That's an exciting spell you have there."

Gary glanced at his morph guy, and decided he didn't want Kibler to get anything good, so he paid a blue to unmorph Aphetto Alchemist. Then Insurrection resolved.

Gary, an inch from death, had the answer: Choking Tethers. He tapped four of the five creatures Kibler controlled, and ended up only taking 2 damage from the so-called "Insurrection." Shortly thereafter he realized the error of his ways – had he not unmorphed the Alchemist, he would have gotten back a 2/2 instead of the vastly inferior 1/2. 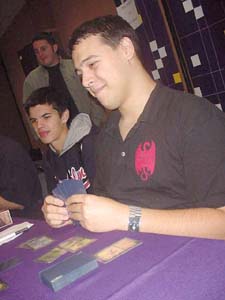 Kibler swung in with his now two Fallen Clerics and Screeching Buzzard. Gary was forced to trade the Alchemist and a Vitality Charm for one of the 4/2's, losing a card unnecessarily thanks to his earlier subtle gaffe. A Centaur traded with the other, leaving Kibler with just a Buzzard and Gary at 6 life.

Gary made another Centaur and attacked, then played a morph guy. Kibler swung back, taking Gary to 4. Gary studied the board, counted his mana. His morph guy was Snarling Undorak, but even with the Glade and a ton of mana, he was one damage shy of killing Kibler that turn. One damage that a Vitality Charm could have provided, had he not had to use it after foolishly morphing his Alchemist in response to Insurrection.

Magic: a game of inches.

Kibler made him pay on the next turn, attacking for 2 and sealing the deal with Shock.

"I made a mistake and I lost," said Gary. "I can appreciate that."