Round 7: Brian Kibler vs. Pierre Malherbaud 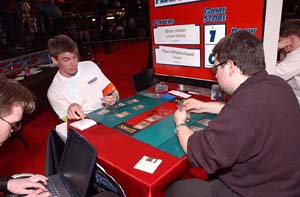 "It's do or die time," Mark Rosewater commented, walking past.

With a 2-3-1 record the popular American is already out. With a 3-2-1 record the Frenchman Pierre Malherbaud still has it all to play for.

Malherbaud started with a Crypt Creeper which promptly clubbed itself to death with a Crackling Club from Kibler. Then the Frenchman didn't seem to have anything to play as Kibler dropped two Pardic Arsonist and started serving.

A Morbid Hunger took care of one of them and Malherbaud dropped a Patriarch's Desire on the other hoping to finish it off with a Cabal Torturer. This plan went horribly wrong when Kibler saved the Arsonist with a Muscle Burst. Malherbaud had a much better start in game 2 with consecutive Mongrels on turns 2 and 3. Kibler summoned a Werebear and then thinned some of the land out of his deck with a Rites of Spring for four.

Malherbaud hadn't found a third land but pitched Acorn Harvest to a Mongrel and added it to his strong offensive. Kibler's hasty Firecat didn't quite match this attacking force but he flung it into the red zone regardless.

Still stuck on three land the Frenchman didn't appear to be doing too badly as an Organ Grinder joined the party. Kibler was on 7 life while Malherbaud was on a much healthier 15.

Kibler swung with the Werebear and Pardic Firecat. 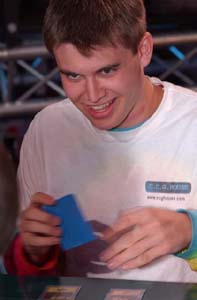 He pitched his hand to Rites of Initiation, simultaneously gaining threshold for the Werebear, and putting a ridiculous amount of damage on the stack.

Ouch. It looked like game 2 had been brought to another abrupt and savage end.

But Brian Kibler is a nice guy and wasn't about to play dreamwrecker. He conceded with lethal damage on the stack to allow the Frenchman to advance to day 2.