Juza went off quickly with Stormfront Pegasus, Infantry Veteran, and Runeclaw Bear, the latter of which traded against Nuijten's first play, Barony Vampire. Nuijten had a replacement Barony Vampire while Juza restocked on Bears—or animals, in any case—with Silvercoat Lion.

The second time around the Barony Vampire didn't take down the attacking 2/2, thanks to Juza's Safe Passage. Nuijten passed his turn without a play, though he did have Combust to surprise the attacking Stormfront Pegasus. Unfortunately for him, Juza's Pegasus, his Silvercoat Lion, and Infantry Veteran were not the only ones attacking. They were joined by one of the format's sneakiest creatures, a Forest surprise animated by Awakener Druid which made the combat step lethal. 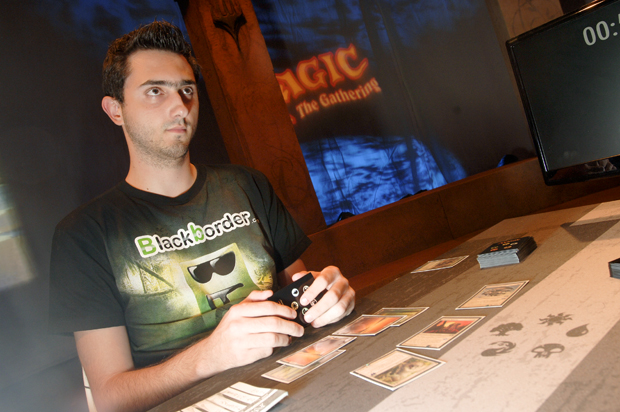 Martin Juza's army of Bears made things unbareable for his opponent.

For the second game Juza drew a hand of five Plains, Silvercoat Lion, and Honor of the Pure. Tempting. . . but no. His second hand had Honor of the Pure and a few white flyers; too bad it only had one Forest for land.

Juza picked up the first three cards of his next hand, and instantly declared, "Keep!" They were Infantry Veteran, Plains, and Forest. Unfortunately, the rest of his five-card hand turned out to be more Plains.

And sure enough, Nuijten led with a solid curve of Barony Vampire, Vulshok Berserker, and Stone Golem. Juza topdecked Assault Griffin, but the Griffin died to Deathmark and Juza soon followed under the onslaught of monsters. 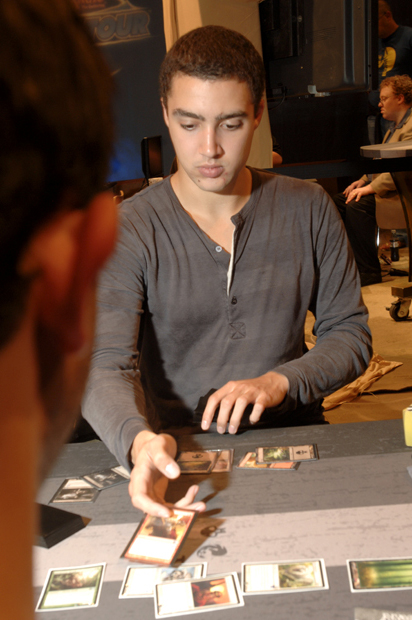 Juza shook his head, looking at his opening seven. It did have two Infantry Veteran, Silvercoat Lion, and once again Honor of the Pure, but only one Plains. Nevertheless, he kept. This time risk led to reward: he had another Plains for his second turn and things were quickly looking grim for Nuijten. His Goblin Piker was a faster start than any he had had so far in the match, but still couldn't quite compare to the Silvercoat Lion, double Infantry Veteran. He shrugged, simply attacked with the 2/1 Goblin, and summoned Barony Vampire.

By now, Juza had found a third land, and not just that, a Forest even! This gave him the option of not casting Honor of the Pure and, after thinking long and hard, he went with Sacred Wolf instead. Nuijten cast Black Knight, a veritable bomb against his opponent's white creatures, able to fend off Sacred Wolf via first strike and all the others via protection from white.

Juza ripped a fourth land and took to the air with Cloud Crusader. Nuijten shot it down with Combust at end of turn, and then stole it for his side through Rise from the Grave. He now controlled Cloud Crusader, Black Knight, Goblin Piker, and Barony Vampire to Juza's Sacred Wolf, Silvercoat Lion, and two Infantry Veterans.

Juza, however, was not willing to let go that easily. He cast Awakener Druid and attacked with the resulting 4/5 Treefolk, which quickly became 6/7 and put Nuijten at 6. However, Nuijten had Deathmark for the Druid. He then summoned Chandra's Spitfire and attacked with Juza's own Cloud Crusader. The Czech player could only cast Honor of the Pure and pass the turn right back. Nuijten attacked with his two flyers to drop Juza to 11, and also passed.

Juza went deep, deep down into the thinking tank before his next move. He had just drawn a second Honor of the Pure and was pondering the possible outcomes of the turn's combat step. In the end he cast the enchantment and went in with his entire team. Sacred Wolf and one Infantry Veteran died on his side, Goblin Piker and Barony Vampire died on Nuijten's. The second Veteran came through and Nuijten fell to 3.

Silvercoat Lion and Infantry Veteran smashed in once again on the next turn, and survived thanks to Juza's Safe Passage. Nuijten wasn't quite as lucky, losing Chandra's Spitfire as well as Cloud Crusader, and was down to just Black Knight.

But now it was Nuijten's turn to get some help from his deck; first he got Nantuko Shade, which traded with the attacking Infantry Veteran, then Canyon Minotaur showed up, and finally Sign in Blood (down to 1) brought about Quag Sickness which turned the former 4/4 Silvercoat Lion into a lowly 1/1. Canyon Minotaur attacked, with Black Knight back on defense.

That was exactly the opening Juza needed. He summoned Awakener Druid and thus had two creatures able to attack. Nuijten flipped the last card in his hand, a land, which couldn't and wouldn't help him. 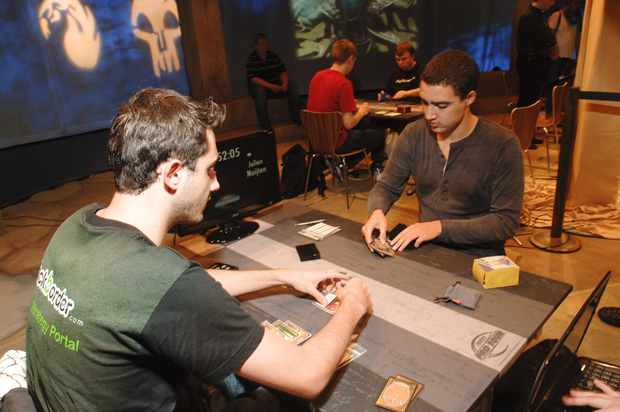