Round 7: Chi-Chung Hwang vs. Itaru Ishida

The final match of the day was a classic battle between Chi-Chung with Blue Green and Japanese star Itaru Ishida with the Red-Green beats. Each player made traditional openings with Basking Rootwalla on one side and a Llanowar Elf on the other. Quiet Speculation for two Roar of the Wurm and a Deep Analysis put the early game in Chi-Chung's favor.

Ishida was undaunted and got in for one with his Elf and played a Wild Mongrel. Chi-Chang had no attack with Walla and played an Aquamoeba and passed turn with Logic mana up. When Ishida attempted to Volcanic Hammer the Aquamoeba, Chi-Chung did just that, which cleared the way for another Wild Mongrel.

Chi-Chung played his fourth land and Roar of the Wurm. The game started to shift toward Ishida when he enchanted his Mongrel with Elephant Guide and swung into the Wurm but Hwang chumped with his Walla.

He got in for six with his token and made another. Aquamoeba chump blocked the enchanted Wild Mongrel and Ishida made a Phantom Centaur. He double blocked a Roar with his second Mongrel and the Centaur and fell to a precarious four. Hwang Speculated for two Deep Analysis and a Ray of Revelation and played another Mongrel.

Ishida attacked with the Mongrel and Centaur. Hwang disenchanted the Guide and had no blocks. Ishida discarded a Violent Eruption—killing the Wild Mongrel—and a basking Rootwalla. All told, Chi-Chung took nine. He took three more when he flashed back Deep Analysis and went to two to flash back another. He was looking for a Wonder. Careful Study did not find it for him either and he passed the turn back to Ishida with four creatures and only a lone Roar to hold them off.

Both players kept their openers. Chi had the careful Study double Mongrel opening and Ishida Firebolted one of them. Aquamoeba came down on turn two and Ishida Hammered it. He took three from the Rootwalla and Chi-Chung passed back the turn holding Unsummon for the Call of the Herd that Ishida played. 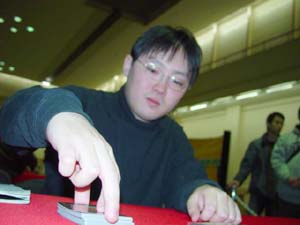 He took three more from the Walla and Wild Mongrel came down. Ishida flashed back the Call and chose not to block the Rootwalla on the next turn. The Walla was Firebolted on the following turn and when Chi-Chung ripped a Ravenous Baloth a turn later it was 'killed' with a Threaten.

The Mongrel ate a Call token in combat but a flashed back Firebolt finished it off. Ishida's Mongrel continued to attack and was eventually joined by a Centaur. Chi ripped a Ravenous Baloth but Ishida had the Violent Eruption. He followed up with a Grim Lavamancer.

Chi had been holding back land for a Turbulent Dreams in hand but when he drew a Quiet Speculation and could not cast it and flash back a Roar of the Wurm that plan seemed less wise. He found two Roars and a Ray of Revelation and used Turbulent Dreams to return the Centaur but it did not matter. The Grim Lavamancer started to eat away Ishida's graveyard and the game was quickly over.