Round 7: Chikara Nakajima vs. Tsuyoshi Fujita 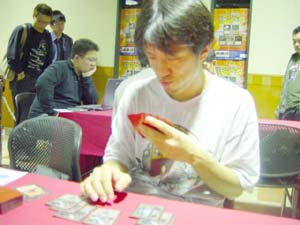 This round was a match between opposite ends of the pro spectrum. On one hand, Tsuyoshi "Mr. Rolly" Fujita, the flamboyant household name after his Pro Tour - Tokyo finals appearance and subsequent attendance of the Magic Invitational. On the other, Chikara Nakajima, an anonymous Pro Tour regular who has yet to make his mark.

Both players mulliganed to start the match. Nakajima's Rootwalla met Chainer's Edict. His Wild Mongrel survived to swing. That was enough advantage for him, as he Noted a couple cards into his graveyard then dropped Standstill. Fujita responded with Tainted Pact to dig up a swamp.

Nakajima hit and hit again. Fujita was content to bide his time. He hit five swamps and Cabal Coffers and still made no move. Nakajima attacked and pitched Wonder, bringing Fujita to eleven. Finally, Fujita played Skeletal Scrying for two, cracking the Standstill at end of turn. Tainted Pact flipped up Rancid Earth, and he took that too. Nakajima discarded a Rootwalla into play, and now it was Fujita's time to strike.

He started by Sludging six of Nakajima's seven cards. He kept Aether Burst. Then Fujita Edicted away the Rootwalla. Another Edict forced the Burst from his hand. Things did not improve for Nakajima from there. He replayed the Mongrel and watched it fall to a flashed-back Edict. Rancid Earth deprived him of his forest. He found a replacement. Fujita Earthed again. Then he busted out a Haunting Echoes that left Nakajima with just Werebears, Careful Studies and Roars. Diabolic Tutor Fetched the Nantuko Shade, and in two turns it was over. 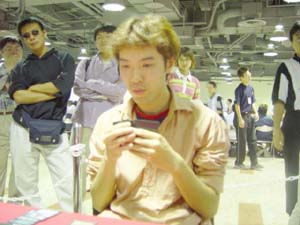 Game 2 started out inauspiciously for Nakajima, thanks to a double-mulligan. His first three plays of Mongoose, Rootwalla and Monogoose met Innocent Blood, Chainer's Edict and Mutilate, respectively. A third Rootwalla got to stay while Fujita fished out a Nantuko Shade with Diabolic Tutor.

Nakajima's one green mana kept him from busting out Bearscape. He hit for three. Fujita destroyed his Centaur Garden with Rancid Earth and swung for six. Aether Burst set him back. Nakajima ripped forest and hit for three more, but he was short on time. Chainer's Edict took out his monster, and Fujita threatened to deliver the killing blow next turn. With no action in hand and none waiting at the top of his deck, Nakajima couldn't intervene.