Round 7: Choose Your Own Adventure

his is the feature match with all the titles. Pick one. No matter which one you choose, the ending will be the same. This is the sort of inevitability that Ruud had to face. Enjoy it.

"This is the dumbest way I have ever lost a Game 1," remarked an incredulous Ruud Warmenhoven. 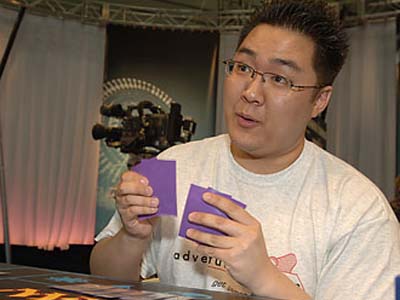 Ruud started Game 1 powerfully with Knight of the Holy Nimbus, who on turn three got given a boost with Griffin Guide. That he had Calciderm to help out pretty much made it the perfect White Weenie start. Unfortunately for him, even when he made a second Calciderm shortly after, the game was not all over. Across from Warmenhoven, Paul Cheon was building up mana with his red-blue deck, and drawing cards with an Aeon Chronicler who knocked Ruud down to 15 before sitting back on defence.

The issue for Ruud was Fortune Thief. Cheon was playing it maindeck in anticipation of White Weenie, and even had a Cancel ready to protect his when Ruud tried for Pentarch Paladin. The Paladin was soon hit by Extirpate, which allowed Cheon to get a good feeling for how many outs Ruud had without the Knight. As it turned out, there were none, but as the game had gone pretty quickly thus far, Ruud decided to wait things out a little, forcing Cheon to show some more cards and actually win Game 1.

All it took though was another Aeon Chronicler, and Vesuvan Shapeshifter to copy it. The game was over, but for the quotes.

"You realise that everyone watching this match is going to be rooting for me now, because I'm not playing Fortune Thief…"

All Cheon could do was nod and smile the smile of someone who is up a game at the Pro Tour.

"I feel like I'm due a cheesy win," remarked Warmenhoven, only for Cheon to mulligan. Twice.

For the second game, Ruud led with the trifecta of Shade of Trokair, Knight of the Holy Nimbus and Opal Guardian, while Cheon was mono-red, with only a Prismatic Lens as a concession to producing blue mana.

For turn four, Ruud rumbled in for 6 thanks to pumps on his Shade and suspended a second Shade. Sulfur Elemental came out for Cheon and succeeded in not killing anything while activating Ruud's Opal Guardian. The second, though, that killed everything but Ruud's Guardian, who got in in the air for 5. Ruud played Calciderm and passed. Cheon followed up with a morph, which met a growl from Ruud, who had been mumbling Fortune Thief every turn of the game like a man possessed.

Calciderm traded with Sulfur Elemental, and then the Thief turned up. Paul was at 2, but life totals seemed kind of irrelevant for him. His life was in the hands of a thief; a thief that was forcing the fastest game of "draw, go" that Ruud had ever played. He knew his outs, and just had to find them. Meanwhile, Paul was busy building up his board. Teferi, Mage of Zhalfir was pretty crucial, but there were no attacks to be had from Cheon, who faced down a bevy of big blockers. 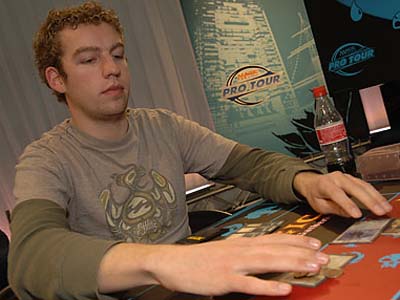 "I feel like I won both games, but I'm losing this match," laughed Ruud. Paul was cursing his inability to draw gas, only to find an Urza's factory. The attacking would come soon enough. Ruud went through the motions of getting Paul to 1 by attacking with a Serra Avenger. Paul had a Mystical Teachings to find Spell Burst.

"This is what Magic is all about. Losing to Fortune Thief." There was more from the laughing Warmenhoven, but it all came out as "wah wah wah."

"I think I'm in the full lock," declared Ruud. This didn't end the game, though, as it seemed that the Dutchie was having way too much fun decking his opponent.

"You think you're in control, but it's really a false sense of security."

Paul shrugged and played Bogardan Hellkite, and followed up with a Vesuvan Shapeshifter.

After a little more filibustering from Ruud, he finally extended his hand.