Round 7: Christian Lührs vs. Darwin Kastle 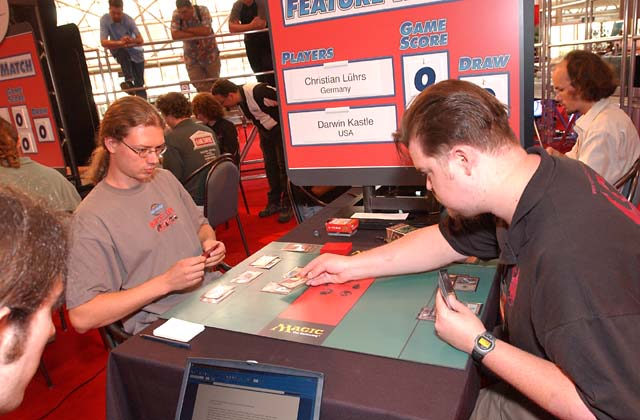 Darwin used Terminal Moraine at end of turn to get an island, then on his turn played a second swamp and a kicked-up Phyrexian Scuta. Christian said "Okay, let's go," and swung with his creatures, and the Scuta blocked Llanowar Dead. Gaea's Might turned that into a trade with the Scuta, and Christian then played a forest and Quirion Explorer. Darwin dropped another swamp and his Phyrexian Reaper, which was met by Tribal Flames, then the Quirion Explorer helped to put down a Sparkcaster, both for the mana and gating requirements. The Sparkcaster hit Darwin for a point before the Rager attacked again, dropping Darwin to ten life altogether. 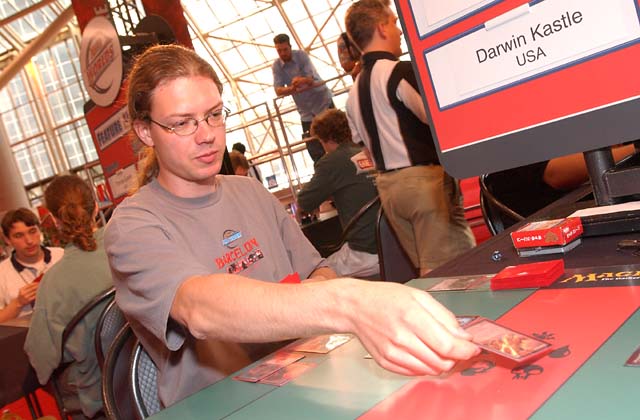 With a few threats facing him down and failing life totals, Darwin played a Tribal Flames on the Sparkcaster, and his Lord of the Undead, which is 'not bad' with the Phyrexian Scuta and Phyrexian Reaper in his graveyard. The Rager attacked relentlessly and offered the trade, knocking Darwin to eight life, but when the trade was refused Christian used his Terminate to destroy the threat, then replayed the Explorer. Darwin played a second island and a Stormscape Familiar, then Dodecapod. The Rager swung once again, not wanting to be slowed down by such miniscule things as 'blockers', and Dodecapod blocked, so Christian started with an Aggressive Urge, then took the trade. Christian then played a Stone Kavu, which was quite the threat considering how many mountains Christian controlled. Darwin had nothing on his turn, and his Familiar chumped the Kavu. He succumbed to the pumped Kavu on Christian's next turn.

Darwin started game two with a swamp again, and Christian played a forest and Ana Disciple. Darwin then played a mountain, and passed the turn. Christian's Disciple attacked for first blood, and Christian played another forest. Darwin played a swamp and Mournful Zombie, and Christian played a swamp of his own then attacked with the Disciple, which the Zombie did not block. Christian followed this up with a Phyrexian Rager, and Darwin played a second mountain and Tribal Flames killed the Rager. Ana Disciple attacked again, and Christian had Llanowar Dead following the attack. Darwin killed the Dead, well, you know, with Terminate, then untapped and attacked with his Zombie, following it up with a Coastal Drake, which was "not bad" against Christian. Ana Disciple attacked and before blockers were declared, Consume Strength eliminated the Drake and made the attack for three points, as if trading his Disciple for the Drake would have been a great tragedy. Ravenous Rats was played by Darwin following his next attack, and it was Christian's Rogue Kavu that got the axe for the team. Darwin played a Terminal Moraine and chose not to attack into the 1/1, while on Christian's next turn he found a mountain and cast his first red card, Kavu Aggressor. 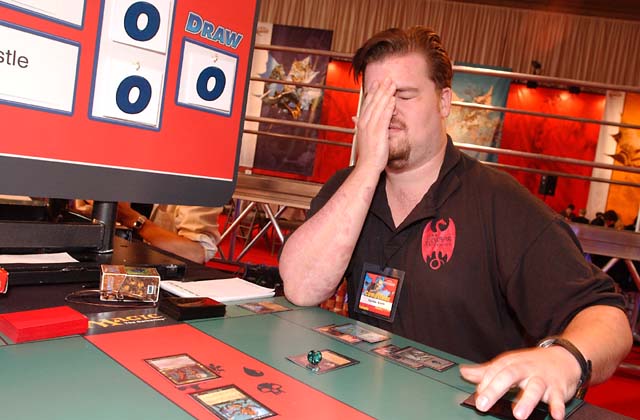 At the end of turn, Darwin pulled another island, and he had no play on his turn. Christian attacked with the Aggressor, and Ana Disciple's ability prevents Mournful Zombie from trading, so it gets through for three points uncontested. Christian cast a Yavimaya Barbarian but Darwin had his Suffocating Blast, countering the spell and destroying Ana Disciple. Darwin's Rats attacked for a point, then Darwin played Stormscape Familiar to increase his army. On Christian's next turn, Kavu Aggressor traded with the Zombie, and Christian cast Stone Kavu. Darwin used Malice on the creature and then attacked for two points, and again played his Lord of the Undead, though in this game it was not as impressive as the first time around. Tribal Flames took down the Lord, proving that he might as well be a Flagbearer, and Darwin's next attack brought Christian to eight life before Darwin kicked up his Phyrexian Scuta.

Christian played his Slingshot Goblin and Terminate destroyed the Scuta, and Darwin attacked with his 1/1's to drop Christian to six life. Christian untapped and killed the Familiar, then cast Volcano Imp, following it up with Horned Kavu, gating the tapped Goblin. Darwin once again had no play on his next turn except a land, and Christian then attacked his opponent for five, followed by replaying the Slingshot Goblin. Darwin played Vodalian Zombie, destined to keep Slingshot Goblin distracted for a turn, and used Cursed Flesh to neuter Christian's flier. Slingshot Goblin is in fact distracted, and Ravenous Rats became road kill while Darwin dropped to two life. Christian played Sparkcaster, dropping Darwin to one life, and faced with two different paths to victory his handful of Lands couldn't hope to fight off, Darwin offered the graceful concession in the face of the insurmountable.