Going into this final round of play for Day 1, a mere five players remain undefeated. Here sit two: Kamui Kaye from the United States, and Akimasa Yamamoto, the lone remaining Japanese player with a chance to end the day undefeated at home. 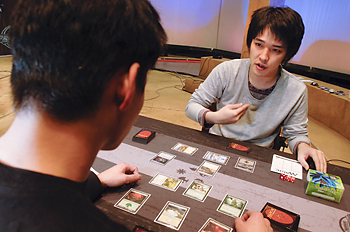 Who’s got a pointer finger and hasn’t lost a match all day? This guy—er, Akimasa Yamamoto.Kaye won the die roll and chose to go first, but he was forced to mulligan his opening draw. He grudgingly kept his second hand.

After seeing his opening of Wild Nacatl and Knight of the Skyward Eye, I wasn’t exactly sure why he seemed so resigned to his second hand. Yamamoto had a Darklit Gargoyle for his second turn, and followed that with an Armillary Sphere to match Kaye’s new Druid of the Anima. Kaye had managed to get both a Mountain and Plains into play, too, turning his Nacatl into a respectable 3/3, but he kept it home, not willing to risk losing it to Yamamoto’s Gargoyle. Instead, he chose to send in the Knight, which he had enough mana to pump. When Yamamoto predictably chose not to block, Kaye did just that, dropping Yamamoto to nine.

Yamamoto tapped out to play a Faerie Machinist on his turn. When he grabbed himself a Scourglass, Kaye had reason to frown. He had done a good job of getting Yamamoto down to 9, but he wasn’t going to be able to kill him before the Scourglass came online and wiped him out. When he attacked with his two beaters, though, Yamamoto decided to block both of Kaye’s creatures. Since they were both artifacts, thus impervious to the Scourglass, it became clear that something was up. Yamamoto untapped and activated his Sphere, grabbing a second Plains and Swamp, before playing the Swamp and clearing everything but the Nacatl with an Infest.

Kaye rebuilt with a Matca Rioters, though he was still without a fourth land. Yamamoto rebuilt his side, as well, and his Fatestitcher and Metallurgeon stood a good chance of shutting Kaye down without having to resort to the Scourglass. Unfortunately for Yamamoto, he had been under constant pressure since the start of the game, and was forced to block with his Metallurgeon before it became active just to stay alive. Kaye dropped him to three and played a Dragon Fodder for a couple more creatures. Yamamoto appeared calm as he untapped and played a Mirror-Sigil Sergeant.

On the next turn, there was a little discrepancy about the life totals, as Kaye thought his alpha strike for 2 was lethal, when it actually dropped Yamamoto to 1. He dropped a Bant Battlemage into play to replace the Wild Nacatl he just lost, and you know he had to be praying that he could find a source of blue to lift up an attacker. Any attacker.

Yamamoto started to exert his will on the next turn. His Sergeant created a copy, and he played an Etherium Sculptor and the Scourglass. All Kaye could do on his turn was to cycle a Yoked Plowbeast and pass the turn. Yamamoto’s two Sergeants doubled on his next turn, and he finally felt confident enough to attack. At this rate, Kaye only had two turns. The first of those turns got him a Rakeclaw Gargantuan, which wasn’t exactly going to get things done. Yamamoto’s stormtroopers crashed over and dropped Kaye to eight. Kaye was down to one draw step. When it wasn’t a blue source or a way to hit Yamamoto for one, Kaye collected his cards.

Both players reached for their sideboards during the break, but after some consideration, they both found nothing to bring in. They shuffled up in relative silence, with the only real words exchanged being a “No worries” from a smiling Kaye as Yamamoto presented his deck while Kaye was still pile-shuffling. Unfortunately for Kaye, the smile wouldn’t last long as he was forced to mulligan for the second straight game. When playing on a stage of this magnitude, giving up any advantage, even a single card, can just be a gut-wrenching experience.

Kaye seemed much happier with his hand this game than he had in the first, though it started out much slower. His first play was a third-turn Nacatl Outlander. The pro-blue kitty crashed right through Yamamoto’s Brackwater Elemental and was unfazed by his Fatestiticher. Unfortunately, it was also alone, as Kaye passed turns four and five without a second play. Yamamoto, on the other hand, kept the pressure up, adding a Windwright Mage to his team. A Nacatl Savage from Kaye finally joined the fray, but he couldn’t really stop the Mage unless the Fatestitcher allowed it, which seemed unlikely. Yamamoto sent his Brackwater Elemental over the temporarily clear table to hit Kaye for 4. After combat, he returned it with Call to Heel and replayed it. 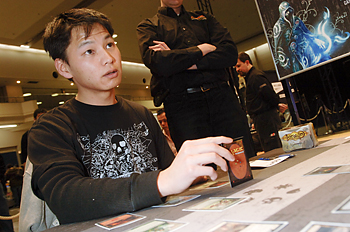 Kamui Kaye is also sitting on an unblemished record heading into the round.During Kaye’s upkeep, Yamamoto revealed his plan for the Fatestitcher and tapped down Kaye’s lone Mountain. That plan was quickly quashed by the appearance of a second Mountain. Yamamoto added a Darklit Gargoyle to his squad and passed the turn, this time choosing not to use the Fatestitcher on a land since he couldn’t deny Kaye a color. Instead, after Kaye had played a Druid of the Anima and passed the turn, he used the Fatestitcher to tap down the Nacatl Savage.

Yamamoto continued his assault, this time simply sending the Gargoyle over and activating it. After playing and sacrificing an Armillary Sphere on the following turn, though, he was able to add the Windwright Mage to the assault squad. Kaye bolstered his forces with a Rakeclaw Gargantuan and a Knight of the Skyward Eye, but Yamamoto’s Fatestitcher wreaked havoc on the red zone, as he is wont to do. After another assault from Yamamoto’s air force, Kaye was down to 8.

Kaye, needing to either get on the offensive himself or at least stop Yamamoto’s assault, sent all of his creatures but Nacatl Outlander to attack. Yamamoto chose not to tap any of Kaye’s creatures, instead holding it back for after combat. At a fairly high life total, Yamamoto had the luxury of being able to chump the Knight of the Skyward Eye with his Brackwater Elemental, forcing Kaye to pump it to keep it alive. The creatures that got through dropped him to 9, though he had plans to try and kill Kaye on his next turn. He cycled a Resounding Wave at the end of Kaye’s turn, returning Druid of the Anima and Rakeclaw Gargantuan to Kaye’s hand.

After drawing his cards, his plan appeared to have changed, as inevitability seemed to trump the desire to risk losing if he just unearthed the Brackwater Elemental and attacked into a burn spell. Instead, he just chose to play a Vedalken Outlander and a Sanctum Gargoyle. He decided to only attack with his two living fliers, dropping Kaye to 4 and setting him up for next turn. When Kaye drew his card and found nothing, his concession made sure that Yamamoto wouldn’t need his next turn.