Round 7: Dan Clegg vs. Mike Turian 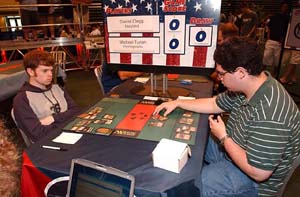 Pro Tour and Grand Prix Champion Mike Turianand constant left-of-spotlight finisher Dan Clegg had no need for small talk as they shuffled up their decks. They discussed instead the previous day's Standard, and how their respective decks (Clegg with blue-green madness and Turian with green-blue-red Opposition) mulliganed better than most. With a friendly handshake, the match was underway.

Turian mulliganed to start, but found six he liked a lot better. While Clegg opened with a pair of lands, Turian Insisted to smooth his draw, then hit for four with a Reckless Charged Woodland Druid. Clegg made a Shieldmage Advocate, getting ready to rule the combat phase. Turian Charged for four more while the getting was good. Clegg strengthened his position with Dirty Wererat.

Turian came back big with Phantom Centaur. The ground stalemated. Barbarian Lunatic was matched by Vigilant Sentry. It looked like the waiting game would last a while. Turian couldn't hold back a grin as he saw what was coming. Three mana gave him a very busty Arcane Teachings on his Centaur, turning it into an unkillable beast. He sent it into the Red Zone. Clegg chumped, and Turian went overtop with Sylvan Might. Clegg thanked his lucky stars he had Pay No Heed.

All the same, the next turn came too soon. Clegg hoped to buy time by blocking with Shieldmage Advocate and having it rescue itself. In response to the activation, Turian Sonic Seizured it, sending it to the graveyard.

The extra damage from the re-used Sylvan Might left Clegg at seven. He shrugged and sent Waste Away at the Lunatic. Still, he didn't have many options. Shade's Form gave him another turn, but when he saw Turian make Chainflinger, he just packed it in.

"Arcane Teachings is too good. Though right now I'm very happy with it." - Mike Turian

The second game got underway on the third turn, but it was really busy. Turian had Lithatog and Possessed Barbarian, but Clegg outclassed him with Nomad Decoy, Famished Ghoul and Carrion Wurm. Turian dropped Arcane Teachings on his 'Tog and boldly served with both. Clegg double-checked his life total, and decided it wasn't worth getting wrecked by Sylvan Might. Counterattacking for nine seemed pretty great. It was even better when Floating Shield took care of the Arcane Teachings and stuck around to threaten.

Turian realized just how bad things were, and started to chew on his pen in consternation. His Barbarian was locked down by the Decoy. He thought for a minute, then ran the Lithatog in for one. He pinned his hopes on Pardic Lancer. 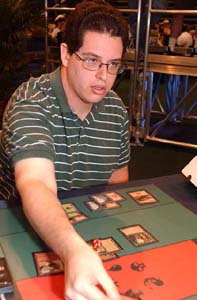 Clegg agonized over his next play. He decided to play it safe, swinging with just the Carrion Wurm, dropping Turian to five and passing it back. He was waiting on Waste Away. It dispatched Possessed Barbarian when it tried something funny. Clegg was content to bide his time, waiting for the moment when Floating Shield could serve up the win. He added Pilgrim of Virtue for a bit of a clock.

Just then, Tournament Organizer Jeff Donais barged into the Feature Match Area with reporters and photographers in tow. Donais was explaining how the Red Zone playmat worked, and using Clegg as an illustration. Clegg was having a hard enough time optimizing his line of play, and an extra pair of hands on his lands and creatures weren't helping things. Not to mention the barrage of extra dialogue about the game in question. And then Gary Wise showed up. This time, however, he was the voice of reason, and Clegg and Turian were able to resume their game in a more civilized atmosphere.

Turian built forces including Dwarven Scorcher and Chainflinger. Clegg tapped and chumped and though Turian had an army, he was also at four. Pro-red let Clegg dance through for the win. 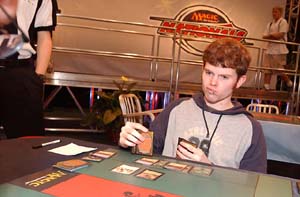 While shuffling for the deciding game, Turian hoped aloud "Maybe this game Woodland Druid will come out and smash!" Well, he got his wish, and it was joined by Dwarven Scorcher. Clegg for his part managed a Mesmeric Fiend, seeing Sonic Seizure and Pardic Arsonist, but taking Chainflinger.

And just as onlooker Aaron Forsythe was whispering to Ben "Superman" Rubin "What Turian needs here is for Clegg to miss it", Clegg drew a card and passed it right back. Crackling Club off the top freed the Chainflinger as if to show Clegg how to draw lucky. He found a third land and made a Vigilant Sentry.

But Turian didn't have any time for something that wasn't a clubbering. He Petravarked away Clegg's only swamp and took out the Sentry with Sonic Seizure. From there it was two short turns to victory.