Round 7: Darwin Kastle vs. Brian Davis 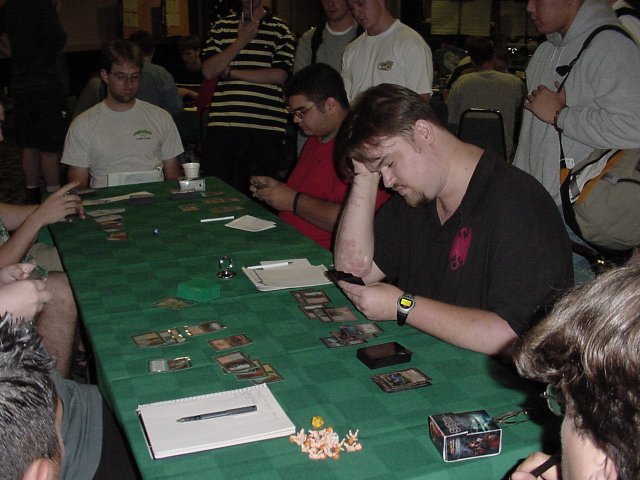 If there is a word to describe the battle of these two titans, it would be ... consistent. Consistency is a wonderful trait, especially among magic players, but it can also mean rigid and unchanging. At this point in the tourney, both Kastle and Davis are 4-0-2, and none of those draws are intentional on either side. Kastle is running his U/B/R control deck, using a mix of Undermines and kicked Urza's Rages as the kill mechanism. Davis is piloting the very popular U/R/W control deck, using Goblin Trenches as the kill mechanism. It means that numerous cards (such as Excludes and Repulses) will be dead on both sides, and that it really comes down to control decks that really only have 4 counterspells, Undermines for Kastle and Absorbs for Davis. This basically means that neither deck truly has "control" instead it becomes a battle for card advantage. Kastle packs Lobotomy, Void and Yawgmoth's Agenda, in addition to the standard brace of Fact or Fictions. Davis has Prophetic Bolts, Opts and far too much creature control, making the initial match-up heavily in Kastle's favor.

Davis and Kastle have faced each other twice before, once in Tokyo, where it was a win for Davis and once in Chicago, where they played it out to time without a winner. With both men playing it out for this final round of day 1, a draw really gains them nothing. Kastle and Davis might make day 2 based on tie breaks with a 4-0-3, but this is very, very chancy.

Kastle kicks it off, getting a Fact or Fiction to resolve on turn 5 and another a couple of turns later. I feel obliged to point out that resolving those two Fact or Fictions, and having nothing but land played on both sides, took them to the 30 minute mark. Obviously neither player wishes to make a mistake, but this consistency would come back to haunt them. A few turns later Kastle drops the "bomb" in this match-up, Yawgmoth's Agenda. He has a Rage in the boneyard (via an earlier FoF) and another in hand, and Davis is forced to scoop as he cannot deal enough damage to put Kastle down before he is hit by an angry freaking Urza, not once, but twice.

They end game one with less than 15 minutes to go. 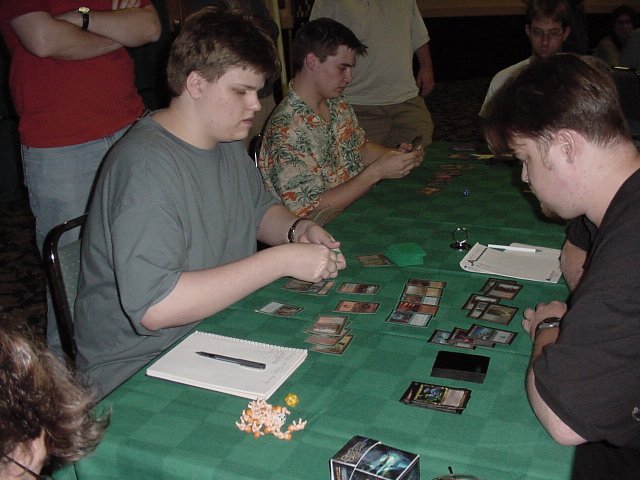 Davis switches to the beatdown audible from his sideboard, bringing in an array of small creatures and mana acceleration in the form of Sunscape Familiar! He breaks out in the second, playing first he brings out turns 2 and 3 Familiars, and fires off Prophetic Bolts like they were Impulses and Lightning Angels like they were... well Radiant Kavus? You really can't make them a whole lot faster. Kastle had boarded out most of his creature control, and he was rapidly overwhelmed.

Game Three begins with six minutes on the clock! It's crunch time.

Kastle has swung back into a standard creature control package, knowing that his tiebreakers are slightly higher than Davis, so a draw benefits him more (although neither really wants it) and this will force Davis to keep his speedy package in if he wants a hope of winning. (Kicked Urza's Rages have a great number of things going for them, but being a speedy kill mechanism when the clock is ticking is not one of them). Kastle actually brought in his Emblazoned Golems, just to give himself a possible win. Unlike the second game, Davis was unable to break out of the blocks quickly, and it appeared that Darwin had the game locked up. He would have, barring the Obliterate from Davis on turn 8. This seemed an odd choice, since if it was cast it literally meant neither would have time to finish the game. Sure enough, Kastle FoF'ed in response to the Obliterate and by the time it resolved, time had been called. 5 extra turns would not be anywhere near enough to finish it.

(After this was written final standings were posted and Darwin Kastle is indeed going on to day 2, while Brian will probably be money drafting)