Round 7: Darwin Kastle vs. Matthew Vienneau 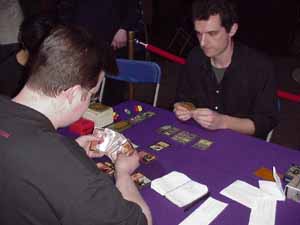 To the recollection of both players, Kastle and Vienneau have only played each other just once. That once was a whopping seven years ago during the Swiss rounds of Pro Tour Atlanta, where Kastle was the only person to defeat Vienneau during the Swiss rounds. Part of that was because Vienneau made mistakes a-plenty, probably giving Kastle the impression that Vienneau was a horrible player. The fact that both Kastle and Vienneau made the Top 8 playoffs of that Pro Tour has done nothing to change Kastle’s opinion, and Kastle still maintains that viewpoint even today.

Ever the fun-loving guy, Vienneau demonstrated his own, unique way of determining who plays or draws first. Revealing a set of six dice- three with positive values, three with negative ones. Rolling all six granted Vienneau the choice to play or draw.

While waiting for the round to begin, Vienneau was like a fountain of words. Let’s just say that opening remarks involved subjects that as pretty much typical of something one would expect out of Vienneau. When Kastle questioned Vienneau about what happened to his rating, the once-Grand Prix champion simply replied, “I started dating women. Not just one woman, but many women.”

Apparently, it also seems that Vienneau was willing to share his latest escapades on the dating scene with the public- evidently one of his girlfriends actually did an Internet search for his name. While very sweet and potentially romantic, I don’t think she received the best of impressions when the search turned up David Price’s Invitational report and some less-than-factual accounts from unsavory humor sites.

Pre-game conversation then went through various dips and turns, across subjects that included roommates, Magic Online, fiction-writing, among others. After the judges finished sorting out some messes in the main playing area, it was finally time for the round to begin after the obligatory handshake and “Good Lucks” from both sides.

The opening looked like a battle of monoblack against monored. Vienneau on the dark side. Woodland Foothills fetched a forest to accompany Vienneau’s two swamps, bringing out Wirewood Savage. Kastle drew an accompanying plains for his pair of mountains, and played a morph. Then, like just about every game that started with a third turn Wirewood Savage, the card drawing began with a Leery Fogbeast from Vienneau. Kastle sent his morph in, and with two mountains open, Vienneau wonder whether the morph was either the Skirk Commando or the Battering Craghorn. After some thought, he bit, and blocked the morph with his Fogbeast. The morph died to reveal the Commando. 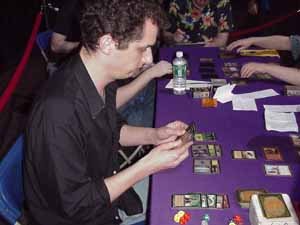 Goblin Clearcutter entered play on Kastle’s side, while Vienneau cycled a Krosan Tusker to fetch himself a fifth land. When Vienneau made an attempt at a second Beast, a Prowling Pangolin, Kastle Shocked the Wirewood Savage in response, denying Vienneau the draw, then lapsed deep into thought, debating what to do with the Pangolin. In the end, he decided to lose both his creatures to kill the 6/5 off.

Gustcloak Harrier put a clock back in the board, but was outclassed by a Timberwatch Elf-backed morph from Vienneau. Kastle tried to remain on equal terms with his own morph, but his land-locked position didn’t help out much. When Vienneau attacked and his morph went unblocked, he flipped it over to reveal Haunted Cadaver, ripping three spells out of Kastle’s hand. Vienneau then made a replacement morph. Surprisingly, Vienneau refused to attack, possibly signaling a Spitting Gourna as his morph. Kastle didn’t call the bluff and held back, instead opting to add a Battlefield Medic to his side of the board, which was dealt in timely fashion by a Crown of Suspicion. Then, Vienneau revealed his morph- not Spitting Gourna, but Venomspout Brackus. When Vienneau played a Smokespew Invoker with many, many lands in play, Kastle was forced to off it with a Pinpoint Avalanche. Vienneau simply shrugged it off with an Aphetto Dredging for three of his beasts.

Vienneau: “I have a four point card advantage, while you have a ten point life advantage.”
Kastle: “True, true.”

The Prowling Pangolin was the first beast to re-enter play, and this time, it stuck. Kastle’s response to that was a Grassland Crusader, but that seemed unlikely to contain the beasts on the wrong end of the table. Both of Vienneau’s beasts swung. Kastle fell to seven. Krosan Tusker hit the table. Could this seem any bleaker?

If there was any saving grace, at least with the Brackus tapped, Kastle’s Gustcloak Harrier was free to reduce Vienneau’s life total by a grand total of two points, but by now, the board had really fallen out of Kastle’s control. Vienneau swung with all three revived beasts, but Kastle wasn’t fully out of tricks yet. As a final, last-ditch effort, Kastle cast Inspirit, untapping his Gustcloak Harrier. That, coupled with the Grassland Crusader in play pumped the Harrier to 6/8, which was enough to kill the Brackus. Unfortunately for Kastle, Vienneau pumped up his Krosan Tusker with his Timberwatch Elf, then cast Run Wild, giving just enough trample damage to win the game.

It is interesting to note that after game one, Kastle made no attempt to disguise the fact that he was sideboarding many, many cards. Too many, in fact. It was fairly obvious to Vienneau that Kastle was potentially switching colours around, but all he could do was wait and see.

Both players opened up with turn-two plays- Kastle with Battlefield Medic, Vienneau with Wirewood Elf. Vienneau’s play was more impressive, since it fuelled a third-turn Symbiotic Elf. Kastle only had a Blade Sliver to contend with. Kastle added a morph to his force, which was enough to convince Vienneau to hold back. Still, with five mana untapped and five cards in hand, something was afoot.

“I have a bad feeling about this whole ‘go ahead’ stuff.” – Darwin Kastle

Despite the fact that Kastle didn’t like this “go ahead stuff”, he too, resigned himself to those same two words. The board was locked. Neither player wanted to make a move for fear of what the other held in store. This style of “draw-go” went on for another few more turns, until Vienneau hit seven lands. Unfortunately for Kastle, Vienneau’s deck is a little bit more adept at using many lands, and Vienneau’s addition of Krosan Tusker demonstrated that painful fact. An Akroma’s Devoted from Kastle paled in comparison. 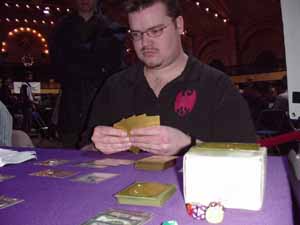 The Tusker entered the red zone. Vienneau still had five cards in hand and had seven mana available to him. Muttering the words, “This could get real ugly,” Kastle gave in, and triple blocked the incoming Tusker with his Blade Sliver, his Akroma’s Devoted, and his face-down creature. Sure enough, Vienneau was not without tricks. Cruel Revival removed the Blade Sliver before combat damage, and all six points of Tusker power went into the Akroma’s Devoted, to stop the Battlefield Medic from saving it. Kastle then added a Gustcloak Harrier to his side of the board. The Tusker attacked again.

“Triple block again,” came the announcement, bringing out some signs of surprise out of Vienneau. Run Wild saved the Tusker, and then Smokespew Invoker came into play on Vienneau’s side.

Thankfully, Kastle held a great answer for the problem- Akroma’s Vengeance. However, it appears that Vienneau was aware that Kastle had the said Vengeance in his deck, and had wisely kept creatures behind in case of such an event. Wirewood Savage and a morph came down, accompanying the two Insect tokens that came from the Symbiotic Elf. Grassland Crusader came from Kastle, and then Vienneau swung. The morph hit, and was flipped over to reveal Haunted Cadaver, ripping the Crowd Favourites out of Kastle’s hand, much to his displeasure.

Then Visara hit the table.

With absolute ownage going on just one half of the table, it really didn’t take much for Vienneau to finish mopping the floor with what a very defeated Kastle had left. Prowling Pangolin really was just rubbing salt into things.