Round 7: Darwin Kastle vs. William Jensen 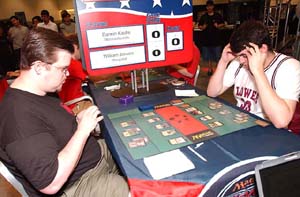 Darwin Kastle wouldn't deny that limited isn't his strong suit. With Top 8's this season in both Extended and Block Constructed, it's clear that he's more at home with sixty card decks than forty. The smaller stacks are no trouble for William "Huey" Jensen, who Top 8'd Chicago's Rochester Draft Pro Tour. Of course, his Top 4 at Venice was none too shabby either. Strangely, both these two giants are sitting at 3-3, needing to win out to have a shot at the Top 8.

The two players started with two drops, Jensen with Shepherd of Rot and Kastle with Stonewood Invoker. Jensen could only shake his head as he sent it back to Kastle without playing a creature on his third turn. Kastle mused aloud about the possibility of Primal Boost, but attacked anyway. Jensen let it through. Kastle dropped Wirewood Savage and passed it back. Jensen made himself an amplified Brawler, showing Vengeful Dead. Kastle missed his fourth land, but had Timberwatch Elf ready. Jensen played the Dead. Kastle played Krosan Warchief and drew a card, finally finding his fourth land. He held back. Jensen activated his Shepherd for four.

Jensen chuckled and played a morph. Kastle came down with Berserk Murlodont and drew a card, but still didn't swing. Jensen drained them both again. He made no play on seven lands. Finally Kastle swung, sending the Murlodont. Jensen blocked with Embalmed Brawler, losing a life. Kastle regenerated his guy, and Jensen tapped his Shepherd before damage resolved. Then Kastle took one from the Dead. The life totals were four to two. Jensen flipped up Infernal Caretaker to get back the Brawler and get ready for the draw. He played it and swung in with a shrug.

"I think I can't do any better than a draw, so I better make sure I don't lose." – Darwin Kastle

The word "lose" was even in little air-quotes. Kastle blocked sanely, and Jensen drew the game.

"That was fun. Maybe I can get like seven draws and set a record." – William Jensen

Jensen started the second game with Shepherd of Rot followed by Severed Legion, a pretty brutal clock. Kastle's first play was a too-slow Timberwatch Elf, and Jensen played a face-up Skinthinner, stuck on three lands. Luckily for Kastle he had the Screeching Buzzard to get in the way of the Legion.

Jensen dashed his hopes with a fourth land and Undead Warchief. The Skinthinner and Legion smashed in. Kastle traded his Buzzard for the Legion, but with the Shepherd activation Kastle was down to just five. He played his fifth land and sent it back to Jensen. He played a Brawler and bashed in. 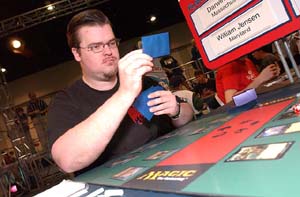 Kastle had Caller of the Claw at instant speed, and put it in front of the Skinthinner, then Timberwatch on the Warchief. It pumped itself, but it didn't matter, as Jensen had Vitality Charm to trample over the Caller. Kastle had Wirewood Pride to make it close, but the Shepherd plus one trample was enough.

Kastle double mulliganed unacceptable hands and then stood on five cards. Jensen didn't betray how good things were looking for him. Kastle's Carrion Feeder showed up to the party a turn late. Jensen passed his turn without a play.

Kastle's double-mull was kind, and he had a Krosan Warchief on his third turn. Jensen made a morph and accepted two damage. Kastle followed up with Smokespew Invoker. Jensen held his ground and played a second morph. Kastle hit for five with his Invoker and Warchief, and Jensen took it, falling to twelve. Kastle played a Stonewood Invoker.

Jensen put out his fifth land and passed it back, fronting Skinthinner. Kastle cycled Gempalm Polluter to put him to ten, then untapped and swung with three dudes. Jensen's morph blocked the Invoker, and flipped up as Skinthinner to take down the Warchief. Kastle remembered to eat both guys.

Jensen tried to put up his defenses. He played a Brawler showing Polluter, and a morph. Kastle swung in with his men and five mana open. Jensen thought, and then triple-blocked the Feeder. The Feeder traded with one of the morphs (a Spitting Gourna), and then Kastle showed his Caller.

"Yeah, pretty much the only way around Caller of the Claw was the block you made." – Darwin Kastle. 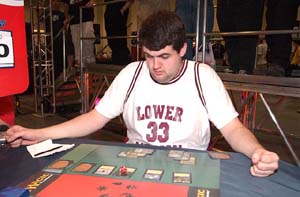 Jensen played another land and his Polluter. Kastle answered with Bladewing's Thrall. Jensen made no play. Kastle found his eighth land for his Invoker and played it slow, assassinating Jensen's team. Jensen played still more land. When Kastle finally dropped Skinthinner and unmorphed it, leaving Jensen with no board, he was willing to commit to an attack. Jensen dropped a hand of all land on the table. He'd drawn only four spells that game.

Jensen started what was hopefully the deciding game with Shepherd of Rot.

Kastle came back with Stonewood Invoker, but Jensen had Embalmed Brawler showing Undead Warchief, promising bad times ahead. Worse, Kastle had no play on his third turn. The Warchief came down and the Brawler hit Kastle for five. He returned fire for two and played Bladewing's Thrall.

Jensen untapped, surveyed his options, and then played Shepherd of Rot before swinging with his three other creatures. None of Kastle's blocks appealed to him. He traded with the Warchief and fell to just one. He untapped, drew, and conceded.

It was an utter beating.