Round 7: Dave Williams vs. Rob Dougherty 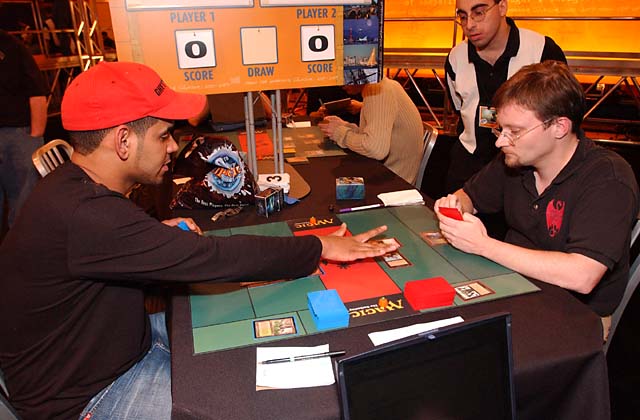 Entomb or no, Rob Dougherty can't be pried away from Reanimator in Extended. You can't fault him for it, seeing as how the deck has brought plenty of success, including a finalist appearance at last year's Extended Pro Tour in Houston. In lieu of the banned Entomb, Dougherty is playing Putrid Imp. Laughable, yes, but it allows for second turn Akromas. Williams is playing the Food Chain Goblin deck, that has plenty of pure aggression and an ability to "go off" as well.

Williams- "What in the...?!?!"
Dougherty- "I'll tell you what I've told everyone else, I lost a bet. But hey, have you tested against first turn Putrid Imp?"

Williams played Mox Diamond and a Chrome Mox, then a Goblin Piledriver. Dougherty discarded Akroma to the Imp and Reanimated it, then attacked with the Angel and the Imp for seven damage. Williams couldn't find the Food Chain he needed to go off, and conceded. 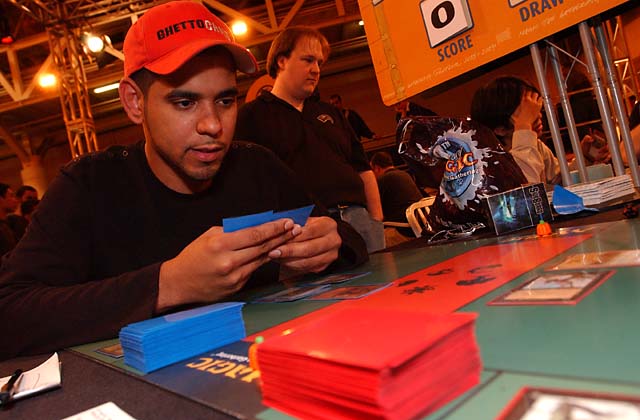 Williams started with Chrome Mox, mountain, and Goblin Recruiter, then set up an army on top of his library. Goblin Warchief came out and attacked along with the Recruiter for three damage, and Dougherty cast Wordly Tutor on end step to get Akroma. The dreaded Putrid Imp came out on turn two, but Dougherty had no other play. The Goblins continued to gain numbers with a second Warchief and Mogg Fanatic, and they all headed for the Red Zone.

Dougherty cast Vampiric Tutor, then chump blocked the Warchief with the Imp. Sickening Dreams for two wiped all of Williams' creatures off the board and put Akroma in the graveyard, but brought Dougherty down to four life. Williams came back with a Piledriver, and Dougherty cast Exhume to get Akroma, but this brought him to three, where one last attack was able to finish him off easily. 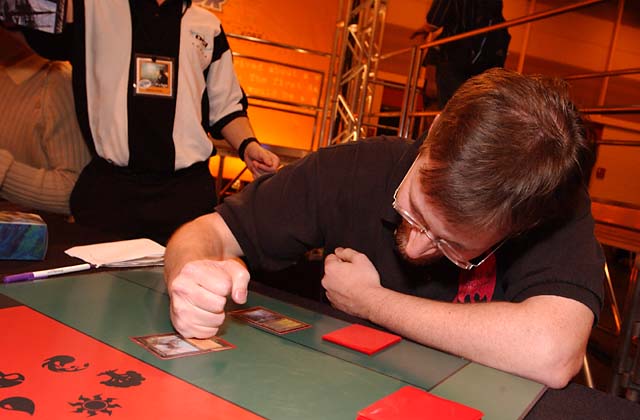 Dougherty had a first turn Tarnished Citadel, and Williams played Mogg Fanatic, then a Piledriver on turn two. Vampiric Tutor on end step was followed by Engineered Plague on Goblins, and Williams played a Ringleader, which got him a Prospector and a Recruiter. Despite the Plague, the two Goblins still dealt three damage when they attacked. Cabal Therapy took the Recruiter out of Williams' hand, leaving the Prospector, Mogg Fanatic and a Warchief.

The Warchief was summoned and attacked with the rest of the team, dealing six damage total to bring Dougherty to four life points. Putrid Imp blocked and traded with the Piledriver, and a Recruiter came out and died immediately, but the search effect still triggered. With no answers left, Dougherty conceded.