Round 7: David Sonnenberg vs. Jeff Fung 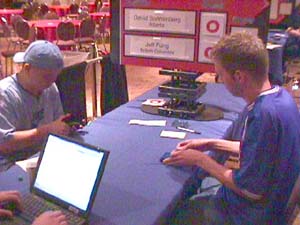 Jeff Fung "called the audible" for yesterday's constructed portion, switching to the Miss America deck at the last minute. He was handsomely rewarded for his decision with a 5-1 record.

Fung's one loss was to amateur David Sonnenberg from Alberta. Sonnenberg and his red/green deck beat Fung "like a silly little girl" despite getting a game loss for presenting a 50-card deck. Fung vowed revenge in the draft portion.

Sonnenberg, playing the coveted blue/green color combination, started off with a turn-2 Cephalid Scout. Fung had a 1/1 of his own, Mesmeric Fiend, which showed Sonnenberg to be holding the less-than-stellar hand of Krosan Constrictor, Nullmage Advocate, Ghostly Wings, and two land. Fung stole the Constrictor.

Sonnenberg put out the 2/3 Advocate on three and a freshly-drawn Hydromorph Guardian on turn 4. Fung, putting out a Forest and a Mountain to go with his Swamps, played a Gravegouger and a Krosan Archer to bring the attack step to a temporary halt.

Sonnenberg put the "little Embrace" – Ghostly Wings – on his Advocate, making it a flying 3/4 and attacked past the Archer. Fung played an Earsplitting Rats and discarded one of his two Refreshes, and Sonnenberg discarded an Island, leaving him with no cards. His Cephalid Scout upgraded a land at the end of the turn, however, and he put out the 3/2 Balshan Griffin on his next turn. 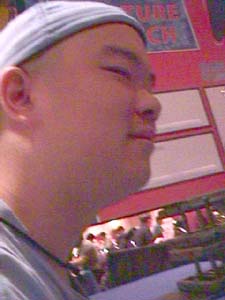 Fung put out a Nullmage Advocate of his own and was sneaking in points where he could, but he was on the wrong end of the race. Sonnenberg made life difficult for Fung by putting a Stupefying Touch on the Krosan Archer, preventing it from pumping on defense. Fung chose no to activate it in response with his last card, and with Fung's Advocate still sick, Sonnenberg figured it was safe to attack with his Griffin. Fung wouldn't block, would he?

Fung did indeed block, as his last card in had was a Refresh. Sonnenberg was quite deflated, as the card he had to pitch to save his Griffin was Breakthrough, which is about the best card ever with five lands in play and an empty hand.

Fung attacked with all of his creatures on his next turn, forcing Sonnenberg to make a few trades and fall to 8 life. Sonnenberg might have been able to regroup had Fung not dropped Guiltfeeder – an unblockable five points per turn as that game stood.

Two hits from Guiltfeeder ended it. Sonnenberg's deck has very few answers to the 'Feeder.

Sonnenberg started off with the big-bodied Nullmage Advocate on turn three, and Fung "countered" with a Nantuko Tracer. A turn late, perhaps.

Sonnenberg swung in, and then upgraded the Advocate into a ¾ flying Wormfang Drake. Fung attacked with his Tracer fearlessly, and Sonnenberg didn't bite. All Fung could add to the table was a Cabal Trainee.

Sonnenberg turned up the heat with an Ironshell Beetle (juicing up the Drake) and a Skywing Aven. Fung traded his Trainee for the Beetle and finally put out a real threat, Phantom Centaur.

Sonnenberg attack with just his Drake, taking Fung to 10, and strangely left the Aven back, effectively giving Fung an extra turn. He then put out a Balshan Griffin.

Fung attacked with the Tracer and the Centaur, and Sonnenberg blocked the Centaur with his Aven, trading a Forest from his hand and a bit of tempo for one Phantom Counter. Fung then offed the Griffin with Patriarch's Desire.

Sonnenberg didn't put his Aven back out, and instead took the Centaur beats and held back for a Syncopate on Fung's Elephant Ambush. The extra turn Sonnenberg gave Fung could have come back to haunt him; if Fung drew Firebolt on the last turn, Sonnenberg would have lost. As it happened, however, Fung fell to the 4/5 Drake. 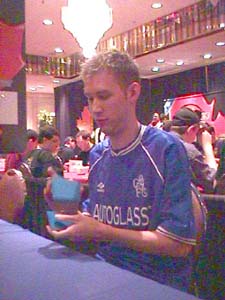 Fung got to play first in Game 3, and started the beats with a turn-2 Tracer and a turn-3 Gravegouger. Sonnenberg put out a Hydromorph Guardian, but Fung had Refresh at the ready when Sonnenberg blocked, then added a Treacherous Werewolf to his side.

Sonnenberg put out a Krosan Constrictor and an Anurid Scavenger, both problems for Fung's black team. With only the Hydromorph in his graveyard, however, Sonnenberg was going to have to work hard to keep the Anurid around. Fung played his Faceless Butcher on the Constrictor and sat tight, hoping to wait the Anurid out.

Sonnenberg did nothing on his sixth turn, and his graveyard was empty. The only way he could upkeep the Scavenger was if he had an instant, and the only one Fung saw to date was Syncopate. Fung oddly played into it by casting a Cartographer, which Sonnenberg Syncopated, allowing him to upkeep his Anurid and play a Balshan Griffin.

Fung put out his Nullmage Advocate, and Sonnenberg found a way to keep the Anurid around for another turn with and end-of-turn Serene Sunset. Sonnenberg attacked Fung for three and put out an Aquamoeba which would allow him to discard to upkeep the Anurid Scavenger as long as necessary.

Fung couldn't wait forever and attacked with his Werewolf, Tracer, Gravegouger, and Advocate. The Scavenger ate the Werewolf and the Aquamoeba flipped to take down the Advocate, but Sonnenberg fell to 8. Fung then put out the big boy, Phantom Centaur.

Sonnenberg drew a card and stared at it.

Sonnenberg the cast the card he was holding, which was not a Forest, but instead a card with considerable text – Flash of Insight. The three cards he looked at gave him nothing useful, and Fung started drawing bombs – Nantuko Disciple and Chainer's Edict. Sonnenberg couldn't keep up and fell in two turns.