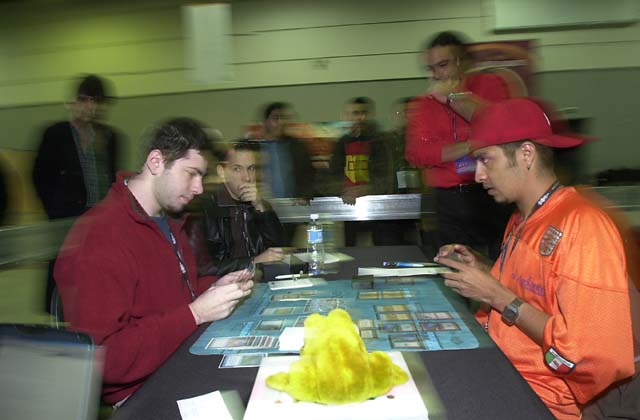 Gerardo participated in the Magic Invitational last year, and as a result is probably the most well known Latin American player in the world. He is a former Mexican National team member, and placed in the Top 8 of this tournament last year. Diego is the current Argentina National Champion, and is looking to defeat Gerardo on his home turf. With both competitors at 6-0, this match is quite important, and will go a long way in determining who gets to play in tomorrow's Top 8.

Diego played first this game, playing an island, while Gerardo did the same. A Spiketail Hatchling was summoned by Diego on the following turn. Gerardo then played a Plains, and cast Tsabo's Web. The Hatchling attacked, and with Gerardo tapped out, a Chimeric Idol resolved without any problems. Diego continued to apply pressure with an Opposition, which resolved. Only the Idol attacked, and the Hatchling stayed back to be used on Gerardo's upkeep. However, Gerardo had the answer for the Idol on Dismantling Blow, which Diego countered with alternate casting cost Foil. The Hatchling tapped down one of Gerardo's lands on upkeep, and it was tapped for mana to play Accumulated Knowledge.

Diego went about the business of replaying mana sources, and continued to attack with the Idol, leaving the Hatchling back to Port down Gerardo. A Story Circle showed up Gerardo's side of the table on the next turn, but an answer for the Idol was still necessary to survive, and time was running out with every attack. Fact or Fiction was played by Gerardo during his main phase, which drew him into a Dismantling Blow. With Gerardo tapped out, Diego saw his opening and played Static Orb to complete the lock. Gerardo responded with Foil, and Diego added Foil to the stack, which allowed the Orb to resolve. 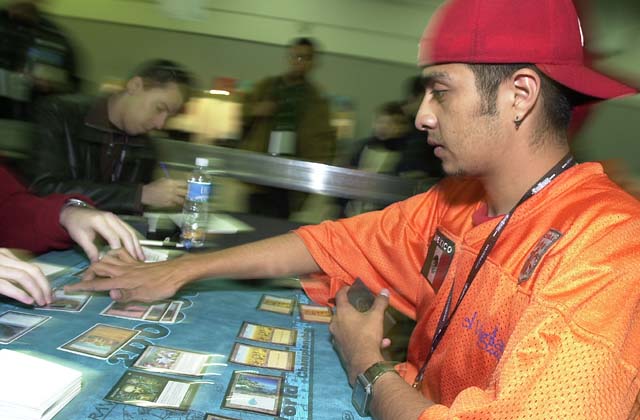 On the following upkeep, the Hatchling tapped down one of Gerardo's lands, and after playing another, he was up to three untapped mana sources. The Idol continued its attack, and Gerardo untapped more lands. The Orb/Opposition lock on the table was far less threatening than usual due to the fact that only two creatures were out, and one of them was being used to deal damage. With Diego's lands all tapped, Gerardo played Dismantling Blow to finally kill off the Idol that had been attacking for so long.

Diego added some pressure with Ribbon Snake, which gave him a desperately needed second creature to use with Opposition. Gerardo thought for a bit, and played Last Breath on the Hatchling, bringing Diego back to having only one creature in play. Still, this left Gerardo all tapped out, and Diego played a Merfolk Looter. Diego was in a tough situation. He had to keep Gerardo starved for mana, but at the same time he needed to actually deal lethal damage. Plus, there was the issue of tapping the Orb on end step when Diego wanted to have all his mana available.

After a few turns, Diego played a Thieving Magpie, which Gerardo Counterspelled. However, Diego was waiting with Misdirection, which allowed the Magpie to resolve. This gave Diego a crucial third creature, which would allow him to tap down the permanents Gerardo untapped, and to tap his Orb on end step. However, Gerardo had a window of opportunity with Diego tapped out, and he used it to play Wrath of God, which resolved, but left him entirely tapped out. 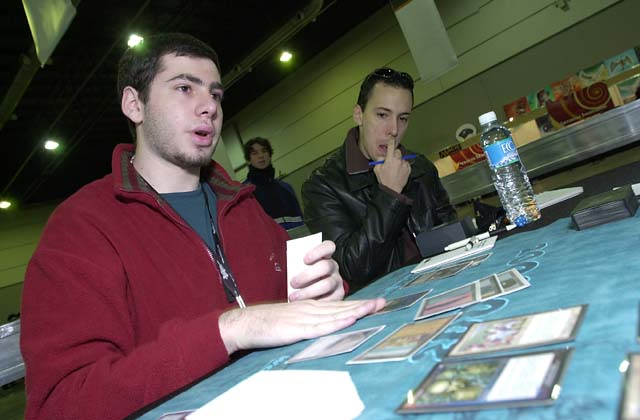 Diego started to rebuild on the next turn with Spiketail Hatchling, which tapped down lands on upkeep. A Thieving Magpie was summoned a few turns later, which Gerardo Counterspelled. Still, this forced him to tap mana. Diego continued to play threats when he played Glacial Wall, which resolved. He now had two creatures, which would increase the pressure of the lock. He used them to tap down all of Gerardo's available white mana (to dodge Absorb), and summoned Ribbon Snake, which resolved. Facing a lock with only thirty minutes left on the clock, Gerardo conceded.

Gerardo played first this time, but had to mulligan his opening hand. He played a second turn Millstone, which snuck by any potential counterspells. Diego had his own turn-two play: Spiketail Hatchling. A second one was summoned on the following turn, but it was eliminated with Last Breath. Diego was now stuck at three lands, but continued to play threats. A third Spiketail Hatchling was played, and it resolved, while Gerardo's Millstone went to work on end step. 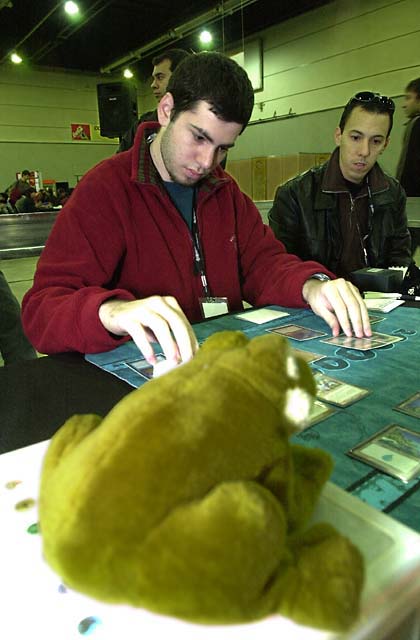 Gerardo now played Fact or Fiction in main phase, and the piles were separated into Counterspell/Island and Accumulated Knowledge/Dismantling Blow/Island. Gerardo took the three card pile. With Gerardo tapped out, Diego was able to summon a Stronghold Zeppelin without any problems. Gerardo went ahead and cast the inevitable Wrath of God on the following turn, and Diego was waiting with alternate casting cost Thwart. Gerardo added alternate casting cost Foil to the stack, but Diego responded with his own Foil, which resulted in the Wrath being countered.

Diego's creatures continued to attack, and Gerardo only had one card in his hand. It was a Dismantling Blow, and in a sign of desperation he used it to kill off his own Millstone in an attempt to draw into an answer. A Fact or Fiction was played during the next main phase, and Diego put the piles into four and one, with Accumulated Knowledge by itself. Gerardo took the Knowledge and hoped to draw into an answer such as Wrath of God, but could not find one.