Round 7: Diego Ostrovich vs. Carlos Romão 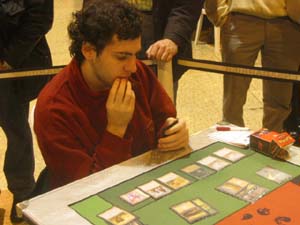 Diego Ostrovich and his many 'healers.'Anyone who needed any extra proof that South American Magic players can hold their own against anyone in the world needs only to look at this round seven of Grand Prix Sevilla. Diego Ostrovich and Carlos Romão are 6-0. Playing on table one. They crossed the Atlantic - heck, they crossed the Equator - to bring their game to Europe. And they are again proving how good they are this weekend.

With this the Argentinean clogged up the ground. Or tried to, because Carlos Romão was not about to be outdone. He played Wellwisher to get some extra life a real problem: Centaur Glade. The centaurs piled on until Romão reached eight mana. Then, instead of creating two tokens he played Scion of Darkness.

The platoon of "healers" messed up the combat math to such an extent that the Brazilian spent several minutes trying to puzzle his way into the Red Zone. The Whipgrass Entangler was helping at all. Finally he decided it was too early and played two extra elves: Wirewood Savage and Wirewood Herald.

After a mere three minutes of deep thought Diego Ostrovich sent two flyers in, dropping Carlos to seven in the process. Carlos tried to retaliate but the Entangler kept his Scion away and the best he could do was get his Herald killed to fetch Patron of the Wild. With his opponent's creatures mostly tapped out and a vital point of damage dealt to the Entangler the Brazilian then proceeded to drop a gigantic elbow: Infest. 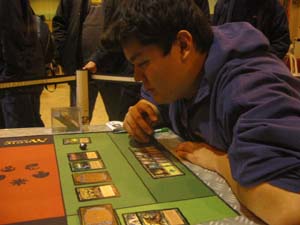 Carlos Romão just hardcasted his Scion of DarknessWhen the dust cleared there were three Centaur tokens, the Scion and the Glade facing two Argentinean creatures. One draw phase later Diego Ostrovich accepted the evident: this game was over.

Again the Argentinean set to the task of buiding his immense wall of white damage preventing creatures. Romão did his best to thin them down with Skirk Marauder but eventually had to resign himself to play Needleshot Gourna to stop the flyers and sitting behind it.

He followed that with Nantuko Husk but Ostrovich answered in kind with Havoc Demon. Still the table was locked and they had to maneuver the game into a way out of it. On Diego's side we had the Demon, Entangler, Vile Deacon and several Clerics. Carlos had Wirewood Savage, Screeching Buzzard, Nantuko Husk and Needleshot Gourna.

For several turns, and a large amount of minutes, they were able to little other than add small pieces to this puzzle. Romão played a couple of small creatures. Finally Ostrovich decided to probe by playing Chainof Smog getting a second Crypt Sliver and the infamous Infest. Still, Romão kept a card in hand. Several turns later.

The Entangler tried to keep Krosan Vorine out of the Red Zone but Carlos Romão paid a hefty ten mana to kill the Entangler. This turn in the game coincided with the end of the Budde-Barrado Feature Match which meant most of the Spanish crowded left the area. 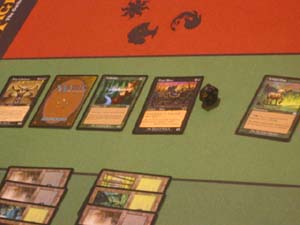 All of this almost not enough. Infest had to save the day.In came the Scion of Darkness once again. On and on, Carlos Romão piled creature after creature setting up for a massive alpha strike. Ostrovich found an answer for the Scion, giving it a Sandskin. With fifteen mana on the table Carlos Romão played Centaur Glade and attacked with the Scion. Zombie Brute and Havoc Demon stepped in the way.

The Scion left the table and the Brazilian used a Death Pulse on the Demon. Or tried to because Diego defend it with Akroma's Blessing. Ostrovich played all the creatures he could and braced for the incoming pain. Each turn meant another three Centaur tokens.

When he reached seven tokens, with two cards left in his deck, the World Champion sent fifteen creatures into the Red Zone towards his own teammate. At sixteen life Diego Ostrovich did, and redid, and redid, the math, setting up his blocks as the clock ticked down.

When he finished time had expired. Damage was dealt and Ostrovich went down to three creatures facing fourteen. He drew his next card and extended his hand.