Round 7: Dirk Baberowski vs. Jens Thoren 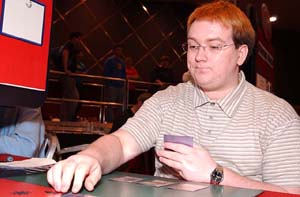 Dirk Baberowski is one of only 4 players with multiple Pro Tour wins on their resumes. The 1998-99 Rookie of the Year had retired from professional and started his own business - a travel agency - but his friend Kai convinced him it would be fun to play at the Team Pro Tour. Since they won that, Baberowski is going to go to PT Osaka to play in the Team Masters event there. He has enjoyed previous visits to San Diego and Nice is only a couple hours from home, and he wants to go to Sydney, so all of a sudden the immensely talented German is back on the Tour.

Oh, by the way, he hadn't lost all day. Neither had his opponent Jens Thoren. The Swedish Thoren hasn't really broken through on the Pro Tour, but he's been doing quite well at European Grand Prix (two Top 8's, including a second), finished 5th at the European Championships, and a number of PT regulars have been touting him as a can't-miss prospect for the Pro Tour.

Game 1 was all about Baberowksi's Braids. It would have completely locked the game if Dirk had gone first, but he had chosen to go second and Thoren was able to play out Mystic Zealot and Aven Windreader before he started sacrificing his lands. Baberowski used Think Tank to go digging for his Repels and Aether Bursts, but his library let him down. He eventually traded Braids for a Mystic Visionary in combat, used Zombie Assassin on Mystic Zealot, kept digging, but never did manage to deal with Aven Winreader. 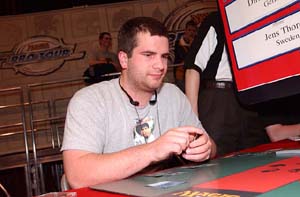 Baberowski once again chose to draw first in game 2, knowing that only that one card in his deck (Braids) was better going first. Baberowski Executed a pair of Cloudchasers, thanks to Scrivener, and used Innocent Blood to kill a Windreader (and his own Infected Vermin). Repel and Ghastly Demise prevented Thoren from getting any defenders into play while Scrivener, Escape Artist, and soon Rotting Giant followed by Aven Smokeweaver served up the beats.

Baberowski played lands on each of his first 11 turns in game 3. Normally that's a bad sign, but his lone creature - a Cephalid Scout - seemed like it might make it all work out just fine. He kept sacrificing those lands to draw cards and he was able to find enough spells to keep Thoren at bay. Unfortunately for Baberowski, he continued to draw lands, winding up with 15 of them versus 7 spells.