Round 7: Do You Have to Declare a Scoop Phase?

By by Marc Calderaro

Both at 4-2, Luis Scott-Vargas and Chris Lachmann have performed well so far, but this last round weighs heavy, as X-3 doesn't look stellar going into Day Two. While the two shuffled up—Lachmann, his consistent green-white deck, Scott-Vargas, a solid red-white—Kyle Sanchez, from the peanut gallery, shouted cheers and chants trying to rile the level-headed pair. Though Sanchez kept them chatty for a bit, things simmered down as they headed into the match. 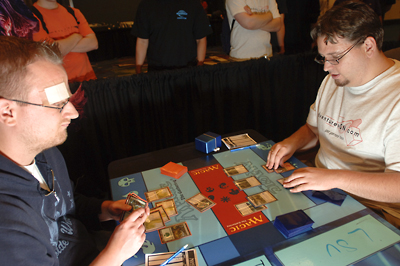 Chris Lachmann and Luis Scott-Vargas study the board as spectators look on.Both kept seven-card hands and Scott-Vargas, on the play, started things off with a turn-three Flickerwisp. Lachmann answered with that always-on-time, turn-three Silkbind Faerie that kept Scott-Vargas's ‘wisp and two newly made Safehold Sentries to a crawl. A turn-five Prison Term on Flickerwisp left Lachmann mana open for his flyer's untap ability, and his second attack brought Scott-Vargas to 18—breaking him down one step at a time. However, in the wars of the untappers, the Safehold Sentry was the victory. After Lachmann tapped one down, it simply untapped, and both Elites went to the red zone, getting in for 2 (as the other was blocked by the Silkbind).

After Wickerbough Elder for Lachmann and Barrenton Medic for Scott-Vargas, the board was close to standstill with Lachmann pinging for one with the flyer. It didn't last long. Scott-Vargas tapped out and played the one-sided Wrath that is Furystoke Giant; that'll certainly mix things up. Lachmann spent a lot of time thinking. He did have seven mana up, and with the Giant on the stack, he tapped both Elites with the Faerie and a Niveous Wisps. Though the Doctor's tapping tricks were able to save him 4 damage, the Giant was still able to clear Lachmann's board. All Chris could do was shrug, then untap.

He tried to re-upped with a Spriggan, but I've heard 1/1s for three don't usually perform too well on defense (though I'm clearly not considering Twilight Drover). Scott-Vargas's next attack brought Lachmann's life total to 6, and the next draw step brought Lachmann picking up his cards.

You know, I fancy myself a quick writer, but this next game saw me at a loss. Apparently players don't need priority to announce their "Scoop Phase."

After both keeping their hands, Lachamnn cast the first stone with a turn-two Elvish Hexhunter. However, a turn-three Silkbind Faerie and a turn-four Wilt-Leaf Liege were enough for Lachmann to pack up his cards and admit and 4-3 record on the day. I guess he didn't have removal.

After the match, Chris Lachmann told me to make up an epic story for this coverage—something about both players having one card left in their library and a gigantic, complex stack war—but I'm sorry, Chris, it's not going to happen.

Lachmann scooped to a turn-four Liege; chalk one up for LSV, and in under nine minutes.