Zabuton Nemonaut is made up of two-thirds of the team that won Pro Tour - New York 2000. Gary Wise and Mike Turian had to find a third player to replace the retired Scott Johns, but they didn't need to look outside of their CMU-TOGIT playtest group. Former U.S. National Champion Eugene Harvey has turned in an impressive pinch-hitting role. It is not unlike having Barry Bonds coming off the bench. The first part of their team name harkens back to Pro Tour Japan when the CMU crowd became obsessed with an expensive--and delicious--cut of meat at a local Korean Barbecue joint. The second part . . . ? 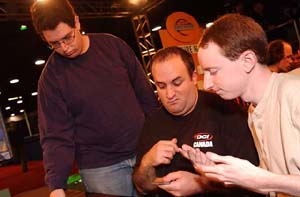 Mount Cleverest features Jeff Cunningham, Tomi Walamies, and Brett Shears. While many teams choose their team names to play off of current Magic lingo (Barns & Noble or the Mixed Bag for example), their choice of team name is further confirmation that Jeff Cunningham marches to the beat of his own drummer and is hands down the funniest guy on the Pro Tour.

Tomi was sitting in the B seat and was calling the draft. While they are all great players, Tomi has the most actual combat experience in the format. He piloted the Finnish national team to a second place finish at Worlds and was looking to improve on that this weekend.

While Mount Cleverest had the benefit of Tomi's experience, no team had put in more practice than the CMU-TOGIT conglomeration. When Zabuton won the flip they elected to receive. Leading up to the event, teams waffled back and forth on which was better, and it seemed to have swung back to receiving. According to Victor van den Broek, the reason for this is largely due to Anurid Murkdiver. Whichever player takes a Nantuko Husk can expect to face the 4/3 swampwalker.

Neither team was unhappy with their draft, although Zabuton had three bomb rares in their decks--Visara, Akroma, and potentially Forgotten Ancient. While Mount Cleverest looked for answers to bomb rares, it was a common that was on Turian's mind during deck construction. "Until he opened that Timberwatch I thought I was certain to win," Turian said. "When he opened that in the last pack the match became more random."

When asked if he could win without drawing Visara, a confident Eugene fanned out an excellent black-red deck with removal and creatures. "My matchup is pretty good."

Zabuton was trying to figure out Gary's exact build--mostly whether or not he would splash for Forgotten Ancient. Normally the splash would be a no-brainer, but he had multiple double black spells as well as the triple white Angel. "Too bad you can't get Dragon Shadow on Akroma," laughed Turian. 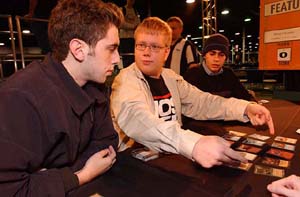 "I have a felling she'll be okay. I didn't have much of a deck after the first pack. Akroma gave me an instant win condition and then two Skinthinners gave me answers to stuff." Then Forgotten Ancient came along to lure him into shaky mana. Gary took the bait and tried to figure out what mana to run, "I have triple white, double black and single green. But if I get the nuts draw . . ."

Mike Turian interrupted and held up a card, "I am playing this Temporal Fissure card and it had better be as-advertised-amazing!" Gary was not too concerned about the threat of Claws of Wirewood: "They can only kill two of my guys with that."

Gary suggested that it may have been more of a counterdraft to keep it out of his hands once he showed green. "I think they took it to protect Tomi--I really wanted it." This led to a discussion of the other team's card evaluations. Gary thought that Tomi overvalued the first Thundercloud Elemental--there ended up being four in the draft--and that he should have taken the Clutch of Undeath instead.

Turian did not understand all of his opponent's picks, "What was up with that Enrage? That pick was just weird."

As you could well imagine, Tomi was concerned about the Angel. "I mainly fear Akroma but I have two answers for her: Complicate and Ixidor's Will." The startling inclusion of Ixidor's Will aside, Tomi was extremely confident running blue-black into a white deck.

"When we place white on the left and they put it in the middle, we get to take so many Soldiers away from them that they end up going Clerics, which is generally bad."

Brett was less confident in his matchup. He had no way to deal with Visara, and his opponent knew it. "Actually I can kill it with a provoker if there is a Warchief in play and I have Solar Blast . . ." He let the thought trail off and just hoped that the Gorgon would nestle deep into his opponent's deck.

Turian explained in a hushed voice, "There weren't any Torrents."

Meanwhile, Jeff was trying to trim some of the more expensive cards in his deck to create a more efficient beatdown package. Brett wanted Jeff to include the Krosan Groundshaker over the Titanic Bulvox. Jeff waved the card in his face, "Brett! You rated this card number one in Scourge!" Jeff eventually included it and a Towering Baloth while cutting the Groundshaker and a couple of other Beasts that did not have morph. With many two drop Elves and a Timberwatch, Jeff was very confident in his match.