Round 7: Ed Fear vs. Alex Borteh 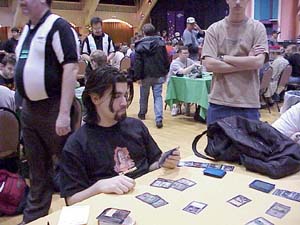 Ed Fear Round 7 at a Grand Prix is always full of tight matches. No one wants to do all that traveling and fail to make day 2. Worlds 2001 runner-up Alex Borteh and Ed Fear found themselves in exactly that situation when they collided in a feature match. Only one of them gets to keep playing.

Borteh kept a one-land draw while going second in the first game. He played his second land – and first island – on turn 3. After burning through Peek, an egg, ad a Words of Wisdom he found himself discarding with no third land in sight. Fear gave him some time, with only a pair of 1-power blue creatures (Aquamoeba and Escape Artist) beating down until turn 5. Fear eventually found a Zombie Assassin and an Organ Grinder, but Borteh swept the board with Sickening Dreams. Fear had the opposite problem, with only seven spells to go with his ten lands. Fear used Cephalid Coliseum to dig up some threats, but by then Borteh was back in the game. Fear tried to race Borteh's ever-growing army with a lone Skywing Aven. He even held back Llawan, Cephalid Empress in case he needed to bounce a flier for the final points of damage. Holding back Llawan turned out to cost him as Borteh hit him with Dreamwinder and then used Morbid Hunger to win the race. Fear defended his play to spectators, insisting that he was going to lose to Morbid Hunger anyway, so his play was better

Llawan was much kinder in game 2. After Fear established a nice offense with Psychatog and Aven Windreader, he unsummoned Borteh's team with the Cephalid Empress. Borteh had to play Crippling Fatigue twice just to be able to play creatures again, but he was way too far behind and they were on to game 3. 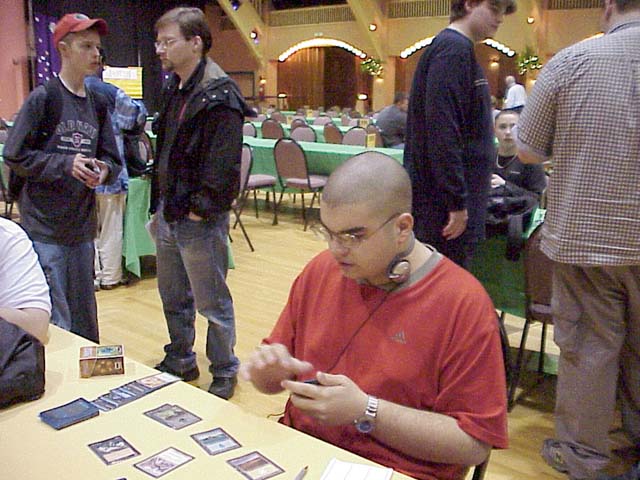 Alex BortehThe pressure was on in game 3. Each player agonized over each move, knowing it might be the difference between success and elimination. They traded creatures and removal for many turns, each winding up at 9 with an empty board. Fear was quite happy to keep trading cards, because he was the one who had an Organ Grinder in hand. It looked like the Grinder was going to outrace Borteh's Balshan Collaborator, but Borteh finally drew the second swamp he needed for Morbid Hunger. As time expired, Fear had a top-deck of his own: Skywing Aven could hold off the Collaborator as long as necessary.

The result of their flurry of top-decking was that neither player could finish off the other before their extra turns expired. They played the game out, just for fun, and Fear won two turns later. Fear was quite upset about drawing a pair of matches where he would have won each with just two more turns. Borteh, however, was fine with the draw: since it was his first of the day it got him through to day 2.