Round 7: Eivind Nitter vs. Olivier Ruel 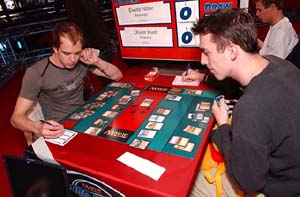 Two of Europe's finest Magic players squared off in the final round of day one. The winner would draft on Saturday, and the loser would go sightseeing.

Well, not Ruel since he lives in this country, but you get the point.

Nitter slammed down an Egg, and Ruel answered back by forcefully slamming Phantom Whelp on the table. Not to be outdone, Nitter went one better by summoning Patrol Hound. Phantom Whelp attacked and Nitter decided to not take the risk of losing the Hound to Shelter or Embolden, and took two. Phantatog also joined Ruel's side, while Nitter brought out Hallowed Healer. Ruel added to the stalemate with Teroh's Faithful, and Nitter had Rotting Giant. A Nomad Decoy came out on Ruel's side to give him some control over the board.

Aven Fisher gave Ruel a way to get through for some damage, but Nitter had Kirtar's Desire. The Decoy tapped down the Healer and the Whelp attacked, but this time Nitter called the bluff and blocked it with the Hound. He chose to not discard a card for first strike, and the dogs traded straight up. Nitter used Morgue Theft to bring his Hound right back. Phantatog attacked and was blocked by Patrol Hound. A land was discarded to pump the 'Tog, but Nitter had Embolden to keep his creature alive. Caustin Tar would have been bad news for Ruel, but he had Circular Logic. Four lands were discarded to Phantatog to gain threshold, and the Decoy tapped down two of Nitter's creatures to clear the way for an attack.

The board continued to be locked up, as Ruel brought out a Patchwork Gnomes, and Nitter had a pair of Militant Monks. Breakthrough for three gave Ruel some extra cards, and Nitter had Mystic Zealot. Ruel continued to gain card advantage, bringing back Circular Logic with Scrivener. Soul Scourge was cast by Nitter, but it would take a lot for it to get through, especially after Ruel played a Zealot of his own. The board was at quite a stalemate, although Ruel had the upper hand thanks to his Decoy with threshold. Nitter used Kirtar's Desire to nullify the Zealot, but Ruel used Shelter to remove it and go up yet another card.

Nitter sent a huge Mind Sludge at Ruel, drawing out the Circular Logic. Ruel used his own Kirtar's Desire on Nitter's Zealot, which cleared the way for his own. With the assistance of his Decoy tapping down healers, Ruel seemed to be finally breaking the stalemate. However, Nitter had a Shelter, and targeted his Zealot to take away the Desire. The board was now back to square one. Ruel summoned Aven Flock to build up the air a bit more. 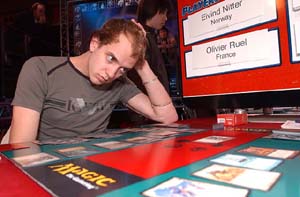 Nitten drew, and said "Oh my God!" a few times with a stunned look on his face, as Ruel clutched his Pooh bear and cowered in fear. Crippling Fatigue targeted the Aven Flock with Ruel tapped out, and Gloomdrifter hit play to annihilate the board. The end result was Soul Scourge, Gloomdrifter, Rotting Giant and Mystic Zealot on Nitter's side, and only a Zealot and Teroh's Faithful on Ruel's. Still, Ruel bounced back, summoning Auramancer to bring back Kirtar's Desire, which was played on Nitter's Zealot. A second Desire was played on the Gloomdrifter, and Ruel attacked with his whole team. Soul Scourge blocked the Zealot, and Rotting Giant blocked the Patrol Hound to kill it. This brought Nitter to one life point. Ruel continued on the offensive on the following turn by playing Strength of Isolation on his Auramancer. With Nitter at one, the last point of damage was squeezed out to give Ruel the first game.

Ruel kept a one land hand, and it obviously didn't pay off as Ruel missed his second land drop, but found another land on turn three. Still, he was stuck at two lands, and Nitter was going full speed ahead, bringing out Rotting Giant and Militant Monk. Ruel slowed down the beats with Kirtar's Desire, but Nitter kept the offense coming by summoning Soul Scourge. Ruel scooped soon after.

While laying out his seven card hand, Nitter accidentally flipped over an Aven Cloudchaser, which is a big deal in a matchup involving so many Kirtar's Desires. I can't do Ruel's reaction justice. Nitter simply banged his head against the table. 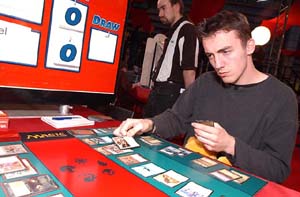 Mirror Patrol Hounds started the game off, and Ruel sent his in for two points. The second time, Nitter had mana available so he blocked. Ruel gave his Hound first strike, discarding Strength of Isolation, which he played on the dog. Nitter used Shelter to save his Hound, and brought out Aven Cloudchaser to kill off the enchantment. Ruel cast Kirtar's Desire to stop Nitter's Patrol Hound, and a Soul Scourge was countered by Ruel thanks to Patrol Hound madness casting of Circular Logic. Both Patrol Hounds traded to clear up the board a bit, and it was now simply Nitter's Cloudchaser against Ruel's Patchwork Gnomes.

Nitter then played Caustic Tar to break the stalemate right in half. Morgue Theft brought back the Soul Scourge, but Ruel had yet another Circular Logic. Ruel delayed the inevitable with Teroh's Faithful, but the end was inevitable, as Nitter flashed back Morgue Theft to get back Soul Scourge. That was enough to advance Nitter to day two.