Round 7: Eric Froehlich vs. Eugene Harvey 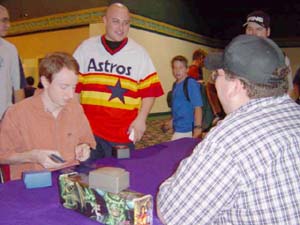 Eugene Harvey showed up for the match as I was sitting down getting ready to cover the match. Suddenly a kid showed up.

It took a few minutes to convince him we were not in his booster draft and that this was a GP feature match.

"Who are you?" He asked Eugene Harvey.

Suddenly the kid's eyes got very wide with a giant "oh my god" look on his face. Eric sat down and he wondered.

The kid then related to me how Eric was the genius behind the "First Pick" article in the sideboard. He told me about how those crack heads Kibler and Budde always pick the wrong card and how Eric actually knows what he's doing. These two players have one thing in common. Both of them had amazing accomplishments last year and everybody knows their names. Neither of them are recognized too quickly in person though.

"There's no way Persuasion is better than Beast Attack!"

Eric told us how he actually picks the blue card in the next article. Eventually the kid went away and I am treated to a very long, slow matchup of Eugene's Mirari's Wake/Time Stretch deck vs. Eric's Zombie/Upheaval.

Eugene had a slow and deliberate play style with this deck. He went to work on the Upheaval deck immediately. First he Quiet Speculated for a Deep Analysis, Flash of Insight, and a Moment's Peace after only seeing an island from Froehlich. The next three turns he flashed back the Analysis, played a Compulsion, and then a Mirari's Wake. Eric's side of the board was very silent through all this. He played nothing until turn four when he played a Deep Analysis. Eugene took complete control after the Mirari's Wake thanks to his Compulsion. He went deep into his deck while Froehlich could only play a Zombie Infestation and attacking for 2 several turns in a row. Eugene dropped a Holistic Wisdom into play and when he resolved a Time Stretch a few turns later, Eric conceded. 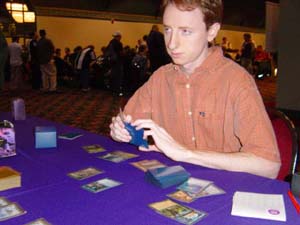 The next game Froehlich made the first play with a turn two Standstill. This did not seem to bother Harvey. He played a Krosan Verge on turns 2 and 3 and didn't miss a land drop to have 7 lands at the end of his fifth turn. He then broke the Standstill with a Flash of Insight. On his turn he played a Mirari's Wake and played a Living Wish for a Skyshroud Expanse because he was low on blue mana. On his next turn he played a Compulsion, activated it twice, played a Deep Analysis and dropped a Hollistic Wisdom. All was for not on the next turn though when Eric forced an Upheaval through Eugene's Syncopate.

This was not so critical however. Eugene had his Wake back five turns later. The next turn he resolved a Kirtar's Wrath. Froehlich played a Grotesque Hybrid to stop the two 2/2 fliers, but Eugene returned it to his hand, then played a Holistic Wisdom again. Then next turn he played Time Stretch and Eric conceded.