Round 7: The Essence of the Game 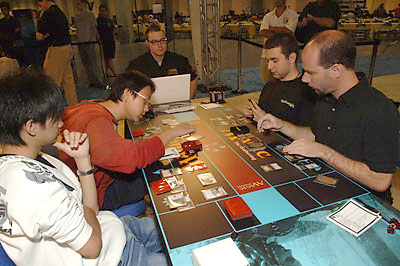 Invitational Winner Terry Soh and his brother Joe face off against Hall of Famer Dave Humpherys and Steve Sadin.

erry Soh needs little introduction as a former Invitational winner and multiple Pro Tour Top 8er. The Rakdos Augermage's brother Joe, on the other hand, is a face that readers might not so readily recognize. Still, with the help of his more famous brother he managed to earn a slot here through a PTQ, and despite Joe's lack of Pro Tour experience, the duo seems to work well together as a team. Unlike many of their compatriots, they share physical drafting responsibilities, diligently splitting each set of picks in half while drafting so that both teammates are holding some of the cards. That teamwork mentality has paid off for the Malaysians as they enter Day 2 in a solid first place finish at the top of the field.

Their opponent's for this round are no slouches either. Dave Humpherys is a YMG Hall of Famer who grandfathered in the otherwise unqualified Sadin despite not playing 2HG until this past Thursday. It would seem that a million Pro Points and experience goes a long ways towards being a quick-study.

Terry managed to beat Steve in the die roll, and he and his teammate decided to play first. Joe didn't like his hand, however, and threw it back, looking for a fresh seven. After determining that those were okay, it was Humpherys's turn to mulligan. After conferring with his teammate, they opted to stick with the second hand of seven as well.

The first play of the game offered up an Essence Warden from Terry, which forced Dave to pause to read the card.

Dave: "Yeah. It was a different color though…"

After a few turns of play, it looked like the match was a pseudo-mirror: both teams had a red-green deck (with Steve and Terry playing them for their respective teams) and each had a blue-X build. Joe opted to pair Plains with his Islands, while Dave went with Swamps.

The early Essence Warden had done some work for the Sohs. They had gained 2 life with it as well as dropping their opponents to 28 by putting it on the offensive. In addition, when Steve and Dave had answered it with Dead // Gone, the Sohs had the trump in Gift of Granite. The board stood with Steve and Dave on a lonely Nessian Courser while Joe and Terry had a Thallid Shell-Dweller, a suspended Infiltrator il-Vec, and a 1/3 Essence Warden.

Trying to make sure they stayed caught up with their opponents, the Americans added an Urborg Syphon-Mage and Wormwood Dryad to their side of the table. Unfortunately for them, the Essence Warden meant their opponent's life totals kept creeping higher and higher, and soon began nearing 40. To make matters worse, on the Malaysians' next turn, their Infiltrator came in off suspend and Terry was able to make a Kavu Primarch with the kicker paid.

Dave played a main-phase Venser's Diffusion targeting the Primarch, then Steve followed up with a Flowstone Embrace targeting Joe's Aven Augur. In addition to dealing with those two threats, the Americans looked to run away with the turn, playing Grapeshot with a storm count of two and choosing 2 damage to hit Joe's morph and 1 to hit his Infiltrator.

But Joe had some tricks up his sleeve as well. A Mana Tithe on the copy targeting his Infiltrator kept the 3/1 alive, as Sadin was tapped out from playing all of his spells. Then Joe returned two Islands to his hand to flip up his morph, revealing Fathom Seer. That effectively countered the other copies of the 'Shot, and Dave and Steve were left bashing with their Courser and Urborg Syphon-Mage, dropping their opponents to 34. 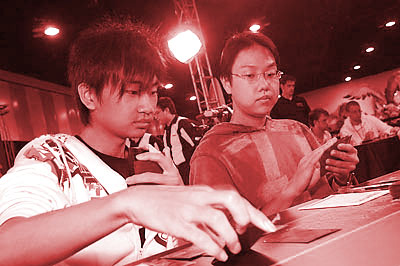 Tempo seemed to be firmly on the side of the Soh brothers and the Americans were definitely backpedaling. A Shivan Meteor dealt with Dave's Urborg Syphon-Mage, meaning Terry would be the only one gaining life (thanks to his Essence Warden). That card was proving particularly troublesome. Because the Americans were behind on tempo, their hope seemed to lie in racing the Soh brothers as best they could, hoping for a bit of luck to come through for them. However, because the Warden was slowly accumulating enough life to undo the occasional attack, that plan wasn't looking to work.

The board stood at 35-20 in favor of the Malaysians. Their creatures were Mistmeadow Skulk, Jedit's Dragoons, Knight of Sursi, Infiltrator il-Vec, and Fathom Seer for Joe, while Terry had a kicked Kavu Primarch, Thallid Shell-Dweller, Essence Warden with Gift of Granite, and one Saproling. Dave and Steve, on the other hand, had Nessian Courser, Penumbra Spider, Wormwood Dryad, Whip-Spine Drake, Jodah's Avenger, and a Veiling Oddity counting down from four. They spent a good portion of each turn in the tank, trying to make sure they didn't make any mistakes in an effort to dig themselves out of a tight, but not unwinnable, spot. For fans of Humpherys that comes as no surprise, as the Pro Tour Champion has long been described as "meticulous."

The Soh brothers looked to completely put things away, utilizing their advantageous board position with the backbreaking Boom // Bust. Tapped out, Dave and Steve could do nothing but discuss what their next play was going to be before destroying all of their lands. After the end of the turn, Terry and Joe stood at 41 life with an overwhelming board position and an Essence Warden that the Americans were still struggling to contain.

Dave and Steve weren't out yet, though. Dave's Jodah's Avenger was plinking away at the Soh's life total, gaining vigilance and shadow each turn to attack for 2 (and still being up for defense to stop the Infiltrator il-Vec). A gang block had managed to kill the Kavu Primarch for a meager two-for-one, and their Veiling Oddity continued to tick down. Not looking to lose the race, the Soh brothers opted for an alpha strike, sending in a Jedit's Dragoons, Mistmeadow Skulk, Fathom Seer, Essence Warden, and two Saprolings.

Death Rattle took out the Dragoons, Spider sucked up a Saproling, and the Avenger stopped the Infiltrator. When the smoke cleared it was 40-6 in favor of Terry and Joe, who added two Knights to their board position after the attack: Riftmarked Knight and Blood Knight. Dave and Steve, however, had only Evolution Charm on their turn, searching up a Mountain for Steve, which he played.

A second alpha strike from the Sohs cost them a few more threats but dropped the Americans to 2, and it was make or break time for the Hall of Famer and the Grand Prix Champion. Their Oddity came into play but only served to allow the Avenger to get in for 4. A Conflagrate killed a Saproling, and Terry and Joe were left only able to swing with their Mistmeadow Skulk as its protection ability gave it evasion against the American's board. That move left their opponent's on a single, precious life. 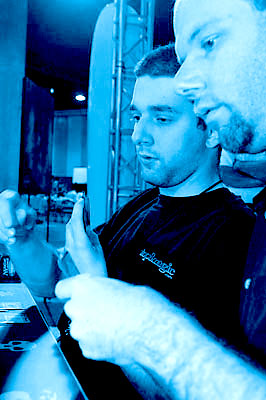 …and the Americans get the blues.

During the American's next turn, they had a question for the judge: would flashing back the Conflagrate by discarding a single card create a converted mana cost of less than three, allowing them to kill the Skulk? The judge explained that, with two Xes in the mana cost, it would not, and that was nothing but bad news for Steve and Dave. They opted to attack with their vigilant Avenger and, surprisingly, their Penumbra Spider. The Soh brothers, fearing shenanigans, put their Thallid Shell-Dweller in front of the 2/4 and Steve revealed they had guessed correctly: Brute Force took down the 0/5. However, the damage the Avenger got in for was considerably less than the 40+ needed to earn them the victory, and when Joe didn't forget to attack with his Skulk, Steve and Dave extended the hand.

Some critics have derided the 2HG format for being too "luck-based" but this match seems to be a solid example of why that isn't the case. The Soh brothers' innovative use of the little-played Gift of Granite allowed them to save their Essence Warden seemingly out of nowhere during the very early stages of the game. The Warden then went on to gain them the life they needed in order to maintain an edge in the matchup and earn the win. It is that type of thinking outside the box in addition to their honed skills working together that merits their standing at the top of the field.