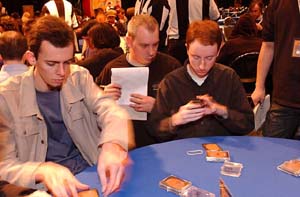 The Netherlands and the United States are both on the short list of teams expected to well in this event, but after Day 1, neither country was in the Top 5. Now their National Champions must square off in a match that will set the tone for the rest of the event.

Tom van de Logt won last year's Worlds, and Eugene Harvey finished in the Top 16 and help the US take the team title, so neither are strangers to this level of competition.

In the draft, Tom cut Eugene off from blue, a situation that Eugene complicated by counterdrafting red cards when it looked like van de Logt might switch. Neither deck is amazing, so the match may come down to who can make the best use of his mediocre cards.

Harvey was playing second but drew first blood with a Chatter of the Squirrel token. Van de Logt put out a Hallowed Healer to stop the beats, and then used Rites of Refusal to counter Eugene's Elephant Ambush.

Eugene kept playing out creatures—Seton's Scout, Harvester Druid, Wormfang Drake, and Nantuko Tracer. He played Exoskeletal Armor on the Drake to empty his hand. A Floating Shield (green) on the Healer meant the only the Drake could get through for damage, and van de Logt added a Tireless Tribe and a Blessed Orator to gum up the ground. The Tribe forced Eugene to comment, "Your deck's great."

More creatures hit the table for Eugene – Scrivener, Arrogant Wurm, and Elephant Ambush (retrieved by Scrivener). Van de Logt was able to stop Eugene's attackers for a little while by blowing up the Exoskeletal Armor with Floating Shield and discarding Wonder to the Tireless Tribe, but Eugene kept pushing his guys in the Red Zone and van de Logt succumbed.

Van de Logt, down a game and playing first, dug himself a grave by mulliganing twice. His five-card hand was three land, a Stern Judge, and a Shelter. 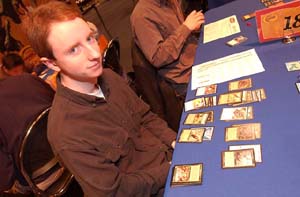 Eugene could not capitalize, playing a Seton's Scout as his only creature for the first six turns. Van de Logt forces were not impressive—Stern Judge, Benevolent Bodyguard, and Tireless Tribe—but they were able to attack, and Eugene found himself down to 11 life.

Eugene made a few awkward plays, like casting Grip of Amnesia on his own Simplify and then a Howling Gale with no fliers in play, just to get threshold so his Scout would grow to 4/3. Harvey's attempt at Treacherous Vampire (one of two black spells in his deck) was nailed with a Rites of Refusal, but he did get a Wormfang Drake into play to stop Tom from attacking.

But Eugene's one swamp was enough to keep Stern Judge busy, and Eugene's like fell in one-point ticks until he conceded, having drawn no good offensive cards.

Tom started off with two 1/1 beaters—Tireless Tribe and Benevolent Bodyguard—and had the Rites of Refusal for Eugene's first play, a mid-attack Elephant Ambush. Eugene was down to 15 when his first creature hit the table, Arrogant Wurm. A Peek showed the coast was clear for Treacherous Vampire on his next turn, and suddenly van de Logt was on the losing end. He kept drawing land, land, land, and Eugene drew a Scrivener and was able to make an Ambush token. Benevolent Bodyguard and Tireless Tribe were not enough for van de Logt.